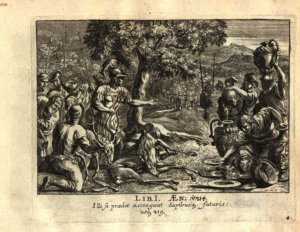 There is a classic passage in Vergil’s Aeneid in which Anchises commends to future Romans what is, in effect, the “mission statement” for the Roman Empire. In these lines, the father of Aeneas is telling us what his son Aeneas, the Trojan who has journeyed from the fallen city of Troy, will set in motion as the original founder of Rome’s illustrious future in Italy.

Of course, the stated ideals of the passage are historically anachronistic. But the wonderful thing about this little bit of poetic license is the way Vergil affirms the greatness of Rome. The source of the “Pax Romana,” Vergil is saying, resides in the original efforts of these Trojan immigrants, refugees from a war-torn land, who have come to found a better way of life in a new country.

Vergil’s poetry here credits Rome’s greatness not to a genius for arts and sciences, because, in that realm, classical Greece is the unsurpassable exemplar. Rather, Vergil points to the military and political example of Rome which is most distinctive and eminently worthy of celebration: namely, a political tradition dedicated to cultivating exemplary human virtue, and a military tradition that finds true honor only in waging just war:

Others may fashion more smoothly images of bronze
(I for one believe it), evoke living faces from marble,
plead causes better, trace with a wand the wanderings
of the heavens and foretell the rising of stars.
But you, Roman, remember to rule the peoples with power
(these will be your arts); impose the habit of peace,
spare the vanquished, and war down the proud![1]

And yet what is often overlooked by readers of Vergil today is how this aspirational excellence in military and political affairs is also yoked with an implicit philosophy of life. While Greek philosophy tends to occupy the scholarly spotlight, the historical reality is that philosophy, as a lived reality, actually animated the Roman efforts that supplied the world with the high ideals endorsed by the imperial “Pax Romana.”

A good example of how this implicit philosophy of life governed Roman efforts to cultivate virtue on a daily basis may be seen in Stoic dietary practices. Dr. Kevin Vost, who has written a wonderful book published in 2016 by Angelico Press, The Porch and the Cross: Ancient Stoic Wisdom for Modern Christian Living, has also described how part of the shining example of the most virtuous of the Romans is the way they virtuously embraced moderation in their eating habits.

Interestingly, modern science has affirmed how effective this diet is at promoting human health. Recently, Vost has noted the similarity between what the Roman Stoic Musonius Rufus recommended and what today’s scientifically recommended “Mediterranean Diet” accomplishes in the human organism. Dr. Vost observes:

“The base of this diet’s pyramid is formed by a daily predominance of fresh fruits, vegetables, whole grains, nuts, beans, legumes, herbs, spices, and olive oil, with at least a few weekly servings of fish and other seafood, less frequent and moderate portions of eggs and dairy foods including yogurt, a very limited intake of meat and sweets, and the optional consumption of red wine in moderation.”[2]

There is a remarkable textual record of what Musonius Rufus had advised in lectures to those Romans whom he taught to pursue the heights of Stoic virtue. Musonius argues in a distinctively Stoic way for harmony with nature, by observing that the best foods for a human being are the ones most in harmony with human nature:

“Just as one should choose inexpensive food over expensive food, and food that is easy to obtain over food that is hard to obtain, one should choose food suitable for a human being over food that isn’t. And what is suitable for us is food from things which the earth produces: the various grains and other plants can nourish a human being quite well. Also nourishing is food from domestic animals which we don’t slaughter. The most suitable of these foods, though, are the ones which we can eat without cooking: fruits in season, certain vegetables, milk, cheese, and honeycombs. These foods are also easiest to obtain. Even those foods that require cooking, including grains and some vegetables, are not unsuitable; all are proper food for a human being.”[3]

By cultivating the virtues of temperance and self-control when it comes to eating, argues Musonius, the indispensable foundation is laid for the cultivation of even greater virtues, such as those won in the realm of military and political affairs, which are devoted to the pursuit of justice. Now, it is usually not appreciated, but this holistic vision of virtue, which unifies all the virtues by seeing them as mutually necessary, is also something of which the poet Vergil is acutely aware.

There is a passage in the Aeneid that we should also place beside the one above in which the virtue of “pious Aeneas” is credited with being the original source of the grandest virtues of the imperial “Pax Romana.” It is a passage in which Aeneas and the Trojans who have come to Italy with him are credited with the innovation of the humble Italian pizza. Yet this is in reality no small innovation, because the fact that it takes place on Italian soil is bound up, in Vergil’s telling, with Anchises’ prophecy of the future destiny of the greatness of Rome:

settled their limbs under the branches of a tall tree,

and spread a meal: they set wheat cakes for a base

under the food (as Jupiter himself inspired them)

and added wild fruits to these tables of Ceres.

When the poor fare drove them to set their teeth

into the thin discs, the rest being eaten, and to break

the fateful circles of bread boldly with hands and jaws,

said no more than: “Ha! Are we eating the tables too?”

That voice on first being heard brought them to the end

of their labors, and his father, as the words fell

from the speaker’s lips, caught them up

and stopped him, awestruck at the divine will.

Immediately he said: Hail, land destined to me

by fate, and hail to you, O faithful gods of Troy:

Anchises (now I remember) left this secret of fate with me:

Son, when you’re carried to an unknown shore, food is lacking,

and you’re forced to eat the tables, then look for a home

in your weariness: and remember first thing to set your hand

on a site there, and build your houses behind a rampart.’

This was the hunger he prophesied, the last thing remaining,

and with the sun’s dawn light let’s cheerfully discover

what place this is, what men live here, where this people’s city is,

and let’s explore from the harbour in all directions.

Now pour libations to Jove and call, with prayer,

on my father Anchises, then set out the wine once more.

So saying he wreathed his forehead with a leafy spray,

and prayed to the spirit of the place, and to Earth the oldest

of goddesses, and to the Nymphs, and the yet unknown rivers:

then he invoked Night and Night’s rising constellations,

and Idaean Jove, and the Phrygian Mother, in order,

and his two parents, one in heaven, one in Erebus.

At this the all-powerful Father thundered three times

from the clear sky, and revealed a cloud in the ether,

bright with rays of golden light, shaking it with his own hand.

Then the word ran suddenly through the Trojan lines

that the day had come to found their destined city.

They rivalled each other in celebration of the feast, and delighted

by the fine omen, set out the bowls and crowned the wine-cups.[4]

What is worth noting in this passage, which attributes the invention of the distinctively Italian-style pizza to Aeneas and his men, is its affirmation of the “Mediterranean Diet.” This diet is exemplified in the simple sort of “margherita” pizza still characteristic today of the Romans. The basic recipe of tomatoes, cheese, and basil is suggested by the way Aeneas and company chose the “wild fruits” of nature to constitute the original Roman pizzas. This harmony with rustic nature, which readily supplies to humans the elements of a diet most suited to their own nature, is echoed in Musonius’ virtuous dietary advice for Stoics.

Not only that, the most charming element of this episode resides in the way the invention of the pizza’s distinctive crust results as the fulfillment of a world-historical prophecy. Instead of the need for tables, plates, or cutlery, the invention of pizza here suggests an original virtuous harmony of the Roman “Mediterranean Diet,” in which temperance subordinates such civilizational trappings (tables, plates, cutlery) as optional accoutrements extraneous to an original divine inspiration about what is most important: namely, virtue. Accordingly, Ascanius, the son of Aeneas, cries out:

“Hey! We’re even eating our tables!” are his words, and they invite us to liken the pizza crust in this passage to a plate or to the top of a table. Consider the philosophical significance of the pizza crust: It is a very practical innovation that resonates strongly with the renowned Roman practicality that is able to accomplish great things in the realm of politics and military action.

After all, what food is more practical for virtuous Romans than pizza, which does not require any furniture, or insist that we waste time washing dishes? Once you finish off the crust, you’ve disposed of the impractical need for table and plates! Thus, young Ascanius’ joyous cry is still echoed throughout the ages, especially by many a university student who has discovered the practicality of such Roman dining as a staple during stressful and busy exam times.

Moreover, the fact that such pizza symbolizes a “Mediterranean Diet” bringing the nature’s countryside abundance in harmony with human nature is yet another stroke of Vergil’s poetic genius and shows his unerring instinct for indelible images. Surely Musonius would smile at this endorsement of the Roman Stoic requirement that all virtue must first begin with temperance in eating. On a daily basis, such self-control is also a reminder and affirmation of one’s dedication to all the higher virtues.

So why not dine today like a good Roman, and thereby start to become all you can be?

This was originally published in The Imaginative Conservative on May 6, 2016.