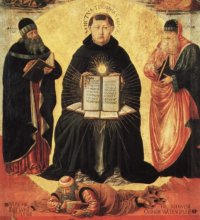 Natural law is both a moral and legal theory that posits the existence of a law whose content is set by nature and therefore has validity everywhere. As a moral theory, natural law claims moral standards that govern human behavior are in some part objectively derived from the nature of human beings and the world; as a legal theory, natural law asserts that the authority of legal standards are in some sense derived from the considerations of the moral merit of those standards. While being logically independent of each other, the two theories do intersect with each other: both claim that some laws depend on their authority on their relationship in which they stand not to preexisting convention but to moral standards.

Greek philosophers, particularly Plato and Aristotle, emphasized the distinction between nature (physis) and conventional law (nomos). While the content of law varies from place to place, the content of nature is the same everywhere. Natural law therefore not only functions as a standard by which to criticize the content of conventional law but also determines what the law said in the first place. As a result, the state is bound by natural law and becomes the institution directed at bringing its subject happiness, whether temporal or other-worldly salvation. This classical conception of natural law was promulgated by the Roman Catholic Church as set forth by philosopher and priest Thomas Aquinas (1225–1274).

According to Aquinas, humans are social and political animals as well as naturally religious. The natural law applies to humans alone as conscious, rational, moral, and social creatures, teaching them to avoid ignorance and not to give offense to others. Through reason, all humans can naturally and equally know the one standard of truth in the natural law. But when it comes to particular conclusions drawn from the eternal moral principles of natural law, although the standard of truth remains fixed (primary precepts), the specific circumstances of its applications vary (secondary precepts). As history changes, the secondary precepts also change in particular cases, but the natural law is not altered but added to.

This concept of natural law had entered mainstream Western culture through the writings of medieval Islamic scholars like Averroes, whose Aristotelian commentaries influenced Aquinas’ understanding of natural law. Averroes wrote that the human mind alone could know the higher intents of Islamic sharia, like the protection of religion and life, as well as the unlawfulness of certain offenses such as theft and murder. The concept of istislah in Islamic law also bears some similarities to Aquinas’ natural law: whereas Aquinas’ natural law deems good that which is self-evidently known as it tends toward the fulfillment of the person, istislah calls good whatever is connected to the five basic goods of Islam. The largest Islamic school of thought that posits the existence of natural law is the Maturidi School, which teaches that the human mind can know the existence of God and the major forms of good and evil without the help of revelation.

Aquinas’ conception of natural law spread to the School of Salamanca where in the sixteenth century scholars like Francisco Suárez (1548–1617) and Francisco de Vitoria (ca. 1483–1546) further developed a philosophy of natural law in the Catholic tradition. The Protestants Hugo Grotius (1583–1645) and Samuel von Pufendorf (1632–1694) also made significant contributions to natural law theory. Grotius based his philosophy of international law on natural law and insisted on the universal validity of the natural law even if God were not to exist. Likewise, Pufendorf based his theory of natural law not on God but on the sociability of humans and held that every person, on the basis of human dignity, had a right to equality and freedom.

In England, theologian and preacher Richard Hooker (1554–1600) adapted features of Aquinas’ natural law theory into Anglicanism, and legal scholar and judge William Blackstone (1723–1780) used natural law in determining the contents of common law, although it was not identical with the laws of England. But it was English philosopher Thomas Hobbes (1588–1679) who had the greatest influence on natural law by seeking to replace it with legal positivism. According to Hobbes, law is not an expression of higher principles or morality but simply the articulation of the will of the authority that created it. Natural law therefore is subordinate to positive law: the natural law—how a rational human being could survive and prosper—could exist only if humans first submitted themselves to the authority that had created the law. For Hobbes, natural law was discovered by considering natural rights first, whereas previously it could be said that natural rights were discovered by considering the natural law first. The supremacy of legal positivism over natural law would be continued and advocated by such subsequent thinkers as Jeremy Bentham (1748–1832), Hans Kelsen (1881–1973), and H. L. A. Hart (1907–1992).

There is considerable debate about whether John Locke’s (1632–1704) conception of natural law was more akin to Aquinas’, as filtered through Hooker, or a revision of Hobbes’ interpretation. According to Locke, God’s natural law provided that no one ought to harm another in life, liberty, or possessions and therefore give each person a natural right to his or her life, liberty, and property. If the sovereign went against the natural law, people could justifiably overthrow the existing state and create a new one. The notions of equality under the law, limited government, and the state’s purpose to protect life, liberty, and property would influence subsequent liberal thinkers and seminal documents, such as the Declaration of Independence.

Contemporary natural law jurisprudence has been undergoing a period of reformulation with John Finnis, Germain Grisez, Robert P. George, and Joseph Boyle as its leading scholars. This New Natural Law School focuses on questions of the intrinsic value and incommensurability of basic human goods, the resolution of conflict as an evolutionary process, and the content of law as determined by moral principles. It is this last question about natural law that has been particularly revisited by scholars who are preoccupied with natural law as a moral as opposed to a legal theory. As it had divided Aquinas’ views from those of John Duns Scotus, William of Ockham, and Francisco Suárez, the question of natural law’s intrinsic moral authority continues to be an issue between the likes of Grisez and Finnis, on the one hand, and Robert Adams and John Hare, on the other.

From the Multiversity: Three Reformations