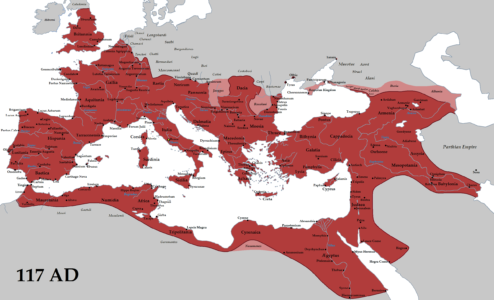 What made the Roman Empire an empire like no other was that it alone was the city that became an empire. Its distinctively republican civic form became propagated by the Roman Empire as it spread across Europe. It then became transmuted by its contact with Christianity, which gave birth to a mediating political form unlike any other.

This is the thesis of the French Catholic philosopher Pierre Manent, who has studied the problem of political form. In between the forms of the city and of the empire, there is the unique mediating form of the nation. The nation, says Manent, was Christianity’s contribution to a politics seeking mediation and moderation.

The struggle to define a Christian politics of moderation is visible in the historical standoff between Church and Empire. This standoff occurred during the “constituent divisions” of Europe (the phrase is Remi Brague’s) that are marked off by Christopher Dawson’s Six Ages of the Church.

Brague’s first dichotomy, the pre-Christian evolution and definition of Western culture, dividing the Greco-Roman West of the Mediterranean against the barbarian East, is visible in Dawson’s first two eras of the Church. Christianity’s creative revolution, true to its religious principle of humble “secondarity” in relation to Israel, first goes Greco-, and then Roman. First, it penetrates the Roman Empire with the subterranean “Hellenizing” enculturation process (the Gentiles are converted, the New Testament is written in Greek, etc.). Then, it goes fully Roman, achieving political success against those who would deny its essential compatibility with the vivifying principle of the Roman Empire: “secondarity.”

In the Third Age, which we can see beginning with the loss of the Christian East (Antioch and Alexandria) and especially the Muslim conquest of Jerusalem, it is Roman “secondarity” that permits a rebirth. Brague’s second constituent dichotomy here becomes visible in history: The Christian North divides against the Muslim South.[1]

The loss of the South is met, on the other hand, with the successful mission to the barbarians of the North. Monasticism, which was of Egyptian origin,[2] now flowers in the North, as Pope St. Gregory I sets the rebirth in motion. In time, the classic formation of Christendom symbolized by Charlemagne occurs. But eventually the decline of the Holy Roman Empire, under pressure from the forces of secularism and barbarism, leads to the need for another rebirth.

In the Fourth Age, we can see the renewal of monastic life becoming what turns things around. The innovation of Duke William I of Aquitane in 910 kicks off the long cooperation of the papacy with the reformers (recall Pope St. Gregory VII, a Cluny monk, 1073). The founding of the Benedictine abbey of Cluny that would report directly to the Pope, and thus in effect empower a new local spiritual vitality (i.e., a decisive independence from corrupting local interests), is what catalyzes the reform process.

This reform peaks in the Fourth Age with the schools and universities animated by the new spirit of the reforming mendicant orders, the Franciscans and Dominicans. But the Fourth Age declines with the breakdown of the papal alliance with these mendicant orders and the revolutionary assault of new reform movements, leading to the effective defeat of the papacy at the hands of the new national monarchies. In this regard, we may think of Philip IV of France [r.1285-1314], Boniface VIII [r.1294-1303] and the 1302 papal bull Unam Sanctam,[3] and the beginning of the Avignon papacy. All these forces bring Europe to the low point of the Great Schism (1378-1417)[4] and, exacerbating the divisions of Christendom, the Protestant Reformation at 1517.

Looking back at this Fourth “Middle” Age we can see exhibited Brague’s third constituent division of Europe’s scarred history, that of the Latin Catholic West against the Greek Orthodox East.[5] For we all know the so called “Middle Ages” (more properly named as the period of Dawson’s “Fourth Age”) to be the classic period of the rise of the Latin West and its unique “standoff”—foreshadowed in the decline of the Third Age—between Pope and Emperor. This is a uniquely Western dynamism not found in the Byzantine East or elsewhere.[6] Again, it is a direct consequence of what made the Roman Empire unlike any other: the creative tensions unleashed by Roman “secondarity.”

The Fifth Age exhibits Brague’s fourth and final dichotomy marking the “scarred memory”[7] of Europe, the age of divided Christendom. The North European Reformers divide against the Catholic South and the acutely secularized Renaissance papacy.[8] The Counter-Reformation is a period of rebirth, with its new religious orders (think St. Ignatius of Loyola), new missionary activity in other directions (think St. Francis Xavier), and a new Christian humanist educational ideal, visible in the Baroque synthesis (that Christian re-incarnation of the preceding Renaissance).

The Scholastic masterpieces of John of St. Thomas in philosophy and theology symbolize the heights reached at the peak of the Fifth Age. (John of St. Thomas is a master I highly esteem, as did Jacques Maritain and, more recently, John Deely.)[9] This new rebirth of Roman Catholicism in Dawson’s Fifth Age is then countered with the Enlightenment and the wars of religion, which bring Europe to the new low point of the destructive French revolution and Napoleon.

Since then, we live with all the fallout of this new Secular Age (Dawson’s Sixth Age). Perhaps the best resource, for an historical consciousness trying to come to grips with the possibilities of spiritual and cultural rebirth, is to grasp what made Rome historically unique.

The Roman Empire was an empire like no other because of its unique principle of moderation in politics. Call it “secondarity” with Brague, if you will. But whatever you call it, it is what permitted the unique dynamism of a uniquely changing but uniquely enduring political form: from city, to empire, to nation. And that dynamism may still propel us today as a principle of rebirth, if only we recapture its essence.

Essentially, it is what can survive any wound, any division, because its heart still beats, thanks to the spirit of reform that mediates and moderates in an Incarnational way.

[3] “We declare and define and pronounce that it is necessary for salvation that all men should be subject to the Roman pontiff.” The bull begins: Unam sanctam ecclesiam catholicam et ipsam apostolicam urgente fide credere cogimur et tenere, nosque hanc firmiter credimus et simpliciter confitemur, extra quam nec salus est, nec remissio peccatorum… (“We are compelled, our faith urging us, to believe and to hold – and we do firmly believe and simply confess—that there is one holy Catholic and Apostolic Church, outside of which there is neither salvation nor remission of sins…”).

This was originally published in The Imaginative Conservative on November 9, 2015.