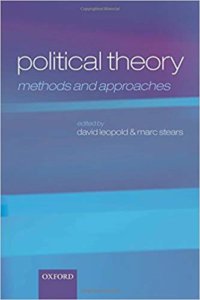 As their book opens, “Political theorists are often silent on questions of method and approach,” David Leopold’s and Marc Stears’ Political Theory: Methods and Approaches addresses this gap in the subfield of political science. While acknowledging that the Cambridge School, Leo Strauss, and Eric Voegelin have made methods essential to their approach to political philosophy, Leopold and Stears point out that most political theorists and philosophers lack any significant training in political theory methodology when they were graduate students. Political Theory is to remedy this situation by providing a variety of methods and approaches to political theory in ten chapters written by different authors.

David Leopold examines the Marxist tradition of political theory where he describes “extravagant” (e.g., Georg Lukács) and “modest” (e.g., Analytical Marxists) accounts of the dialectic. Although valuable, the dialectic is not a methodological alternative to the analytical approaches for Leopold, especially as it can be translated into more analytical language. The gulf between “dialectical” and “analytical” reasoning therefore is a false one.

Mark Philips brings history into the conversation with political theory, asking whether political theorists have distinctive reasons for being interested in history. Political theorists can draw upon history for insights and evidence and trace how it has been shaped by the past. However, political theorists should defend their own methods and approaches in the study of history when confronted by historians, whose relativism makes it difficult to address subjects like the character of political rule and political action.

By contrast, Sudhir Hazareesingh and Karma Nabulsi insist upon the centrality of historical methods and approaches for political theory to be successful. If a political tradition is to be understood as a distinct and stable body of thought, then a historical examination of those sources is required. Hazreesingh and Nabulsi want to include pamphlets, debates, song, ritual, and other non-classical texts to be included as sources in tracing a particular political tradition. Without a proper historical understanding, political theory’s account of a tradition is incomplete.

In chapter nine, Elizabeth Frazer distinguishes politics as “means” and “ends” with Machiavelli, Weber, Plato, Aristotle, Arendt, and others occupying one place or the other. With these authors a multitude of questions arise about the nature of politics and its boundaries in its relationship to society and other areas of life. By showing how politics is used in a variety of ways with an array of different meanings, Frazer conveys the vast scale and great complexity that politics is and the difficult task that political theory has to make sense of it all.

Michael Freeden writes the final chapter of the book with a look at “actual political thinking”: the language and structure of ordinary manifestations of political thought. Freeden makes a distinction between thinking in politics (e.g., ranking priorities, justifying power) and thinking about politics (how ideology shapes our thinking about politics). Because both political thought and language continually changes, there is no finality to these topics. Political theorists therefore need to develop methods to deal with the indeterminacy and vagueness of language and reach out to other disciplines, like hermeneutics, to complete its work.

Admittedly a bit dated, Political Theory: Methods and Approaches still holds up well and should be required reading – along with Strauss, Skinner, and Voegelin – for every political science graduate student. It is not enough to master the comprehensive reading list in political theory or to know the secondary literature. To be able to practice political theory requires reflection and introspection upon one’s own assumptions, methods, and approaches. Political Theory: Methods and Approaches is a prompt for political theorists to do so.