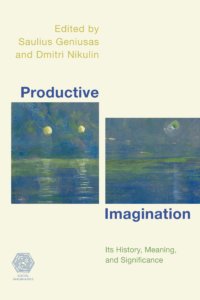 How do we imagine ourselves and to what extent do we use our imagination in our conception of our social selves and social worlds?  These questions are the focus of Saulius Geniusas’ and Dmitri Nikulin’s edited collection, Productive Imagination. The book explores the productive imagination’s capacity to form social worlds and the configurations of them. With eight chapters and an introduction, Productive Imagination establishes the conceptual history of the productive imagination by bringing together different philosophical perspectives that ranges from antiquity to today

Dmitri Nikulin begins the volume with Aristotle’s account of imagination and how it is interpreted by Wolff, Baumgarten, Kant, and other early modern thinkers. These thinkers come up with a set of insights that constitutes our modern understanding of the productive imagination: it meditates between the faculties of sensation and thinking yet is autonomous and independent of these two. It also belongs to the faculty of memory because it produces and preserves images, something which is forgotten by later modern philosophers.

In the second chapter, Alfredo Ferrarin looks at Kant’s concept of productive imagination as an a priori determination of pure intuition rather than being residues of past experiences. Imagination can be understood both theoretically (e.g., being distinct from concepts like exhibition and creation) and practically (e.g., affective, social, and symbolic). Productive imaginative therefore exercises causality in our shared world, creating – to use Wollheim’s term – a “theater of the mind” that connects personal identity to a collective narrative.

The next set of thinkers examined are Hegel and Kant by Angelica Nuzzo in chapter four. Nuzzo argues that Hegel appropriates Kant’s concept of the productive imagination as the transcendent mental faculty that meditates between sensibility and understanding. In Hegel’s philosophy, productive imagination is fully assimilated into reason as one of the consecutive stages in the development of a dialectical, progressive, immanent self-transformation of human consciousness. In other words, Hegel believes that the absolute idea as the absolute unity of the pure concept and its reality necessarily includes the productive imagination of Kant’s concept of genius.

Moving from the experiences of the natural world to the experiences of the human, social, and historical world is the subject of chapter five. Rudolf Makkreel shows how Wilhelm Dilthey’s theory of imagination brings to focus phenomena in a pre-given or contextualized world. Productive imagination articulates and furnishes meaning rather than finding connectedness in the world. Thus, the hermeneutic task of the philosopher is to orient us contextually in the human, social, and historical world and fill in the gaps in the remaining data to present us the whole of reality.

In the final chapter, George Taylor argues the concept of figuration is key to understand Ricoeur’s philosophy of productive imagination. Figuration describes the linguistic structure of human action, speaks to the connotative side of language, and depicts language pictorially. Figuration therefore is the common foundation between language and experience, bridging impression (experience) and concepts (thought).

Productive Imagination is a welcome work that explores the conceptual history of the productive imagination in the West from antiquity to today. By presenting different conceptual frameworks and histories, the book establishes a foundation for future analyses of the productive imagination. While a conclusion would have been useful to tie these chapters together, Productive Imagination makes a significant contribution to the philosophy by starting the conversation about this topic. It prompts one to imagine more about this subject and speculate about subsequent studies in the future.

What Numbers Can and Cannot Tell Us about Russian Politics

A Bone of Him Shall Not Be Broken

Commentaries on the Work of Eric Voegelin

Amusing Ourselves to Death: Public Discourse in the Age of Show Business