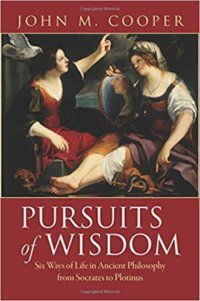 Pursuits of Wisdom examines six widely diverging individual ethical philosophies in the continuous tradition from Socrates to Plotinus. Each philosophy is a study of what constitutes a good or bad moral character as articulated by Socrates, Aristotle, the Stoics, the Epicureans, the Skeptics, and the Platonists. Philosophy for these thinkers was seen as a way of life guided by a completely integrated single body of knowledge. Following in the footsteps of Pierre Hadot, who argued that philosophy was a transformation in the way one lived, Cooper’s book shows how these six philosophies were understood, practiced, and lived in the ancient world.

For Cooper, to live philosophically is to live according to a set of ideas that have been rationally worked out, understood, and defended. This is different than to live a religious or civic life: the philosophical life is where reason has been purified by philosophical inquiry. To be a philosopher in the ancient tradition is to be committed to the use of one’s own capacity to reason, whether it be Socratically, skeptically, or otherwise. This understanding of philosophy was only possible with the conception of the individual self-consciousness, the self or “I,” that Hadot described as a “psychological phenomenon.” The “I” became the object of fundamental concern with the belief that reason would provide a path of how one should live – the promise that the philosophical life is one that would achieve the best human life possible.

The first philosophy studied is the Socratic way of life as expressed in Plato’s Apology. Socrates thinks that every action is done with and from the thought that it is the best thing for a person to be doing at that moment. This is because human beings are rational animals and act only on reasons that they accept to justify the action. Knowledge therefore is valuable because it gives a person a basis for evaluating situation and circumstances and how to act accordingly. It is the goal of the philosopher to seek this knowledge in wisdom, “the good condition of the human soul, in which the soul performs to perfection its function in giving rise to all the actions of which a human life consists” (38-39).

However, Socrates lacks wisdom, a condition that he would never be able to overcome. What became as a devoted but temporary pursuit eventually became a permanent condition in the dialectical exchange with himself and his interlocutors. Thus, the Socratic way of life is the practice of philosophical discussion with oneself and others in the pursuit of wisdom and justice. This open-ended endeavor of Socrates distinguishes his philosophy from all of his successors in the tradition of ancient philosophy.

For Aristotle, philosophy was more complex and different than for Socrates because of the range of topics he covered (e.g., metaphysics, biology, rhetoric) and because he discussed the practical rather than theoretical nature of ethics and politics. Like Socrates, Aristotle believes virtue is the highest end for human beings but he is not clear which activity constitutes this end (i.e., theoretical or practical virtue). For Cooper, this leads to Aristotle devising two accounts of happiness – theoretical and practical virtue – that complicates his way of life. There are two modes of living, the contemplative and the practical virtuous, which sets Aristotle off from Socrates who believes that they are one and the same. For Aristotle, a person must choose which life he or she wants to live in order to be happy.

The next philosophy discussed is Stoicism which focuses on happiness as the single goal of life with people fulfilling their duties for duty’s sake. Furthermore, Stoic ethical theory integrates its ethics with a metaphysical account of a single creator god, inherent in the world of nature, who is the source of moral duties. Thus, a person is live in agreement with nature to be happy: to follow the natural inclinations of sociability, creating a family, and to be indifferent to everything else that is not virtuous.

In this respect the Stoics differs from Socrates and Aristotle who view external goods as necessary for happiness while the Stoics see them as valuable (blessed) but not related to happiness itself. The presence of valuable things neither enhances nor distracts from the pursuit of virtue. To be a Stoic therefore is to know the fundamental metaphysics of reality in order to be in agreement with nature and thereby virtuous or happy.

The Epicureans and Skeptics rejected the Stoics’ account that human reason has a divine affiliation: it is just another animal passion that humans possess. For the Epicurus, pleasure is the highest good: a person is to be aware of his or her pleasure and perceives its goodness. To accomplish his, Epicurus calls for the emptying of certain desires that are self-defeating or addictive and instead to desire things without the intensity that makes them all-consuming. Because pleasure is the highest good, virtue consequently is only a secondary good (if compatible with pleasure). Thus, the traditional virtues of courage, moderation, wisdom, and justice are to be practiced not because they are inherently good but rather because they promote a state of mind where a person is aware and perceives the goodness of his or her pleasure.

Skepticism is the philosophy to make one accept that the inevitable disruptions in life with serene acceptance and tranquility. The doubts about knowledge – what is good or bad for humans – are only means to achieve this end. This state of mind, to be serene and tranquil, is achieved through a philosophy which adheres that life is full only of appearances. Yet, even though a person lives in a world of appearances, the skeptic retains a certain allegiance to the authority of reason in philosophy to guide him or her on the path towards tranquility.

The final school of thought, Neoplatonism, is a philosophy of pure intellectual thinking where the life of one’s friends, family, and the world of the senses is not important. For Neoplatonists, like Plotinus, reality fundamentally consists of Platonic forms or souls that are separate from reality to which a person’s own soul belongs. Philosophy is seen as the thinking and understanding of these forms where a philosopher undergoes a series of struggles (civic, purification, and intellectual) to achieve self-salvation.

In spite of their diverse and contradictory views, these six philosophies share the belief that human reason, the power to inquiry and recognize truth, is the motivation for action. By adopting this assumption, these philosophers are able to make their own philosophies of how one should live. This account of philosophy radically differs from its modern counterpart such that modern philosophy is not concerned about how one lives. This neglect of reason, truth, and how to live by modern philosophers has turned the discipline into a sterile exercise of language games and logic drills. Perhaps it is no wonder why philosophy is no longer seen as relevant as it once was in higher education.

Pursuits of Wisdom is a magnificent retelling of ancient philosophy, addressing the question how one should live and informing us the schools of thought that existed in antiquity. It is accessible and academic, accentuating the contrast between its account and most contemporary philosophical works today. Providing a detailed analysis of the major schools of ancient ethics, Pursuits of Wisdom is an indispensable book for all those interested in philosophy and wondering how you should live.

Mad Men: The Death and Redemption of American Democracy

The Medieval Craft of Memory: An Anthology of Texts and Pictures