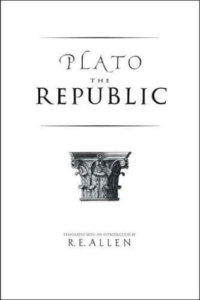 As with his other works on Plato’s dialogues, R. E. Allen’s translation of the Republic is a faithful, smooth-flowing, and intelligent rendition of the material for students and the general reader. For scholars, it is another major translation of Plato’s dialogue in the tradition of Cornford, Grube, Waterfield, Bloom, Reeve, Griffin, and others. Although Allen admits his admiration for Cornford’s translation, he has corrected its deficiency by being more faithful and literal to the Greek than what is found in Cornford’s work. Based on the 1903 Burnet text, Allen organizes the Republic into its traditional ten books, with the addition of the Stephanus notes and helpful subheadings. The translation also contains a judicious use of footnotes to clarify aspects of the dialogue as well as a suitable index to assist the reader in finding particular subjects.

Although the Republic raises questions about an array of topics ranging from metaphysics and epistemology to aesthetics and pedagogy, Allen in his introduction focuses on the political and psychological parts of the dialogue. Starting with an analysis of Thrasymachu’s argument that justice is the interest of the strong, Allen contends that the Republic is primary about political, specifically factional, conflict and its resolution. Socrates’ solution of a guardian class, who identifies their good with the good of the city, is the foundation of virtuous and wise government. The bonds of family and civic friendship, along with a proper education that culminate into a contemplation of the Good, result into a regime run by the wisdom of the philosopher-king.

Allen’s contrasts Socrates’ solution to the problem of political faction with Madison’s, who argued in The Federalist Papers that factions should not only be tolerated but encouraged to multiply in order to cancel each other out, thereby promoting conditions where self-interest and exchange that are based on private property become the foundations for political stability. For Madison, Socrates’ arrangements in the Republic are bound to fail because the latent cause of factions is sown in the nature of human beings and cannot be overcome by any amount of pedagogy or civic loyalty. Whereas Socrates’ solution to political faction is based on unity, Madison’s remedy is in its multiplication. Although Allen is more inclined towards Socrates’ than Madison’ proposal, he does illuminate how certain themes in the Republic have influenced the founding of the American regime and its own development of constitutional law. In fact, he translates politeia not into ‘regime,’ as in the Bloom’s translation, but into “constitution,” as befits his own understanding of the political concerns in the Republic.

The second aspect of the Republic that Allen investigates is the moral psychology of the just individual: why should a person prefer to be just rather than unjust? Retracing Socrates’ steps in dismantling Thrasymachus’ argument, Allen points out that, in spite of Socrates’ successful refutation, Socrates himself is unable to defend the just life over the unjust one. This Socratic paradox – it is always in one’s interest to act justly, even if it requires suffering injustice rather than committing it – is for Allen one of the main moral themes in the Republic. It also perhaps explains the ambiguous use of the word justice throughout the dialogue, where it initially describes human conduct in keeping promises and telling the truth and concludes in its account as the ordering principal of the soul for individual health and happiness (IV 443d-3). The just person performs just actions and refrains from unjust ones because he is wise and aims at the health of his own soul. Justice in this sense becomes civic (VI 500) and political (IV 430c) but ultimately is secondary in its function to the formation of the individual’s character.

If justice is a condition of the soul, then a person may profit from his own just actions – contrary to Thrasymachus’ claim. This conception of justice also allows Allen to counter criticisms of Socrates’ view of justice from deontologists and utilitarians. Deontologists criticize Socrates’ claim that morality is justified by its profitableness while utilitarians disparage the notion that justice is good for its own sake. The common mistake for both schools of thought is their inability to conceive of justice as a condition of the soul instead of human conduct (or as a consequence of human conduct). According to Allen, justice has no ends beyond itself, as deontologists or utilitarians claim: justice is neither prior to some end nor instrumental to it; rather, justice is an end in itself and one of many ends for the goodness of the human soul. Socrates’ conception of goodness is not univocal as utilitarians would have us believe; rather, it is multi-textured and complexly constructed that defies utilitarian quantification.

If justice is the condition of the soul, then the distinction between happiness and pleasure is required, with the former rooted in the stability of the Forms and the latter residing in the human realm of contingency. Whereas pleasure is fleeting in its enjoyment, justice is stable because it is a Form. Thus the theory of the Forms, as discussed in the central books of the Republic, becomes the foundation of Socrates’ moral psychology and philosophy. But what is frustrating in the Republic is that Socrates never answers Glacuon’s question of what constitutes justice; nor for that matter, does Socrates discuss how justice is related to the Forms and the Idea of the Good. For if to understand justice is to understand goodness, and if goodness is the ontological foundation for all of reality, then the search for justice is the search for the fundamental principles of all knowledge. Although Socrates remains silence on these questions, Allen suggests that goodness may the first principle to elicit human eros in our search for knowledge, with the most important one being our search for justice.

In spite of Socrates’ refusal to define justice, he does provide a working hypothesis: it is related to goodness and it is profitable. The connection between goodness and justice exists but it remains unclear. The ambiguity of this relationship prompts the interlocutors as well as the reader to recall their own experiences with justice and goodness – to access the latent or implicit knowledge within us in our search for justice. This exercise of recollection is not only portrayed in the myth of Er, but it is also an evident theme in Allen’s own translation. The absence of quotation marks that are used to distinguish between the contributions of different interlocutors reminds the reader that the Republic is a single recollection of Socrates to some nameless listener of a conversation he had the previous night. Thus dialogue itself is nothing more than a single tale of remembrance, suggesting to the reader a model for his own search for justice and its relationship to goodness.

Allen refrains from discussing the role of irony in the dialogue – a device that Straussians attach particularly importance in their interpretation of Platonic dialogues. Whereas Leo Strauss and his students like Allan Bloom believe that Plato wrote esoterically for an philosophical elite who could decipher the true meaning of the dialogue, Allen, like Aristotle in the second book of the Politics, clings to the surface of the text, believing that Socrates is serious about his proposal of the just city as a solution to the problem of political faction (II-V). Instead of irony, Allen argues that the Socratic paradox – it is always in one’s interest to act justly, even if requires suffering injustice rather than committing it – is one of the guiding themes in the Republic and accounts for an ambiguity in defining justice and defending the just life. Whether this interpretation is a superior one to the Straussian’s is a debate beyond the scope of the review here, but Allen’s account is clearly a viable alternative that requires serious consideration.

Allen’s translation of the Republic is one that stays at the surface of the text in an easy, contemporary idiom that successfully compromises between a literal rendition and philosophical speculation. It avoids the awkwardness that literal translations yield; and it remains faithful to the Greek where Allen’s own philosophical positions minimally intrude in the translation itself. The introduction smartly concentrates on the themes of political faction and moral psychology rather than discuss the array of topics that the dialogue invites. For classicalists, the new translation is a delight that will be useful in the classroom; and for political philosophers who have reservations about the Straussian interpretation, Allen’s translation provides another avenue to explore Socrates’ examination of justice and its way of life.

Examining the Role of Naturalism in Science

The Performative Contradictions of Liberalism