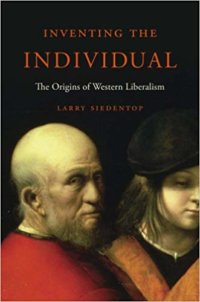 Liberalism is rightly considered to be an ideology based primarily on individual freedom.  Hobbes and Locke, as philosophical proponents of natural rights, were among the first to argue that government exists primarily for the protection of individual rights. The fear of violent death compels man to seek refuge in civil society, where a common authority is given the requisite power to protect natural right(s). Hobbes and Locke both rejected the divine right of kings and provided a secular basis for government. Many view liberalism as a reaction against religious conformity and ascribed status, assuming that its principles arise from the individual’s desire to control his own destiny. Larry Siedentop offers a compelling alternative to this narrative, arguing that the emergence of the individual ultimately comes from a distinctly Christian understanding of the world. Far from being a rejection of its principles, modern liberalism is, in some regards, a logical continuation of Christianity.

Siedentop begins in the ancient world and more specifically in Rome.  He points to the hierarchical nature of the society, with “radically unequal social identities” and an emphasis on the paterfamilias.[1] The religious and political were closely intertwined and the family was given primacy. The father served as a “high priest tending the family altar and its sacred flame, the flame that made his ancestors visible.”[2] The family structure was marked by a radical inequality with the father assuming dictatorial power. There was no sense of individuality, the roles within the family were given by birth. The emergence of the city-state modified this arrangement as a multitude of family cults were joined together. As Siedentop notes, it was little wonder then that the formation of a city required the emergence of a new cult or worship, through discovery of a ‘hero’ as founder of the city. The city, much like the family and tribe, had its “protecting deities.”[3]

The religious aspect of the ancient world is an important component to Siedentop’s narrative. He points to the often cited, yet misguided, view of the Renaissance as a return to principles of the ancient world, especially its secularism: “Instead of an antiquity free of religion, priesthood and superstition-a secular inspiration for modern Europe-we find on closer examination that the family, tribe and city were each a kind of church.”[4] Echoing Machiavelli’s criticisms of his contemporaries in Discourses on Livy, Siedentop points out that much of the influence from the ancient world fits into cultural dimensions such as music, art, and architecture rather than politics. The foundational principles of the ancient world (a purposeful nature, inequality, rigid social roles) were generally not embraced during the Renaissance.  Unwittingly the secularism embraced by modern liberalism is actually “Christianity’s gift.”[5]

Christianity ushered in a radically different worldview. Universal in scope and yet focused on the individual, it gave man a new understanding of his place in the world. The first step in this transformation involved the notion of moral equality. Within the framework of Christianity, every person, regardless of social status, is created Imago Dei and must live under the judgment of God. Siedentop credits Paul, more so than any other figure, for outlining the far- reaching implications of this new worldview:

“Paul’s message is directed not merely to Jews but to all humanity. It is an invitation to seek a deeper self, an inner union with God.  It offers to give reason itself a new depth. Rationality loses its aristocratic connotations. It is associated not with state and pride but with a humility which liberates.”[6]

One implication of this view is that the “identity of individuals is no longer exhausted by the social roles they happen to occupy.” A new freedom,  freedom of conscience, emerges as a result, but comes with new “moral obligations that follow from recognizing all humans are children of God.”[7]

It would take well over a millennium for the notion of moral equality to translate to political equality, and Siedentop does an admirable job of outlining major advances (and setbacks) along the way. Within the first several centuries after Christ, the roles of women began to expand considerably: “they became patronesses, disciples and travelers” and some enjoyed access (albeit limited) to education.[8] In the ancient family, husbands essentially had absolute power over their wives and children (including life and death), but the equality of souls under Christ meant that husbands were obligated to treat their wives as equals, at least in the spiritual sense. A practical example of this can be found in the extension of the condemnation of adultery to husbands.[9] The bonds of marriage within Christianity suggested equal moral and spiritual obligations for both husband and wife.

The church was the beneficiary of the shift away from the power of the paterfamilias.  The local bishops came to serve as “de facto rulers of the cities” in the transition from the Western empire (5th-6th centuries) to the medieval city.[10] This is not to say secular leaders did not still wield significant power.  The period between 1050 and 1300 proved pivotal as the German empire and papacy fought over claims to jurisdiction. “It obliged both the papacy and secular rulers to reconsider fundamental questions about their identity and claims… In the long run it contributed to the emergency of constitutionalism in Europe. It (also) generated the idea of the state endowed with a ‘sovereign’ authority.”[11] Clarity was needed about the proper bounds of authority and the somewhat haphazard combination of “customary practices, legislative enactments, and moral principles” proved inadequate.

Siedentop argues medieval canon law helped solve the problem and laid the foundation for modern political theory. Both contain “an insistence on equality of status, moved on to the assertion of a range of basic human rights, and concluded with the case for self-government.”[12] Concurrently, the church successfully established itself as a sovereign power, providing a model to secular kings. In clearly defining its own role as the authority over spiritual matters, the church helped define the secular realm as primarily a guarantor of property rights and protector of the peace.[13] The implicit separation between the spiritual and secular became explicit during this time. The creation of a legal system for the Church, with a centralized administration and hierarchical system of courts provided a model that kings were happy to emulate, ultimately leading to the creation of the nation-state.

Siedentop spends considerable time on the fourteenth-century, arguing it served as a precursor to foundational principles of modernity such as claims of conscience, civil liberty, and the importance of government by consent.[14] More importantly to his argument about liberalism, a theory of human freedom, based on divine freedom, was clearly delineated. He points to the disagreement between the Franciscans and Dominicans, based on doctrines developed by William of Ockham and Aquinas. The Franciscans criticized the hierarchical nature of the views proffered by Aquinas, claiming they were too close to Aristotle and ancient rationalism.  At stake was nothing less than God’s freedom, and by extension, human freedom. Was God’s freedom or God’s rationality to be the point of emphasis? Ockham and the Franciscans went with the former, choosing contingency over necessity. The claims of will in human agency were mirrored in divine agency.[15] Ockham’s nominalism also helped de-divinize the natural world by removing the Aristotelian notion of final causes. Ockham’s Razor, prioritizing economy in explanatory power, pointed to material and efficient causes. This helped pave the way for the development of natural science and dealt a mortal blow to natural theology.

In the epilogue, Siedentop outlines the political and philosophical implications of his argument.  Drawing on his previous work, he argues Europe has been experiencing a “civil war” that threatens to spread to the United States: “It is a war in which religious belief and ‘godless’ secularism are understood as irreconcilable opponents.”[16] The problem has become acute in Europe due to “massive immigration and the growth of large Muslim minorities” since these have “widened the range of non-Christian beliefs dramatically.”  Islam, in large part, seems to “sit uneasily with secularism.”[17] While Muslims confidently assert their religious roots, Europe continues to look back to ancient Greece and Rome, ignoring the central role of the church in the formation of their culture.[18] As Siedentop explains:

“It is tragic because, by identifying secularism with non-belief, with indifference and materialism, it deprives Europe of moral authority, playing into the hands of those who are only too anxious to portray Europe as decadent and without conviction. It is unnecessary because it rests on a misunderstanding of the nature of secularism. Properly understood, secularism can be seen as Europe’s noblest achievement, the achievement which should be its primary contribution to the creation of a world order, while different religious beliefs continue to contend for followers.”[19]

Secularism rests on a belief in moral equality, which “implies that there is sphere in which each should be free to make his or her own decisions, a sphere of conscience and free action.”[20]  Although the United States has not yet suffered from this so called civil war to the same degree Europe has, Siedentop sees a troubling development. The growth of what he calls Christian fundamentalism threatens “the traditional American understanding of secularism as the embodiment of Christian moral intuitions.”[21] Siedentop does not mention another important development here:  there has been a significant decline in church attendance and religious affiliation in the United States over the last several decades. Might that traditional understanding linking our institutions with Christianity decay in a way similar to Europe?

Overall, Siedentop offers an ambitious and sprawling account of the development of liberalism.  Given the enormous scope of the work (essentially covering two millennia), there are limitations to the depth of the argument at times, and some important events and thinkers are  left out of the account. However, the crux of his argument is compelling and given the ideological battles of the last century and emerging threats such as radical Islamism, liberalism needs to be able to offer a compelling account of itself. What gives the natural rights we hold so dearly their moral weight? Are we simply “matter in motion” or does each of us bear the imprint of our Creator?  Do we still really believe in moral equality or are we simply going through the motions? With freedom in the world declining, can liberalism re-assert itself? Each generation must ultimately reaffirm liberty, and a coherent defense (and/or expansion) of liberalism must start with an adequate understanding of its foundation.  To that end, Siedentop has provided us with a good starting point.

David Whitney is Associate Editor of VoegelinView and Associate Professor of Political Science at Nicholls State University in Louisiana. He is author of Maladies of Modernity: Scientism and the Deformation of Political Order (St. Augustine's, 2019).

One Another’s Equals: The Basis of Human Equality

What Is Enlightenment? Continuity or Rupture in the Wake of the Arab Uprisings