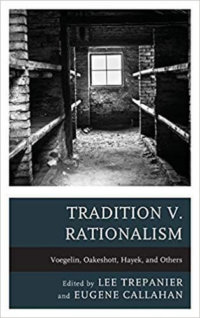 We live in strange times. Anyone following educational trends will have noticed that the culture wars are filtering into even the hard sciences. To the wider world this might be perplexing but to readers of this website none of this is surprising. Science and culture have always been intimately connected. Even if we have been told over and over again to distinguish facts from values we know that we can never really do so. How we live affects how we see the world and vice versa. We cannot separate science and culture and we certainly cannot redesign culture with the scientific method. Why we still try to do so and why we can never succeed (and would never want to) is the subject of Tradition V. Rationalism: Voegelin, Oakeshott, Hayek, and Others.

Just what is rationalism? The editors admit that “rationalism” is an overloaded term but a provisional definition would be to seek the answers to every question in life by way of the scientific method. “Scientism” is another term for this phenomenon (although with a slightly more narrow focus). If something cannot be measured and evaluated scientifically then it should have no bearing on our lives. Likewise, anything that arose without a rational plan behind it is subject to demolition and renovation until it can justify itself on scientific terms. Ultimately this demolition and renovation project includes science itself. In fact, it was the destruction of science by scientism in the Soviet Union (including a temporary end to genetics studies due to its conflict with Marxism)[1] which launched Michael Polanyi into his quest for an adequate defense of science proper. Ultimately Polanyi’s quest led him to a revolutionary epistemology which rested on the tacit knowledge passed down to us via tradition and a way of life.

Polanyi is just one of thinkers covered in Tradition V. Rationalism. The book gathers together in one place essays on some of the great critics of the rationalist tide which has swept (and occasionally submerged) Western civilization. The other thinkers examined in this volume include Eric Voegelin, Michael Oakeshott, F.A. Hayek, Ludwig Wittgenstein, Alasdair MacIntyre, Gilbert Ryle, Hans-Georg Gadamer, Aurel Kolnai, and (ever so briefly) Leo Strauss. It is an impressive collection and most of these men deserve to be studied much more widely than they are presently. In fact, I am embarrassed to admit that I had never even heard of Aurel Kolnai until I began reading Tradition V. Rationalism. I hope therefore that this book helps to spark further interest in the scholarship of each of these men.

Each of the essays in this volume is a serious foray into the thought of a complex thinker. I particularly enjoyed Daniel John Sportiello’s chapter on rationalism in Voegelin. Voegelin had many virtues and was very learned but  Voegelin was not always the clearest writer. Sportiello by contrast is clear.  Sportiello notes that it “is not obvious that Thomas Hobbes, Jeremy Bentham, and other modern political philosophers were wrong in their rejection of a transcendent order” (56). A mystical and spiritual experience is required to make truth and justice visible and we cannot think ourselves past that. Of course it is an open debate about just what that experience is and whether Voegelin was right about it. The editors note in their introduction that Voegelin’s critique was “not exactly Christian” but that is a debate we can leave for another day.

Another chapter that stood out to me was Mark T. Mitchell’s on the indefensibleness of faith for Voegelin and Polanyi. Amidst some other ideas (including Voegelin’s account of Gnosticism) Mitchell succinctly explains Polanyi’s concept of “moral inversion” whereby moral passions become unmoored in the very moment their existence is denied. In the extreme, conscience can no longer apply any breaks to behavior when consciousness is described as an illusion and behavior is “scientifically” demonstrated to be entirely predetermined my material forces. Thus whatever happens (bloodshed, atrocities, etc.) is just what had to happen because that is what science said would happen. We witness this phenomenon in a milder form whenever we hear someone say, “this is not an ethical question, it is scientific one.”

As a whole I came away quite impressed with just how thorough Tradition V. Rationalism is in its comparative brevity. For example, Gene Callahan’s essay “Hayek and Oakeshott on Rationalism” references Hayek’s The Sensory Order and Oakeshott’s Experience and its Modes. Both works are some of the more technical and neglected of each author. It was encouraging to see these works taken seriously even if they are not the ones normally examined in conversations on politics involving Hayek and Oakeshott.

My (light) criticism of the work is not its portrayal of each thinker. Based on the thinkers I am most familiar with, the authors of the essays in this volume have done an admirable job in concisely explaining how each thinker grappled with rationalism as well as how they differed from one another. If anything, I wish the book had two more chapters. I would have liked to see one directly comparing Oakeshott and Voegelin[2] and another comparing Oakeshott and Polanyi. In fairness though, John von Heyking’s chapter “Was Hayek a Rationalist?” and Kenneth B. McIntyre’s “The Critique of Rationalism: Ryle and Oakeshott on Tacit Knowledge” draw the kinds of comparisons needed to round out the volume. Perhaps a good supplement would be Mark T. Mitchell’s essay “Michael Polanyi and Michael Oakeshott: Common Ground, Uncommon Foundations” published in volume 28 of Tradition and Discovery.  Still, this is a very thorough work.

On a more serious note, there is also one other thinker lurking in the background who could have been included as a jousting partner for the rest in this volume. After all, a few of his more notable students make an appearance (Gadamer, Strauss, and Arendt are all referenced). Martin Heidegger was also a critic of rationalism. It is understandable of course why Heidegger was not included. First, most of the thinkers covered in Tradition V. Rationalism are under appreciated while Heidegger still enjoys prominence. Again, in this regard I must highlight my own ignorance Kolnai’s work. The second and more likely reason that Heidegger was not included is because he openly sided with evil in the form of the Nazis. A book about the disastrous overreach of rationalism to the detriment of morality and politics is hardly disposed to include Heidegger among a cadre of otherwise noble souls.

“We arrive here at a process of education that, as such, is akin to the acceptance of our calling and which, indeed, forms a part of it. For our cultural background is determined to a considerable extent by a limited number of men. Primitive cultures are transmitted orally by a few authoritative persons in each succeeding generation. Our modern, highly articulate culture flows largely from a small set of men whose works and deeds are revered and consulted for guidance. The knowing of these great men is an indwelling in the sense already defined. Our awareness of their works and deeds serves us (to repeat my definition) as a framework for unfolding our understanding in accordance with the indications and standards imposed by that framework.”[3]

Now let’s look briefly at a pair of passages from the aforementioned section in Being and Time. Each is loaded with terminology (that I will not take the time to explain) but they should give a good sense of why I am asking for a critical comparison between Heidegger and the thinkers covered in this volume:

“Destiny is not something that puts itself together out of individual fates, any more than Being-with-one-another can be conceived as the occurring together of several Subjects. Our fates have already been guided in advance, in our Being with one another in the same world and in our resoluteness for definite possibilities. Only in communicating and in struggling does the power of destiny become free. Dasein’s fateful destiny in and with its ‘generation’ goes to make up the full authentic historicizing of Dasein.” [4]

And on the next page:

“The resoluteness which comes back to itself and hands itself down, then becomes a repetition of a possibility of existence that has come down to us. Repeating is handing down explicitly—that is to say, going back into the possibilities of the Dasein that has-been-there. The authentic repetition of a possibility of existence that has been—the possibility that Dasein may choose its hero—is grounded existentially in anticipatory resoluteness; for it is in resoluteness that one first chooses the choice which makes one free for the struggle of loyally following in the footsteps of that which can be repeated.”[5]

In Heidegger, just as in Polanyi, the possibilities available to us come from tradition and the examples set by great men. Neither thinker turns to a rationalist program for unearthing the meaning of life. Of course when Heidegger wrote those passages his hero was Husserl (a man also admired by Kolnai according to the present volume), but we all know Heidegger followed another into darkness soon after Being and Time was published. My hope is that one author in the present volume takes up my challenge to engage Heidegger on the same theme of tradition and rationalism.

Suffice to say that Tradition V. Rationalism is a book that leaves one wanting more in the best possible way. That in and of itself is a tribute to the men examined in its pages who in various ways sought to stir a humble openness in us. Each struggled to show us our incomplete understanding of our own meaning and the futility of scientism to explain it.  We only get the complete answer to the meaning of our lives in paradise, and paradise (which did not exist for Oakeshott and probably Hayek) is something we cannot make and should never try to. I strongly recommend Tradition V. Rationalism to anyone looking for a serious guide to the scientism still prevalent among us. In short this is an excellent book.

[2] In addition to Timothy Fuller’s Chapter on how each responded to Hobbes.

An excerpt of the introduction is available here.

Thomas Cloud is pursuing his Ph.D. in Political Science at Louisiana State University with an emphasis in Political Theory. He has a Masters in Politics from Hillsdale College and a B.A. in Econmics and History from The University of Washington.