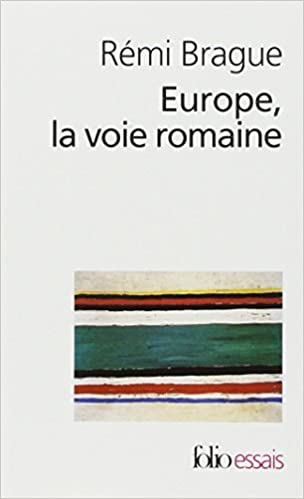 Reason defines men, not the other way around. Had such an Aristotelian-like proposal constituted the philosophical upshot of Rémi Brague’s masterly apology of Europeanism, he could have been on the road to saving Europe from the false dichotomy he buries it in, namely the one between fascist particularism and equally fascist universalism (180-90).

Brague would seem to agree with Aristotle that we are fundamentally defined by desire for truth, as opposed to cultural possession of truth (205). Yet, Brague’s truth is not natural, but historically mediated, as with Hegel. The quest for truth would not be—to overturn a Straussian adagio—a matter of “return,” but of progress. No unconditional “return” could help us, today, not even the philosophical one supposedly dreamed of nostalgically by Leo Strauss (132, 149).

There is something ominous, even radically evil, for Brague, about the attempt to return to a past that is our own: we have no lost identity to return to, but a quest for identity that is legitimate only insofar as the identity we seek is not conceived as our own, as “proper” and thus as natural. While our past cannot justifiably serve as image of eternity, the past can justifiably serve as fuel for our rising into a universal/open future virtually replacing eternity (Brague’s “time” is not the image, but the “renewal of eternity”—79).

In defending Europeanism, Brague is not appealing to a “content,” or acquired wisdom, but to humility grounded in consciousness of historical indebtedness (184), or of what Roman/Latin Christianity reveals fully: both the emptiness of worldly wisdom and our lasting need for it.

As Europeans, not necessarily Westerners (180), we are cultural mediators (countering the cultural imperialistic assimilation represented by Islam—71, 75, 79), always in a condition of “secondness,” “ourselves” precisely by negating ourselves, thereby serving as cultural models for the entire world (186-88). The crisis of identity characterizing present day “Europeanized” man ensues from his having mistaken himself for his own historical determination. Brague’s prognosis points to a universal path of human creativity anticipated by pagan Rome and confirmed by Christianity.

Brague cites Heidegger to confirm modernity’s indebtedness to Christianity, denying the very possibility of a genuine return to a pre-Christian mentality (211). Contemporary atheism, in particular, is misguided, not merely because it does not recognize its indebtedness to its formal Christian nemesis (more specifically, it fails to recognize that its condition of possibility is God’s silence upon having given himself fully, as Verbum—212); our libertine atheists are misguided above all in their belief that they can overcome all religion, or the sacred, as such. What they can reject in the name of the privatization of religion (stepson of Christianity’s ultimate “concentration” of the divine) is merely, if only in a self-contradictory manner, a personal religion; what they fail to oppose is the rise of an impersonal religion (including Islam), or the rise of despotic immanentism extended imperialistically over all political borders (212-18). Insofar as there never has been and never shall be a “secular” world, the only pertinent question, here, is which religion might be better than others—and why.

Against the archetypically hubristic quest to return to what is “our own,” stands above all the consummation and divine counterpart of antiquity’s “Roman” way of life (liberating original sources from their materiality, or reinterpreting them in strictly spiritual terms): Christianity’s humble renewal of Judaism (supposedly in agreement with Franz Rosenzweig’s Patristic-like brave defense of Christianity’s bond to Judaism—71-79) signaled most notably by the self-debasement of the Christian God. Yet, Christianity still needs paganism. Both the Christian (especially Roman-Catholic) and ancient Roman poles of humility ground and anticipate the humility represented by our own historical consciousness (208-09).

The “Roman” treasure of Europe, indeed of the world, is supposed to consist in the humble emulative yearning for a past cultural other, even as this other turns out to be a mirage intimating, in the best of cases, the ultimate truth about all culture, culture’s historicity (historically constituted identity). The European as such does not stand for what is his own, but for what is progressively universal (in this respect the United States would be European—50). In inviting present-day Europe to “rebecome Roman,” Brague is calling for the recovery of an old, prototypical aspiration to convert natural barbarism into a future civilization; a pagan aspiration that is 1. redeemed into an infinite historical task (144) by Christianity’s recovery of Judaism (unchanging form of the conversion of nature into spirit) and 2. confirmed by modernity’s scientific study of the past (170-71, 200-01, 231-35).

Brague’s argument entails a decisively anti-Platonic epistemology rejecting the notion of the understanding as a matching of what is apparent to thought, to what is buried at the bottom of the mind. Understanding or “awakening” is for Brague structured historically, entailing liberation from content (particularity) and elevation into a realm of pure form/spirit. Content is retained, but only as fuel to the flourishing of a historical consciousness supposedly best expressed by Christianity: genuine awakening would entail the historically mediated or unfolding encounter (self-negation through a cultural “other”) with form/spirit as consummate content/matter.

Brague’s argument invites us to conclude that today and thanks to Christianity Europeans ought to recognize that their pre-history stands as precious fuel to their creativity, which is to be cherished as the mark of man’s wholesome relation to the divine. Unlike Islam, Latin Christianity and to a good extent Judaism would see divine authority as warrant, even justification of human freedom (thus, whereas the Coran has Adam receive names from Allah, in the Bible God challenges Adam to name all created beings, on his own).

What defines Europeans seems to be the dream of freedom, a dream that Christianity, via its relation to the Hebrew Bible, helps us realize insofar as it helps us awaken to, or incarnate the historical essence of freedom. To speak in Hegelian terms, we are free by spiritualizing our cultural-material pre-conditions, using them as fuel for the rise of a universal society enlightened to its historical destiny (176-77, 189-91).

Brague’s progressivism finds support in his assessment of Judaism and Christianity as positing spirituality over and above the political. A “durable antagonism between the political and the religious” (200—commenting on 1 Samuel 8) replaces a “primitive link” between the divine and the human, such as is found again in Islam (199). Even prior to Christianity, Judaism allows for the independence of civil law from any religious/divine imposition (200-01).

Judaism and Christianity (contra Islam) constitute a solid front against any denial of a necessary hiatus between politics and religion. That hiatus presupposes a pre-political inherence of the divine in the human. Political authority is an earthly necessity the limits of which are determined by a human destiny revealed by the Bible. The Bible is supposed to represent, not a defense of the natural inherence of civil law in man, but the human quest to transcend the human into an otherworldly divinity, if only thanks to the divine’s descent into man: ultimately, the Incarnation justifies modernity, rather than signaling a natural inherence of the divine in politics (208-09), an inherence whence would depend politics’ originally conservative (rather than progressive) character. It is the morality/justice of the quest at hand that the Bible—especially the New Testament (201)—is supposed to teach, beyond the limits of all law, so that “the Absolute will pertain only to moral demands, which shall be the norm for all judicial rules” (202). Civil law, especially as experienced by modern man, finds in otherworldly religion its best, perhaps only defense against a pagan synthesis of politics and divinity (203-04).

The upshot of Brague’s argument seems to be that a moral universal assures us that politics is an evil-ridden necessity that, as human beings incarnating the Roman spirit of Europeanism, we are called to spiritualize or purify (46-54). What Romans represent is, above all, a de-naturalizing of nature, anticipating the modern/Hegelian historicizing of nature. This historicizing entails, in turn, the translation of the materially-given into a product of human spirituality, or creativity (48-49): Rome’s passage from physis to auctoritas anticipates modernity, rather than confirming—as Vico would object—a Socratic insight into the civil nature of man, or into the human world as poetic key to the constitution of the natural world (while making no mention of Vico, or of kindred Renaissance interpreters of Rome, Brague appeals to “very brilliant” Hanna Arendt as preferred interpreter of Rome—45).

Arguing that Christianity points away from despotic religiosity is fair; what is arguably unfair is to identify Christianity’s upshot with a freedom beyond political boundaries, as opposed to a renaissance of classical politics or republicanism in the light of Christianity’s critique of tyranny. The Renaissance is supposed to entail the Christian abstraction of empty universality out of a pagan content the return to which would otherwise prove horrific for us (224-25).

Having coopted the notion of renaissance within the framework of a progressive logic, Brague’s Christianity sees nothing but a logic to recover or return to, though everything to be used in the name of an unprecedented future (217-18). The study of the past is of cardinal importance to our progress (whence the lingering importance of pagan Rome in a Christian and modern context). For, while the past, as nature, is devoid of inherent meaning or mystery, it converges into the emergence of our body—217-22, 235-36. Our body, our very flesh, is good insofar as it serves as sacred vehicle for the redeeming “technical use of nature” (228-37). Brague sets out to defend this project of redemption against its self-destruction, evident in today’s European loss of vision of ends, or crisis of identity (238-40). Today’s Europeans must understand that historical relativism applies only to the pagan content that we are to study and transform, and not to the sacred form of our intervention, a form represented today above all by Christianity (234-35). That “form” or “internal dynamism” (originally revealed in Hebrew garb), the very essence of the European “adventure,” is what Brague’s book is ultimately about (242).

Brague’s appeal to Christianity’s “revealed object” (212-15) deserves our closest critical attention insofar as it can help us appreciate a fundamental alternative underlying the contemporary crisis of civilization. That alternative pertains to the nature, or ontological status of the Sacred. Are we to hold as most sacred what is revealed above nature, or what is hidden in nature?  To speak more precisely in the light of Christianity, does God reveal himself completely so as to disclose a world thriving under the sign of historical consciousness, or so as to confirm the eminent legitimacy of a way of life for which right or justice transcends all power-acquisition—a way of life that is lived by the likes of Socrates and appealed to wholeheartedly by the Hebrew Bible?

Marco Andreacchio was awarded a doctorate from the University of IIllinois for his interpretation of Sino-Japanese philosophical classics in dialogue with Western counterparts and a doctorate from Cambridge University for his work on Dante’s Platonic interpretation of religious authority. Andreacchio has taught at various higher education institutions and published systematically on problems of a political-philosophical nature.