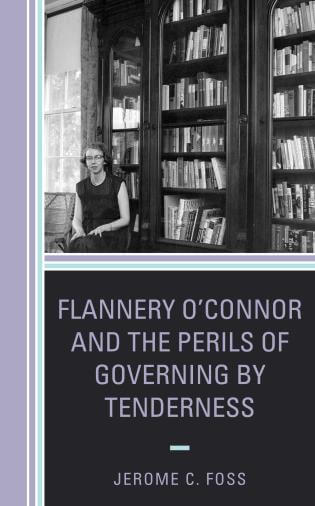 Scholars of politics and literature know how challenging it can be to introduce complex literary works into political science discourses, particularly in the case of writers whose work does not appear at first glance to be bursting with easily identifiable political themes. Flannery O’Connor is just such a writer: one who deserves a place in political science discourses and syllabi, but whose complex and subtle works make the task of persuading colleagues and students to engage with her works something of an uphill climb. It is in this spirit that, in addition to being a fascinating and illuminating read, Jerome C. Foss’ Flannery O’Connor and the Perils of Governing by Tenderness should be greeted as a service to the discipline at large.[1] Seasoned O’Connor scholars and casual readers alike will find treasures aplenty in Foss’ lively and engaging text, and political theorists who have long admired O’Connor but struggled to find a place for her in our research and syllabi will discover seemingly endless fruitful pathways for engagement with her work.

A political theorist whose previous book was a well-received study on Rawls and Constitutionalism, Foss is a careful, sensitive, and comprehensive reader of O’Connor’s work.[2] Flannery O’Connor and the Perils of Governing by Tenderness succeeds in making the case for O’Connor as both a critical commentator on the history of Western political thought as well as a singular voice challenging the assumptions and practices of modern democratic society. Foss casts O’Connor as a trenchant critic of modern political thought and an advocate for the revival of the ancient and medieval modes rejected by thinkers ranging from Machiavelli to Rawls. While interpreting her works to elevate her particular brand of political wisdom and her critical perspective on the history of political thought, Foss wisely avoids the trap of trying to recast O’Connor’s project as one of political philosophy in poetic garb. Instead, he skillfully maintains the integrity of her self-understanding as a Catholic novelist who is deeply concerned with the fate of her democracy and with souls of her fellow citizens. Although Foss does not directly draft O’Connor into contemporary political controversies, he nonetheless positions her as a keen observer of her regime, whose insights are certain to be of interest to serious students of U.S. democracy.

The book is clearly structured in a way that will be of great help to scholars and teachers alike. Readers requiring undeniable evidence that O’Connor herself read and thought deeply about texts in the history of political thought before being taking her work seriously as a contribution to political theory will no doubt be satisfied by the careful archival evidence laid out in the Introduction. Those unconcerned with such groundwork could begin with Chapter One, wherein Foss persuasively establishes O’Connor’s place as a writer on politics “with its more classical meaning to include all those activities that make up the life of a political community” (25). From that point forward, the book appears to have been structured to follow the beats of a survey course in Western political thought, beginning with Plato & Aristotle as exemplars of “The Ancient View of Politics” (Ch. 2), moving on to Augustine & Aquinas to depict “The Medieval Mind” (Ch. 3), followed by chapters featuring Machiavelli & Locke (Ch. 4), Rousseau, Kant, & Hegel (Ch. 5), Nietzsche & Heidegger (Ch. 6), and then ending with a short chapter on Rawls (Ch. 8). The only chapter not structured around putting O’Connor in explicit conversation with canonical thinkers is Chapter 7, in which Foss develops a compelling interpretation of O’Connor’s picture of the perils of governing by tenderness and the possibilities for political philosophy “if the source of tenderness were rediscovered” (160).

To ground his interpretations clearly in the context of political thought, Foss takes as his point of departure a pair of suggestive but frustratingly brief remarks in O’Connor’s essays that are certain to catch the attention of students of political thought. The first, which gives the book its title and dominant theme, comes from an essay O’Connor wrote as an introduction to a biography of a young girl who died tragically young, written by a group of nuns who knew her. In that essay, O’Connor writes:

If other ages felt less, they saw more, even though they saw with the blind, prophetical, unsentimental eye of acceptance, which is to say, of faith. In the absence of this faith now, we govern by tenderness. It is a tenderness which, long since cut off from the person of Christ, is wrapped in theory. When tenderness is detached from the source of tenderness, its logical outcome is terror. It ends in forced-labor camps and in the fumes of the gas chamber.[3]

Foss persuasively unpacks this intriguing remark, demonstrating its significance not only for interpreters of O’Connor’s works, but also for anyone who might find themselves sympathetic to her unique critical perspective on modern politics and political thought. Although he introduces this theme at the outset, it is not until the penultimate chapter (Ch. 7) that Foss fully turns his attention to the titular perils of governing by tenderness, but the way in which that reading is a culmination of his account of O’Connor’s rehabilitation of ancient and medieval political thought, critique of modern political thought, and concern for the health of the American regime makes it more than worth the wait.

The second set of remarks around which Foss structures his analysis come from her essay “Novelist and Believer,” in which she introduces an intriguing description of three different kinds of distinctly modern types:

Foss draws upon this insight—which O’Connor uses to distinguish her own experience as a believing novelist from that of her contemporaries like Steinbeck or Hemingway—as a scaffolding for putting her work in conversation with three sets of modern political thinkers he associates with each of her categories of modern man in the sequence mentioned above: Machiavelli & Locke (Ch. 4), Rousseau, Kant, & Hegel (Ch. 5), and Nietzsche & Heidegger (Ch. 6), respectively. These chapters feature creative interpretations and thoughtful insights, but suffer from the limitations imposed by the need to continuously link the interpretations of O’Connor’s work to both her “modern man” typology and to the philosophers under consideration. At times, the attempt to locate O’Connor’s work among the familiar beats of the history of political thought threatens to crowd out the nuanced and sensitive readings Foss gives to the stories and novels themselves. Thus, we are told that imagery of light and shadow should recall the Allegory of the Cave (46; 63; 146) and that the wicked Mr. Fortune of “A View of the Woods” is Machiavellian (86), both of which are perfectly reasonable insights, but don’t do much to deepen our understanding of either O’Connor’s art or the philosophers on offer. And in Chapter 5, his sensitive and insightful analysis of a trio of O’Connor’s tragicomically cruel do-gooders—Julian, Asbury, and Sheppard[5]—suffers for the attempt to make this reading conform to the framework of the “second modern man” and to a critique of the historicist romanticism of Rousseau, Kant, and Hegel. Letting go of this scaffolding to let O’Connor’s political wisdom—and Foss’ own insightful readings—shine through would have been very welcomed by this reader. Doing so may have given Foss’ excellent interpretations more space to breathe freely and follow their own interpretive logics, unimpeded by the need to demonstrate connections to familiar themes from the history of western political thought.[6]

Fortunately, these are minor quibbles in light of the achievement of the book overall. And it should be noted that they come from a reader who did not need any convincing to take O’Connor seriously as a writer with much to teach scholars of political thought; a more skeptical reader will likely appreciate Foss’ care and circumspection in aligning his reading of O’Connor with the history of political thought. If the conversations he inaugurates between O’Connor and the canonical thinkers at times feels underdeveloped, that should only serve as a jumping-off point for scholars following in his wake.

More importantly, in the best moments of the book, Foss’ interpretations are so good as to be positively thrilling. For example, the reading of “A Temple of the Holy Ghost” in Chapter 3 builds upon the more limited engagement with Plato in Chapter 2, and explores its religious imagery in rich detail to shine new light on the political implications of O’Connor’s peculiar brand of “Hillbilly Thomism.”[7] And the final three chapters are particularly strong, representing the best sustained stretch of argument in the book. Foss’ reading of “Good Country People” in Chapter 6 is particularly brilliant, not only in its analysis of O’Connor’s critique of Nietzschean (or Heideggerian) nihilism, but also in its perceptive interpretation of a neglected minor character—Mrs. Freeman—which gives novel richness to the story. From there, Foss turns to the idea of tenderness and O’Connor’s critique of the contemporary U.S. regime in Chapter 7. This chapter is the best in the book, fully delivering on the promise to explicate the meaning of O’Connor’s oracular remarks on tenderness, persuasively establishing the significance of this theme to the political insights of her work, and the significance of her thought to a critical analysis of contemporary democratic theory and politics. This chapter alone should make the book required reading for scholars of O’Connor and of modern political thought alike.

Through his insightful readings of these peculiar and delightful stories alongside the history of political thought, Foss’ book offers rewards not only to those familiar with O’Connor’s work, but also to teachers and students looking for a new interlocutor to put in conversation with the familiar voices of Western political thought. Indeed, it would be a surprise if any reader who is also a teacher didn’t find themselves inspired to make space for her novels and stories in their syllabi. Whether readers seek out Flannery O’Connor & the Perils of Governing by Tenderness for its insightful reading of O’Connor’s works or for its tour through the history of political philosophy with a wise and charming peacock farmer for a traveling companion, there is much to be gained from time spent with Foss’ very fine book.

[5] Julian is the protagonist of “Everything that Rises Must Converge,” Asbury Fox is featured in “The Enduring Chill,” and Sheppard is from “The Lame Shall Enter First” (cf. O’Connor, The Complete Stories).

[6] For example, Foss puts “Revelation” in conversation with Plato’s Allegory of the Cave (44-48), but presenting the story largely as a supportive commentary to a familiar reading of The Republic seems like a missed opportunity. Foss declines to explore whether “Revelation” could be read as a critique of Plato, given that the titular Revelation is of a distinctly Christian sort, which involves the rejection of an Earthly social hierarchy. And it was impossible for this reader at least to keep from wondering whether Mrs. Turpin’s fantasies of Jesus allowing her to decide what kind of person to be could be interpreted to suggest a critique of the Myth of Er as prideful heresy.

[7] The term comes from a 1955 letter, and has become a favorite description of interpreters: “Everybody who has read Wise Blood thinks I’m a hillbilly nihilist, whereas I would like to create the impression over the television that I’m a hillbilly Thomist.” Flannery O’Connor, The Habit of Being: The Letters of Flannery O’Connor, ed. Sally Fitzgerald (New York: Farrar, Straus, and Giroux, 1979), 81.

Also see Thomas Pope’s review as well as an excerpt from the book.

Timothy Wyman McCarty is an Associate Professor in the Department of Political Science & International Relations at the University of San Diego. He teaches political theory and his research focuses on democratic theory, theories of complicity and moral responsibility, right-wing radicalism, and politics and literature.

Virtue Politics: Soulcraft and Statecraft in Renaissance Italy
American Nightmares, Zombie Apocalypses, and Tragic Visions: A Review of Paul Cantor’s Pop Culture and the Dark Side of the American Dream
Why Jews Do That: or 30 Questions Your Rabbi Never Answered
Rémi Brague’s Europe, la voie romaine