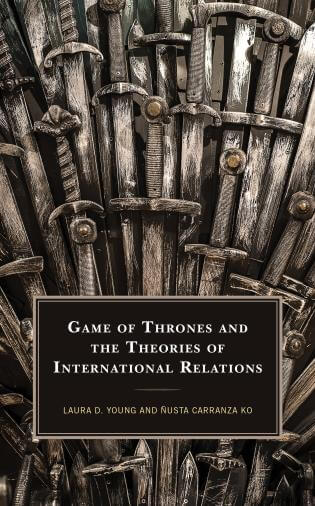 Laura Young and Ñusta Carranza Ko have authored an easily digestible guide to the basic theories and concepts of International Relations through the lens of the hit TV series Game of Thrones. The series garnered dozens of Emmy awards through its eight seasons and saw its viewership steadily grow from a few million to nearly twenty million viewers from its first to last episode.[i] Given the popularity of the show, especially among the 18-29 demographic, this volume seems perfectly suited for introductory classes to International Relations and for fans of the show who want to learn more about politics.

The authors begin by explaining the basics of the field, including the levels of analysis and the prominent theories (realism, liberalism, constructivism, Marxism, and feminism). Importantly, they address how the theories can still be applied to Game of Thrones in spite of the fact it does not really fit into the Westphalian system that all but one (realism) of the theories developed under. The seven kingdoms span two continents and are comprised of a series of lords and vassals, ruled by an absolute monarch, but given significant leeway in their respective regions. One thinks more of feudalism than the modern state when watching the show. Nevertheless, the authors make a reasonable argument for the applicability of these theories to the fictional world of Westeros and Essos. They ultimately define a state not in the more traditional terms of “an entity that maintains control over a territory and its people through the legitimate use of force,”[ii] but rather as “a society with some sort of rituals, traditions, and rules that can differentiate in terms of structural organizations, such as levels of hierarchy, as well as capacity to project power both internally and externally.”[iii]Under the more common definition, the seven kingdoms would be treated as one entity, while the authors’ chosen definition affords the ability to view the interactions between the kingdoms as international, rather than domestic.  Given the drastic differences between the regions and relative autonomy of lords to act within them, it is a reasonable choice.

The majority of the book is dedicated to the application of the major theories of international relations to the series. Equal space is allotted to realism and liberalism, by far the two most dominant theories in the field. The chapter on Critical Identity Perspectives includes sections on Constructivism, Marxism, and Feminism. Each of these chapters contain textbook definitions and explanations of the theories, but unlike the traditional textbook, this work is able to bring in familiar examples from the series, which adds an element of relatability. Most textbooks include historical examples of course, but those tend to be effective only insofar as students have a good grasp of history, something which cannot necessarily be taken for granted at the average university today.

The second section of the book is dedicated to thematic topics, and the authors chose to examine human rights and Indigenous peoples. The human rights chapter zeroes in on torture and women’s issues, both of which fit in quite well with the series. In the next chapter, the authors correctly point out how Indigenous peoples are often marginalized, both in practice and in studies of international relations. Including a dedicated chapter is a good way of bringing attention to the marginalization. However, this chapter is considerably shorter than the other substantive chapters and could have benefited from a fuller treatment, particularly given the recognition that it is often overlooked within the field as a whole. It would have also been beneficial to include at least one more chapter on a thematic topic.  The rules of warfare, for instance, would have fit in quite nicely given the prominence of conflict within the series along with the variety of weapons and methods used (dragons, wildfire, etc.). A discussion about the role of technological advances would have also been appropriate, even though some allowances would have to made with the distinction between science and magic.

Overall, this is an informative and engaging introduction to International Relations. It gives fans of the show a reason to revisit it in a more thoughtful, nuanced manner than a typical first viewing entails. It also gives professors another option to engage students in the study of international relations.

David Whitney is Associate Editor of VoegelinView and Associate Professor of Political Science at Nicholls State University in Louisiana. He is author of Maladies of Modernity: Scientism and the Deformation of Political Order (St. Augustine's, 2019).

The Classics and Christianity

The Jagellonian Conference on Leo Strauss