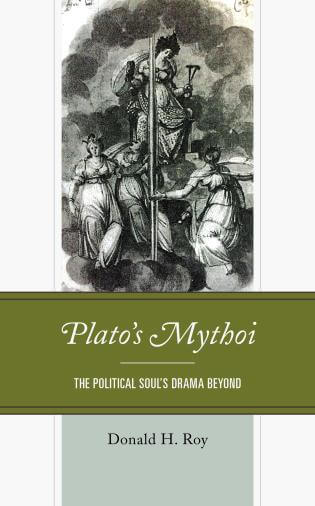 In Plato’s Mythoi, the Political Soul’s Drama Beyond, Donald H. Roy aims to place Plato’s use of mythoi in the context of his dialogues as a whole. He challenges the philosophical interpretation of Plato’s myths from interpreters such as Bambrough and Vlastos, rejecting their interpretations as narrow, rationalistic, and literalist. According to Roy, these interpreters do not notice that metaphor, analogy, and myth are essential to both Plato’s account of logos and the noetic faculty. Roy takes Eric Voegelin’s interpretation of Plato’s noetic faculty, which includes metaphorical, analogical, religious, and mythical dimensions, as a basis and extends it to offer a comprehensive account of Platonic mythoi (250).

Though the book is divided into chapters and not parts, we can distinguish three parts. We may distinguish part one to include Chapters One through Three. This part establishes the relations among key terms, such as metaphor, analogy, logos, and mythos. Chapter One, “Metaphor and Analogy,” argues that metaphor is philosophically important, since it is related to an “ontological experience” (9). Analogy is essential to education. In Chapter Two, “Logos and Mythos in Plato’s Dialogues,” he moves to the nature of logos and its intimate relation to mythos. These first two chapters establish the backdrop for Roy’s cosmology of myths, which he offers in Chapter Three, “The Integral Relationship and Circular Sequence of Plato’s Mythoi.” Part one concludes with Roy’s cosmos of dialogues according to the type of mythos.

Part two includes Chapters Four and Five, which show that Roy cycles orderly through the periphery dialogues in his cosmos. Chapter Four, “The Mythoi in Crisis, Conversion and Descent/Ascent,” and Chapter Five, “The Mythoi of Judgment and Return to Political/Cosmic Foundations,” differently apply a rotation through his cosmos of the dialogues. This part charts the developmental and sequential function of myths. The beginning of this sequence contains myths that reformulate and purify traditional myths, next are the myths of recollection, followed by myths of conversion. The sequence concludes with myths that chart ascent and decent including the judgment of souls and the underlying structure of psychic, political, and cosmic order.

Part three contains Chapter Six (epilogue) and the appendices. The final chapter, “Mythoi in All Their Nobility: The Pathos of Mythos,” seeks to show how pathos in mythoi establishes limitations on hubris and it serves to extend the preceding discussion to popular contemporary myths. The book concludes with three appendices. We saw a version of Appendix A, Roy’s cosmos of the dialogues. Appendices B and C are worth reading, they offer insights that fall between the lines of his text. Appendix B, “Occlusion by Way of Reduction, Issues of Exegesis,” defines certain terms that reference interpretations of Plato’s mythoi. Roy dyslogistically defines “literalization,” “dogmatism,” “Immanentization,” “subjectivism,” and “constructivism.” Appendix C outlines Plato’s discussion of the ancient Greek gods (theoi) in relation to the Judaic-Christian tradition. Roy states that Plato is “mocking conventional Greek behavior,” since “right from the beginning there is monotheism vs. pagan polytheism (307).

Roy confronts a challenging topic. It is not clear why Plato makes consistent use of mythoi. Many interpreters take myths as an expedient way for philosophers to share philosophically justified ends or content with non-philosophers, e.g., the myth of the metals. When we consider the divided line, it does seem that mythos is useful only in eikasia and pistis (the lowest realms of objects) and that it has no place in either dianoia or noesis (the intelligible and the highest realms of objects). Also in Republic, Plato devotes much time to poetry and mythoi in the early books only to seem to banish such imitative arts in the end.

A reader of Roy’s text might think that he means to discuss only the political soul, since his sub-title “Political Soul’s Drama Beyond” suggests a limitation. In which case, the reader might think that he does not mean to discuss the “philosophical soul” or the soul qua philosophical. In this way the reader might think that Roy leaves the philosophical soul untouched. Since the political soul is an embodied soul and mythoi are useful for embodied non-philosophers and since all mythoi are logoi (in some sense) but not all logoi are mythoi (83), one might think that Roy confronts politics and not philosophy. Roy, however, is unequivocal in holding that “mythos and logos need each other” (83) and that “philosophy is mythos and logos harmoniously combined” (251).

Some readers will pause at Roy’s use of Plato’s Seventh Letter, the authenticity of which is currently being challenged (69). These readers will be disappointed to see that Roy does not confront the recent challenges to its authenticity and defend his use of it. Some readers will pause at Roy’s use of the term “collective unconscious,” borrowed from Voegelin, since it connotes Jung, is an anachronism, and assumes a religious monotheistic spiritualism. These readers will likely not be satisfied with Roy’s claim that “Voegelin’s ‘collective unconscious’ best refers to ‘equivalent experiences’ he [Voegelin] finds formulated symbolically in other cultures and languages” (250). Roy’s interpretation challenges the predominant interpretations of Plato.

Readers of Voegelin’s works, and many others, will find much in Roy’s text to investigate. Voegelin’s interpretation of mythos, logos, and nous directs Roy’s path, but Voegelin left much unsaid on this subject. Roy extends Voegelin’s views. He aims to show that mythos and logos are cooperative participants in nous. Nous, then, participates in philosophia, which participates in theoi (the gods, the divine). Roy charts these relations in Plato’s dialogues.

Roy makes an unconventional, provocative, and valuable contribution to the study of Plato’s dialogues. He charts the cycles among his four types of dialogues to the center, but his cosmos of mythoi is more ambitious than he navigates in this one book. We can look forward to a discussion of the four types of mythoi in their own right and to a discussion of additional cycles among them. This text goes beyond previous charted paths and it opens unexplored terrain for studies of Plato’s dialogues.

Please see an excerpt of the book here.

Kirk Fitzpatrick is an Associate Editor of VoegelinView, Associate Professor of Philosophy, and former Director of the Grace A. Tanner Center at Southern Utah University (2012-16). He is author of A Philosophical Reader on Moral Weakness: Akrasia, Weakness of Will, and Practical Irrationality (Linus, 2009).