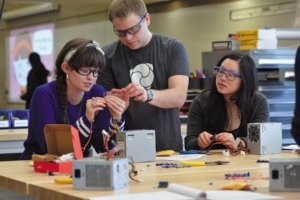 So it is characteristic of us professors of political philosophy to neglect what is really going in the “hard” sciences. I remember, for example, being astonished that Allan Bloom, in The Closing of the American Mind, came close to saying that the one real thing in American universities otherwise deformed by relativism was natural science. And then he said virtually nothing about what those scientists really know. In a similar mode, Mr. Bloom seemed to be all about the life “according to nature,” but he, as a very urban and urbane man, did not notice the natural beauty all around him (see Saul Bellow). And even the virtuous agrarians of the Front Porch Republic seem satisfied to say that it is farmers who know the most about nature, and that all our scientists have become basically scientistic techno-engineers. Well, that is not completely true. Someone might say that those who wonder about the cosmos, the stars, and all that are getting in touch with “pure” nature, and those who are satisfied with contemplating the field behind the barn keep their eyes too focused on the comforts of familiar cultivation. If you want to reflect on what farmers, engineers, and physicists know and do not know, you could do worse than see Interstellar.

In any case, I, in hustling to complete my study of the decline and fall of American higher education, have to say something—and maybe a lot—about the real thing that is scientific higher education in America.

Most of our brainy students are choosing STEM (science, technology, engineering, and mathematics) majors, convinced that such high-level quantitative knowledge is both real and increasingly marketable. It is a bit of a myth that we have a shortage of STEM graduates, although it is true that we can use more really good ones. Our “cognitive elite,” as Cowen and others explained, is increasingly composed of people with the techno-facility required to be on very comfortable terms with “genius machines.” And with the techno-imagination required to found startups, create new apps, and all that.

One piece of evidence among many that these STEM nerds are more in touch with the real world than the rest of higher education is the absence of self-esteem-driven grade inflation. As in the real world of the productive meritocracy, solutions can readily be judged to be either right or wrong. Another piece of evidence is that such programs are relatively untouched by emo/ideological campus political correctness. If you want to see a really diverse student body, walk around the MIT or Cal Tech campuses; it is diversity characteristic of real meritocracy.

Nobody much criticizes the quality of American higher education in engineering or physics. At the heights of innovation in science and technology, we, in fact, rule. Alexis de Tocqueville worried that the restless Americans would be so impressed with the comfort and security provided by technological applications that they would neglect more purely theoretical scientific pursuits.

That observation turns out to be true in theory, insofar as most people appreciate science for what it can do for them right now. But it is not so true in practice. Our universities have also been secure places for theorists who, like Archimedes, disdain practical applications. I refer you to the accurate-enough portrayal of the Cal Tech researchers on TV’s The Big Bang Theory. There is the theoretical physicist who cannot even drive a car, an astrophysicist romantically in wondrous love with the stars and all the marvels of being, the experimental physicist who is competent enough but lacks creative imagination, and the engineer with the mechanical ingenuity to devise space toilets and endlessly useful mechanical hands and generally to serve ordinary human needs. For techno-obsessed American experts, the engineer ranks highest, but the physicist also has the leisure to speculate about string theory and so forth, with not that much attention on whether his efforts to see into the mind of God ever actually pay off.

Well, one more thing for now: I have to notice that at our flagship “great books” colleges—St. John’s and Thomas Aquinas—careful attention is given to what said books say about physics, biology, mathematics, and so forth and a real attempt is made to appreciate, through replication, great moments in the experimental progress of science. My last ISI mentee from St. John’s—who did her internship at The New Atlantis—was mostly interested in natural science.

At Thomas Aquinas, I have been told, they really talk about whether Aristotle or Newton is right on motion. You really cannot be all that scientific if you do not see that there is a case to be made for both great theorists, and the victory of Newton had the disadvantage of limiting our theoretical horizon in some ways, by, for example, detaching the humanities, or distinctively human motion, from much genuinely scientific curiosity.

This was originally published with the same title in The Imaginative Conservative on January 15, 2015.

A New History of the Humanities: The Search for Principles and Patterns from Antiquity to the Present