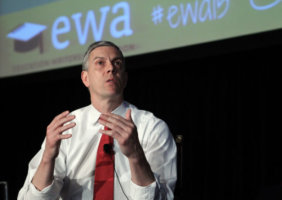 Anyone who has set foot and paid some small amount of attention in a college classroom knows one thing: the true moments of learning are often indefinable, uncategorizable, and unexplainable. No teacher can predict what will make the light bulb go off for a particular student; no student can understand why one sentence or thought will stick with him for decades after graduation. I can recall one English professor of mine who read aloud chapter 23 of Moby-Dick, “The Lee Shore.” It is, in Melville’s own words, a “six-inch chapter,” a short marking of the passing of “a tall, newlanded mariner” named Bulkington. It is also, however, a six-inch synopsis of the book’s themes and a paean to the spirit of manifest destiny and exploration.

I can still picture my professor reading it, and how he seemed almost overcome with the emotion of the passage. I may not recall much else from my college years — Pabst Blue Ribbon being the usual beverage of choice for my bookish, bar-dwelling cohort — but I suspect I will always recall my professor reciting those final lines with a great crescendo of volume and gesture: “Bear thee grimly, demigod! Up from the spray of thy ocean-perishing — straight up, leaps thy apotheosis!” When I later became a professor myself, I read that same chapter to virtually every group I taught, hoping that one student among them would be moved in the same way. It was one of my first lessons in the sheer emotional and metaphysical power of the good, the beautiful, and the true.

Who could have predicted that “The Lee Shore” would move me so? Or that it would stick with me so closely, even 14 years after graduating? No one — and that is precisely how education should be. When you are exposed to (in Matthew Arnold’s famous formulation) the best that has been thought and said, you are led out of a kind of darkness into a world of beauty. As with so many other aspects of life, we simply don’t know what will work in a given situation. We are humble before the great works of civilization, awed by the structural majesty of the Parthenon and the incisive self-reflection of the Prince of Denmark. The best education is that which admits that it is imperfect, that it will do its best to expose students to truth and let things shake out from there. We can control what we bring to students, but we cannot control what they will do with it.

However, because we live in an age of data obsession and managerialism, this view is now, alas, a generally benighted one. Universities are now expected — nay, ordered — to manage every single step of education, from planning to presentation to program evaluation. It is this latter that has become truly tyrannical, and it rears its head under the name of “assessment.” Faculty are now required to continuously, perhaps even constantly, gather feedback and data from students about what is working and what is not. I once taught at a college whose dean suggested we faculty members survey students for 15 minutes at the end of every class — every single class — to determine what changes we needed to make before the next class meeting.

The answer is an old but simple one: when you can’t measure what you think is important, you end up thinking important what you can measure. No one could have measured how I would react to “The Lee Shore” that day, but we can measure a student’s opinion on Melville’s connection to “career readiness.” This is how the dismal god of “metrics” is allowed to determine course content. Education at most universities is now formatted along strictly rationalist lines, and this creates an educational culture in which we focus obsessively on the tiny, measurable islands while ignoring the great ocean of beauty and mystery that make up true education. No, “The Lee Shore” will not explicitly help a student get that summer internship—but is that a reason to dismiss it? Insisting that every moment of time spent in the classroom be measurable and productive is to fundamentally reshape the educational experience along managerial lines.

As a depressing contrast to Melville’s beautiful prose, consider this sentence from an organizational strategic plan: “Provide enriched contexts for Thought Leadership in higher education to promote the values of quality assurance and advancement.”

Now parse it. What does it mean? First there is “enriched contexts” — so vague it could mean virtually anything. There’s a banal piece of TED Talk argot (“thought leadership”) that again reveals nothing. Higher education is a concept we can conceivably grasp, as is promotion. Then, finally, “quality assurance and advancement”: a phrase blatantly taken from the noxious language of the corporation. We are left with, as in so many mission statements, a mélange of terms poached from annual reports and business self-help paperbacks that finally signify nothing.

This sentence happens to be from one of the country’s largest higher education accrediting organizations. The institution where I work is currently undergoing the reaccreditation process through this organization (my views are my own). The way we have responded to this bureaucratic mishmash is lamentably symbolic of how our universities have responded to the colonization of the classroom by corporate forces — a kind of Six Sigma mission creep that threatens the very foundation of liberal arts education. It is common to bemoan how corporate thinking has taken over university administration, but it is only in the last few years that it has launched an incursion in the classroom itself.

Bureaucratic rationalism now pervades our campus, in the form of every conceivable boardroom stereotype: flow charts, assessment schema, complicated organizational diagrams that ostensibly track each step of the educational and assessment processes. This is an attempt to rationally order that which cannot and should not be rationally ordered. True education is more mysterious, more unpredictable, and more situational than the rational structure of technocracy allows. It’s a bit like the neurologist who tells you that an fMRI image of brain activity is somehow a picture of true consciousness and thought — it is to mistake the map for the territory.

Somehow this idea — if we can just get the one true flowchart, the one true rational process — has come to rule our lives, such that education is reshaped to meet the demands of managerialism. It is among the worst legacies of the Enlightenment: the belief that since we are rational animals, then our only true roadblocks must be objective and measurables ones that can be overcome with the tools of science and technology. We become, as Weber predicted, trapped by the iron bars of rationality. We can only operate within its cruel confines. The classroom is restructured according to the business plan, where “thought leadership” and “quality assurance” replace the good, the beautiful, and the true.

Education, like republican government, is supposed to be messy. It should be full of debate and dissent and disagreement in the service of determining a shared understanding. Reshaping it along the explicitly anti-political lines of technocracy, in which messy things are instead recast as ordered based only on what we can measure, is a stark departure from the grand tradition of liberal arts education. Technocracy in the classroom gives us rule by algorithm and expert; it brings with it a homogeneous, universalized plan with no respect given to the local and particular.

There is a line from Eric Voegelin I have tried to bear in mind as I confront these new forces in education: “There are always enough young men with enough spiritual instinct to resist the efforts of ‘educators’ who pressure for ‘adjustment.’” Indeed, we can hope there are enough people like this to resist the incursion of the latest theories from education theorists. I fear, though, that our entire elite class has now arrayed itself against true learning and aligned itself with the flowchart and the assessment matrix. I hope, for the sake of teacher and student alike, that I am wrong.

The tiny, measurable islands are not the full extent of education; the ocean of mystery and beauty is where the true learning happens. In “The Lee Shore,” Melville writes that it is “in landlessness alone” that we find the higher truths, and that it is better to “perish in that howling infinite” than to confine ourselves to the safety of the port. Let us, then, pursue landlessness in education. Let us who care about truth be unafraid to depart those islands and sail into the unknown, where goodness and beauty reside.

R.M. Stangler works in the administration at Donnelly College in Kansas City. He earned a Ph.D. in rhetoric from the University of Kansas. He has taught at the University of Kansas, Donnelly College, and Berry College. His research and writing focuses on Richard Weaver and the Southern Agrarian writers. He is at work on a book about Weaver, agrarianism, and American life.

From the Multiversity Cave: The Students and the State

On the Depths of Villainy