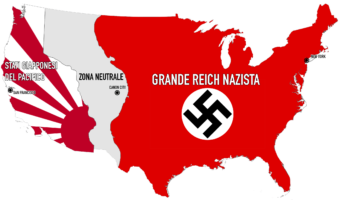 The Man in the High Castle. TV Series created by Frank Spotnitz and adapted from the novel by Philip K. Dick. 2015-present.

Children of Men. A film directed by Alfonso Cuarón. 2006.

The Lives of Others. A film directed by Florian Henckel von Donnersmack. 2006.

One of the great manipulative techniques of political leaders is to claim insight into the nature of history, whether it is more recent pronouncement like George W. Bush’s assertion that history is the global expansion of freedom and democracy or Barrack Obama’s belief that the arc of history bends towards his understanding of justice or past ones like Woodrow Wilson’s proclamation that the United States is “to make the world safe for democracy.” The truth is that nobody knows what history will be in the future: there is no Archimedean vantage point where one can step outside of history to know it. Such attempts are to construct a historical account is to create, to use Voegelin’s term, “second realities” and engage in a type of “magical thinking.” When such claims are made in politics, and people are persuaded in such a belief, great damage is often done to the body politics and to those nations who were unfortunate to be in the way.

One potential cure to magical thinking is the counterfactual. This type of analysis is employed less frequently in the social sciences with its various statistical and rational choice models – which may partially explain why social scientists tend to be bad predictors – but still is used frequently and more effectively in literature, television, and film. The counterfactual shows that history has no inherently meaning or direction. What we think was inevitable or will be inevitable is merely our imposition of significance upon certain events and sequence them in our historical account. The counterfactual demonstrates to us this is not the case: if history could have been different in the past, it can also be different in the future. To speak of an arc of history is simply to practice ivy-educated voodoo.

The recent number of dystopian books, television shows, and films may be a reaction against this Hegelian-speak of history (of course, there are also other reasons that can be attributed to the current popularity of this genre, such as the dominance of globalization and technology in our lives). Dystopian fiction usually expresses our anxieties and fears of the future but it can be set in the past to point out how things might have wound up differently than today. In these two ways, both past and present, the dystopian genre illuminates what our present worries are and demonstrating that nothing was and will be inevitable.

In The Man in the High Castle, we see that agency, or a recapture of one’s agency is the theme that runs throughout both throughout the novel and television series. Having been defeated in World War II, America in The Man in the High Castle is divided into three regions with the Japanese occupying the west coast, the Nazi’s the east, and the intermountain west acting as a buffer zone between the two great global powers. Both the novel and the television series focus on a group of Americans who live in San Francisco in 1962 as subjects of Imperial Japan. Whereas the television series emphasizes the American resisting their Asiatic overlords, the novel examines the psychology of Americans who are subservient and second-rate to their Japanese masters.

If Man in the High Castle looks backwards, Submission peers forward with France electing its first Muslim president. The novel’s protagonist, Francois, is a university professor whose expertise in Huysmans doesn’t lead him to convert to Catholicism but rather to Islam in order to keep his job, gain wives, and, most importantly, provide some meaning to his life. The two traditional sources of morality for France – Catholicism and secularism – no longer serve as viable foundation for the country. Only Islam can provide a spiritual substance to France.

There are several interpretations of the Houellebecq’s novel with no resolution, as one would expect of all serious literature. Is the novel an indictment against Islam and warning to the West? Or is a satire, a projection of our fears about Islam? Is it a condemnation of the spiritual wasteland of the West where we can only find spiritual salvation in a foreign religion? Is it asking the French how they would act if a Vichy-style government was installed now? These and other questions get at the heart of the matter of history of France. By offering a speculative reality of what his country may become, Houellebecq challenges the likes of Fukuyama and others who claim that we are the last men living at the end of history.

The film, Children of Men, also speculates what the future could be like, if humanity could not reproduce. Based on the novel of the same name, Children of Men follows the journey of Theo, a former immigrant rights activist and now cynical British government bureaucrat. He shepherds Kee, who is pregnant, across Britain and to the sea where she boards a ship called the Tomorrow for safety. What we find in a world where humans can no longer reproduce are a police state, suicide kits, and immigrant-right terrorist groups. It is a bleak and depressing picture and clearly a commentary on today’s treatment of refugees and immigrants. But by setting the subject in the dystopian future, Children of Men humanizes the plight of immigrants in a way that news reporters, activists, and politicians can’t. Regardless of our policy preferences, we begin to recognize and empathize with their struggles, hopes, and desires for a better life. Their history, and ours, are not necessary set and could be changed if we wish it.

History is not moved by impersonal forces but by individual choices, as The Lives of Others shows us. Stasi Captain Wiesler monitors the playwright Georg Dreyman in 1980s East Germany in order to find incriminating evidence against him so the Minister of Culture can be with Dreyman’s lover, Christa-Maria. Over the course of the film we see Wiesler change from the consummate bureaucrat to one who recognizes from his surveillance that he is missing friendship, art, and love in his own life. It is human choice, not Marxist historical forces, that shape who we are and what we love.

The dystopian genre, and art more broadly, shows us the possibilities of life, whether in the past, present, or future. The best of literature, television, and film show us that nothing was determined and nothing is foreordained. Those political leaders who claim otherwise should be held in suspect. But we cannot entirely blame them for this, given that their education tends to be in law, history, and the social sciences when instead it should have been in art, literature, and the humanities, for it is in poetry where life can be most learnt.

The Laws Most Beautiful and Best