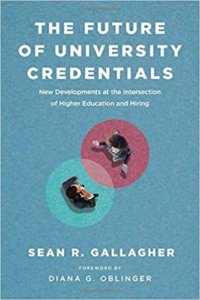 Each year employers in the United States spend more than $120 billion annually on hiring while U.S. higher education is more than a $400 billion segment of the economy. Given the scale of these figures, Gallagher seeks to understand how the higher education system’s production of credentials and the job market intersect. Although there are other forms of credentials granted in a knowledge economy, Gallagher focuses on university credentials, that is, programs and credentials offered or affiliated with universities: doctoral’s, mater’s, bachelor’s, associate’s, certification programs, and professional certifications.

It was in the 1890s, when the bachelor’s degree began to gain wide acceptance as hiring qualification and professional credentials in business and government, coinciding with the maturation of the research university and land-granted schools in the United States. Growth in enrollment in higher education continued throughout the twentieth and twentieth-first centuries with a small dip in 2012-13. Between 1980 and 2010, the number of associate degrees awarded in the United States more than doubled; the number of bachelor degrees nearly doubled; the number of master’s degrees surged 140%; and the number of doctoral degrees increased by two-thirds, equaling in 2010 approximately 1 million associate degrees, 1.7 million bachelor’s degrees, and almost 1 million advanced degrees.

The increase of graduates in higher education coincides with the transformation of the American economy from agriculture and manufacturing to services and knowledge. Between 1910 and 2000, the share of the professional and service workers grew from one-quarter to three-quarters. The growing demand for university credentials and their value in the job market is driven by employers’ demand and the economic value (i.e., higher wage) of a university degree. However, not all university credentials are equal. Science, technology, mathematics, health, and science degrees fare better economically than liberal arts majors at both the undergraduate and graduate level. Also, a university’s reputation has a significant influence on the type of job and wage a graduate receives.

Experience is as important, if not more important in some cases, like in technology, as a university credential for employers in the hiring process. Still, a university degree is crucial for employment, with approximately 50% of jobs in 2015 requiring a bachelor’s degree. The underlying assumption among employers is the human capital theory which contends that skills and knowledge acquired through education and experience drives productivity in the workforce. Critical to this theory is the notion of “screening” or “signaling” where the university credential is associated with “hard” and “soft” skills in the degree holder: critical thinking, leadership, creativity, professionalism, problem-solvers, effective communication, the ability to work in teams, to adapt, and to learn. Interestingly, while the degree matters in hiring, the details do not: graduation counts more than one’s GPA. More critical is the reputation and prestige of the institution than the actual work done by the degree holder.

If the first half of the book is a review of the history of university credentials and how they are perceived by employers, the second examines how technology can play a potential disruptive role in the credentialing process. The first example Gallagher cites is the Information Technology Certifications which emerged in the 1990s and were driven by the private sector rather than schools. Another example is online education and the online university which threats schools’ monopoly on educational credentials. While these technological initiatives are slowly gaining credibility, they are perceived inconsistently by the public and have been partially coopted by universities with their own online programs and, in some cases, states who have created regulatory barriers to the competitors to universities. However, while employers are slowly overcoming their skepticism of online credentials, reputation continues to play a crucial part in whether a credential is valued.

One of the unintended consequences is the unbundling of online credentials with nonprofit, non-educational organizations now offering online credentials (e.g., American Red Cross). Other trends are e-portfolio, a web-based collection of work samples or course outcomes, and competency management platforms, systems that showcase competencies rather than knowledge and thereby allow employers a better sense of an applicant’s skills. Finally, an entire new industry has emerged that digitize, exchange, and verify credentials for universities and other non-profit organizations.

Employers also have adjusted their hiring process by using “talent analytics” and social media sites like LinkedIn to examine applicants. Other companies use pre-hire testing and assessment to find the right match between job and applicant. The most recent trend is employers requiring “success” profiles where applicants must demonstrate their competencies that their degree claims.

Caught between the university and employers is the U.S. Department of Education and accreditation agencies where, depending upon the administration, experiment in credentialing is encouraged or blocked. Still, universities are exploring new types of credentialing like “badges,” “boot camps,” and hybrid courses where certain skill set are achieved by students. There is also variation of the certificate with MOOCs, professional diplomas, and competency-based training.

In the end, the university continues to retain its position as the credentialing agency in society for employers but schools must adapt to the new environment of technological change. This will include more advanced credential attainment and lifelong learning as well as cooperation with government and employers to create a common taxonomy and language for new forms of credentials. The university will also have to be more experiential and project-based in its curriculum and learn from other institutions, including the private sector, to how best align its credentialing.

In spite of this oversight, The Future of University Credentials provides a valuable service in highlighting the role that the university plays in awarding credentials and how employers perceive them. It also portrays the changing ecosystem of credentials where technology and the private sector can play a potentially disruptive role and how universities must adapt and adjust to remain relevant. As technology becomes more pervasive in our lives, The Future of University Credentials is much-needed book for our times.

Faces of Moderation: The Art of Balance in the Age of Extremes

Amusing Ourselves to Death: Public Discourse in the Age of Show Business

The Public Intellectual: Between Philosophy and Politics

Aristotle and Plato on Friendship