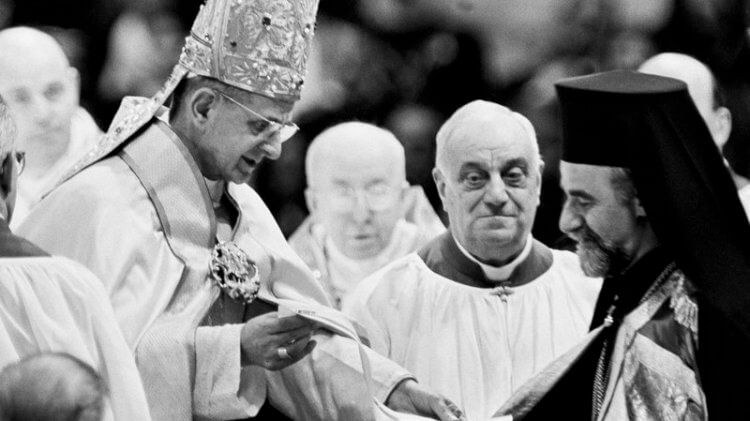 Apart from the Council of Nicaea and the Council of Trent, the Second Vatican Council is arguably one of the most consequential ecumenical councils in the history of the Catholic Church. There is, through the problem of receptivity, tremendous divergent opinions on the consequences of the council and its meaning. For some, the council “modernized” the church toward accompaniment with liberal democratic pluralism. For others, the council restated traditional teaching with modern, and perhaps sometimes ambiguous, language. But this is not an essay on the receptivity of the only ecumenical council of the twentieth century. Instead, this essay will focus on the consummation of the council’s humanist anthropology as mediated and influenced by Scholastic humanist thinking principally contained in the writings of Saint Thomas Aquinas.

Gaudium et Spes, promulgated 7 December 1965, is the pastoral constitution on the church in the modern world and the document containing the rich anthropological theology of the council. The document is unique, insofar that the council itself was unique, in that it is principally concerned with the question quid sit homo: What is man? Prior to Gaudium et Spes, ecumenical councils and their promulgated documents generally concerned questions of the Godhead, Christology, and the ecclesia (and all that the church entails). Gaudium et Spes, then, is the first document in conciliar history that specifically sought to address, in ecumenical fashion, the question of humanity outside of the confines of sacramental soteriology.

Paragraphs 12-17 of Gaudium et Spes should be the focus of any examination of the humanist anthropology of the council. There are reiterations of longstanding patristic and scholastic understandings of human nature in the twelfth paragraph, where the document specifies men and women were created in the image of God “able to know and love their creator, and set by him over all earthly creatures that they might rule them, and make use of them, while glorifying God.” “Men and women,” the document goes on to state, “sharing in the light of the divine mind, rightly affirm that by their intellect they surpass the world of mere things.”. Moreover, “God did not create men and women as solitary beings.” The most significant, to my mind, inclusion of humanist anthropology in Gaudium et Spes is its affirmation of moral conscience and the excellence of human freedom.

This necessarily leads us to ask the question, what is humanism? There are many humanisms nowadays, but in the mid-twentieth century humanism meant something very specific that now runs counter to many secular humanist doctrines. Simply and honestly, humanism is the philosophy that maintains that humans are unique among the world of animals and, more specifically, that humans possess rationality which is what primarily separates them from the rest of the natural world. Classical luminaries from the likes of Plato, Aristotle, and Cicero all affirm this basic understanding of man. Even classical poets, like Ovid, reflect on the rational and erect nature of man among the other creatures of the world. This view of man as erect, rational, and therefore akin to God is also affirmed in the patristic tradition from St. Paul and St. Gregory of Nyssa, to, most famously, St. Augustine. Any humanist philosophy that rejects the exceptionalism of humanity and reduces to humans to a bland sameness with other animals is, definitionally, and historically, antagonistic to humanism. Therefore, the declaration that humans, in possessing a rational soul, “surpass the world of mere things,” is not a modern thesis.

While it is true, as hitherto mentioned, that there are patristic sources that affirm the basic humanist anthropology dogmatic to Christianity, the real blossoming of humanist theological-anthropology in the Christian tradition emerged in the medieval period with the scholastic academicians and theologians. Perhaps none more famous than Thomas Aquinas.

The moral conscience extolled in Gaudium et Spes is neither the relativistic and liberal understanding of whatever one conceives as good one should follow nor the Hobbesian materialization of pleasure and harm. The promotion of the dignity of conscience rests on a moral judgement of actualization, “Deep within their consciences men and women discover a law which they have not laid upon themselves and which they must obey…Their dignity rests in observing this law, and by it they will be judged.” Here, Gaudium et Spes understands human dignity and flourishing being tied to the moral law of judgement and actualization, for the law “which [humans] have not laid upon themselves and which they must obey” is a law which leads to “love” and “tells them inwardly at the right moment: do this, shun that.” In following this moral conscience, the moral law is actualized in human persons and their dignity and flourishing manifests itself.

This is not altogether dissimilar from what Thomas Aquinas defines in the forty-eighth chapter of the second book of Summa Contra Gentiles. Aquinas associates human freedom and flourishing directly with moral judgement, “Moreover, things lack freedom to decide either because they all judgement, like stones and plants which lack awareness, or because their judgements are fixed by nature, like non-reasoning animals.” Aquinas goes on to say that “all things with understanding have freedom of will deriving from understanding judgement, and that is freedom of decision, which is defined as free judgement of reason.” It is patently clear, from Aquinas, that human dignity and freedom rests on moral actualization.

Returning to Gaudium et Spes’ affirmation of moral dignity, conscience, and freedom, it is clear in light of scholastic teaching that the moral conscience and freedom affirmed in the document is one that rests entirely on actualizing the moral law. It is only through this obedience to the moral law, which human reason has the power to know, that leads to loving relationships and human flourishing. This understanding of human flourishing as needing actualization from potentiality is equally Thomistic.

In Quaestio Disputata de Spiritualibus Creaturis, Aquinas maintains the basic anthropological foundation of humanity is in its potential for moral actualization. The form of the human soul, that which is, rests on potential—namely, the potential to know the moral law and act in accord with it. The soul’s actualization therefore rests on its potentiality realized. Thus the dignity of the soul in Aquinas can be paired with Gaudium et Spes’ declaration, “[human] dignity rests in observing [the moral] law.” Humanity’s potential for dignity and flourishing needs realization, just as the highest realization of the human life rests on the soul’s intellectual realization of the moral law.

Given that Gaudium et Spes also declares that humans are not solitary beings, and that they are loving and social animals, the moral law also facilitates relationality among humans from which their flourishing and well-being also depends. Hence, the need to obey the moral law in its relational and social applications also aids in the flourishing of humans. This does have political implications, in the Aristotelian sense. In his Commentary on the Politics, Aquinas maintains, “[N]ature impels all human beings toward association. And the first one to institute the political community conferred the greatest benefits.” The second chapter of Gaudium et Spes deals with the nature of human community and the politics of the common good, promoting communitarianism, the common good, increased relationality and solidarity, and moves with a general Thomistic spirit.

As contained in his Political Writings, Aquinas advocates a strong sense of solidarity and unity, “[T]he good and wellbeing of a community united in fellowship lies in the preservation of its unity. This is called peace.” Gaudium et Spes embodies a strong optimism about this promotive growth of unitive fellowship and the common good reminiscent of Aquinas’ basic outlook, “Because of the increasingly close interdependence which is gradually extending to the entire world, we are today witnessing an extension of the role of the common good, which is the sum total of social conditions which allow people, either as groups or as individuals, to reach their fulfillment more fully and easily…All should therefore be encouraged to play their part in communal enterprises.” Once again we see the compatibility if not outright similarity in the council’s humanist political outlook with that of Aquinas. Peace, as a prerequisite for flourishing and fellowship, does not necessarily need to follow the Kantian pattern but the Thomistic one.

Aquinas also believes that moral excellence, translated into politics, makes for political arête. Aquinas states unequivocally that through political and community association, “human beings reaching perfection are the best of all animals, so also human beings divorced from law and justice are the worst” (Commentary, 1.23). Political order, therefore, plays an indispensable role in cultivating arête and guiding humans toward their proper end (the cultivation of rationality by which the happy life becomes attainable through understanding the Cosmos and Natural Law established by God) in much the same vein as Cicero’s understanding of the purpose of political community.[1]

Thus we see a common Thomistic grounding in Gaudium et Spes’ understanding of humanism and politics. As social creatures, whose dignity and flourishing depends on compliance and obedience to the moral law, obedience to the moral law leads to solidarity and unity in community which manifests itself in practical excellence in one’s personal vocation as much as it does in the collective vocation for the common good. This is something all are called to participate in, “all . . . [are] encouraged to play their part in communal enterprises.” Through this communal, or unitive, enterprise, humans excel in their vocation and become integrated and whole human beings in the fellowship of community and the promotion of the common good which their dignity and flourishing depends.

The English translation of Gaudium et Spes that I cite from are taken from the translation by Austin Flannery, OP.

Geoffrey Hill and the Metaxy

Is America Devolving into Soft Totalitarianism?

How Much Exactly Do I Have to Render Unto Caesar?