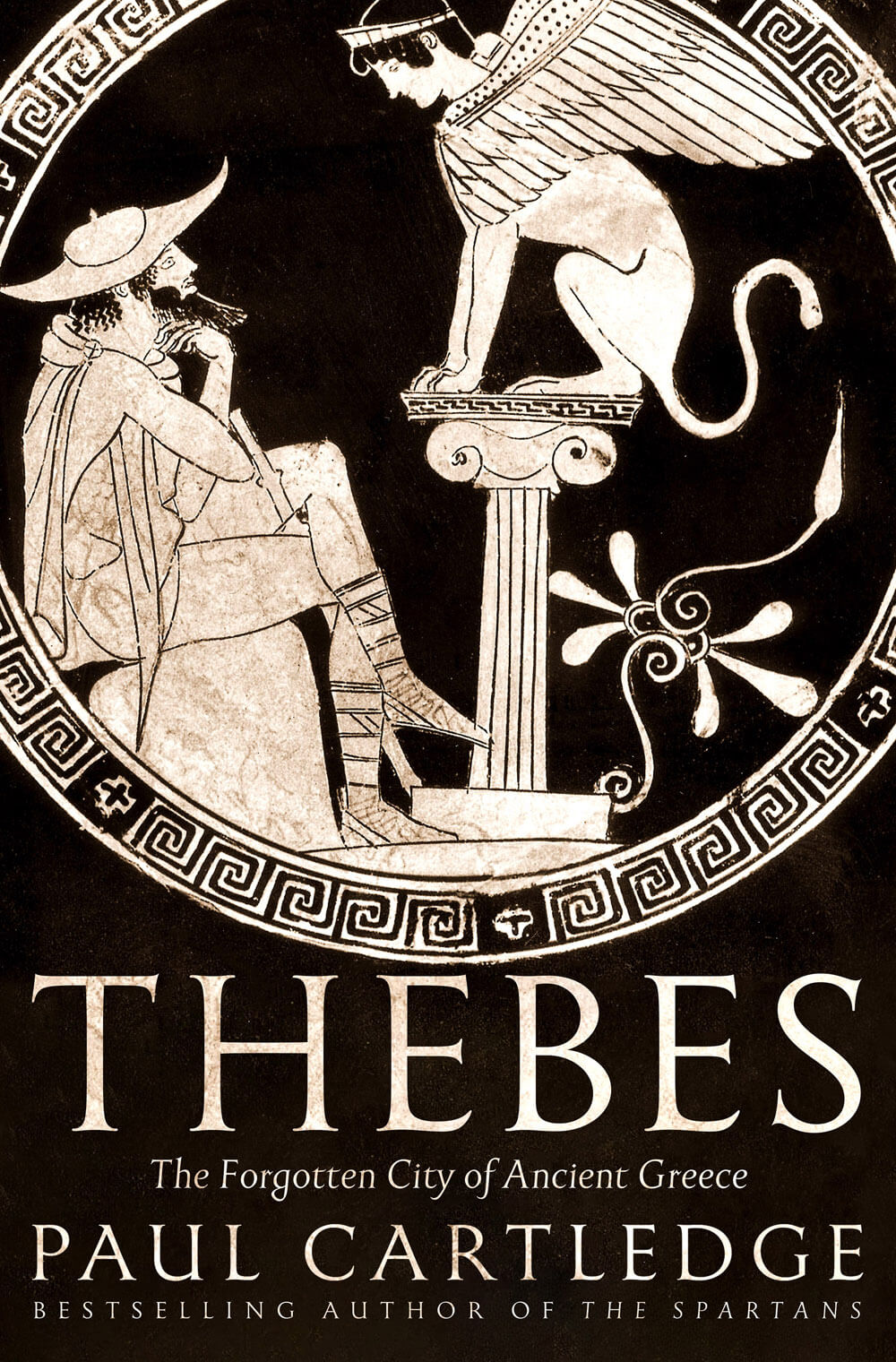 In the annals of ancient Greece, Athens and Sparta looms large. Athens is the city of democratic politics and intellectual refinement, the arts and theatre. Sparta is the manly city, the city of soldiers, kings, and heroic battle. Within that dialectical dynamic, all other cities in ancient Greece get lost in the mist of forgotten memory. But that wasn’t always the case.

Thebes was another great city in ancient Greece. Even if Thebes has fallen on hard times, Thebes is still somewhat known by ancient aficionados. Thebes is the city that Sophocles’s “Theban Trilogy” is set in. Oedipus and Antigone are heroes of the classical literary world and they reside in the once well-known city that achieved hegemony over Greece right before the ascendancy of Macedon. But if we still remember Thebes only because of a few Athenian plays, including Euripides’s Bacchae, then that’s about it.

Paul Cartledge, one of Britain’s foremost popular classicists, has attempted to correct this drift Thebes has experienced. As Cartledge writes, “But why and how has ancient Greek Thebes been ‘forgotten’? And how can we best rescue it, permanently, from oblivion?”

Thebes: The Forgotten City of Ancient Greece, is Cartledge’s attempt to “best rescue” Thebes “from oblivion.” The book follows a somewhat rudimentary formula common in popular history books concisely dealing with a vast swath of time. There is the Thebes of myth, known to us through recent archeological discoveries and ancient poetic stories. And Thebes was the city of mythological stories. Thebes, not Athens, was the mythological center of what became ancient Greece: It is the city of Cadmus, Heracles, and Dionysus. Some of the earliest and most recognizable ancient Greek mythological heroes and gods, not to mention stories, have their origins with Thebes. Then there is the Thebes of history, following the Herodotean cycle, of birth, acme, and downfall. Lastly, we find a contemporary Thebes, a city revived with its “revival.”

Cartledge’s history may be frustrating for some readers. Those who have some familiarity with Greek history won’t find too much new contained in its pages. Anyone who has read even parts of Herodotus, Thucydides, Diodorus—and a few modern histories of ancient Greece—will be retreading familiar territory. The Persian Wars, the Peloponnesian Wars, the Corinthian War, the Theban Hegemony, the Sacred Band, and Alexander the Great all enter Cartledge’s narrative.

Admittedly, the opening of the book is when it is weakest. The rapid tour through limited archeological discoveries and evidence is marred by that unusual problem of trying to popularize very technical data that often becomes a snooze fest for everyone who is not an archeologist. The early chapters portending to be on archeology and religion are, in fact, bereft of substance. All that we really gain is that Thebes did have some gates and walls, perhaps not the famous seven gates of Theban myth, and that Thebes was a center of ancient Greek religious rites and temples.

The book comes into its own in Cartledge’s crafty retelling of familiar ancient Greek (Athenian and Spartan) history but from a Theban, rather than Athenian or Spartan, perspective. And this is desperately needed in a publishing medium that focuses on Athens and Sparta for its commercial value. Why aren’t there many books on Thebes? Thebes doesn’t sell. Simple as that. We know Athens and Sparta. As Cartledge acknowledges in his preface, if Westerners have any familiarity with Thebes it is probably the Thebes of Egypt and not the Thebes of Greece.

While Athens and Sparta still loom large throughout this book on Thebes, Cartledge offers a necessary corrective to the Athenian and Laconic popular imagination where Athens and Sparta are all that matter. Thebes was a significant player throughout ancient Greek history. Thebes sided with the Persians during Xerxes’s invasion. Thebes allied with Sparta during the Peloponnesian War and played an important role as Sparta’s most powerful ally, especially early in the war. The rise of Athens coincided with the declination the Theban-led Boeotian federation, a democratic confederation Cartledge says was akin to the early United States. Thebes was also the city that backstabbed Sparta, granted refuge for the Athenian democratic revolutionaries, and aided Athens’s democratic restoration after Lysander had punished and humiliated Athens at the end of the Peloponnesian War.

The most exciting chapter deals with Thebes’s high watermark. Thebes emerged extremely strong after the Peloponnesian War and was one of the undisputed winners with the humbling of Athens. Thebes then began to flex some of its muscles and allied with Athens to counter Spartan hegemony, eventually leading to the Battle of Leucrtra (371 BC) which brought forth the brief spell of Theban hegemony.

Two men dominate the Theban hegemony: Pelopidas (d. 364 BC) and Epaminondas (d. 362 BC). Both men were so well-known that they merited Plutarch’s attention in his Parallel Lives, though only the biography of Pelopidas survives. Epaminondas was so well-respected that even men like Sir Walter Raleigh (not to mention Montaigne) considered this Theban hero one of the greatest men who had lived in human history. Through the decisive leadership and military exploits of these two men, Thebes experienced a meteoric rise before Philip II’s invasion that led to decisive defeat of the Theban-Athenian alliance orchestrated by the famous Athenian statesman and orator Demosthenes.

“The city of Pelopidas and Epaminondas” is something that should attract our attention. These two men were once well-known, even two millennia after their deaths. As mentioned, not only does Cartledge refer to Sir Walter Raleigh’s invocation of Epaminondas as a great man, but both men were the focus of some of the great classical and neoclassical painters. Benjamin West’s “The Death of Epaminondas” and Andrey Ivanovich Ivanov’s “The Death of Pelopidas” stand as enduring reminders of how important these men were and har far fallen they are indeed since almost no one today is familiar with these heroes of the ancient world. It is here, dealing with Thebes’s “heyday,” that Cartledge’s book shines most brilliantly by bringing back into posterity’s vision the memory of these great men.

But why did Thebes fall so far while the specters of Athens and Sparta still haunt Western Civilization? Sadly for Thebes, and for Cartledge, certain dynamics of the modern world unfairly lead Thebes down the trash bin of history road. Even this book, heroic as it might be in attempting to restore Thebes to the troika of great ancient Greek cities that it deserves to be, still has a lot to overcome.

While Cartledge does an admirable job highlighting the more democratic nature to Thebes’s politics, Athens was the more famous democracy and, therefore, remains the go-to ancient city for a universally democratic West that still wants some historical patrimony to gravitate to. Furthermore, the great underdog story of Greece vs. Persia has Thebes on the wrong side. Moreover, Thebes—irrespective of its rich mythological heritage—didn’t play any decisive role like Alexander the Great did in Hellenization and implanting a long-lasting legacy in the ancient world. Lastly, the age of heroic virtue and great men is undeniably over; or at least it is shunned. So why read Plutarch and encounter Thebes and Theban heroes?

Thebes: The Forgotten City of Ancient Greece finds itself in a difficult spot. A lot of the history that Cartledge recounts is already well-known, even by modest readers in ancient history. Although placing Thebes at the central vantage point, some readers may find this repetitive history boring even if told from the Theban perspective. The great highlight of the book, the sole chapter on Pelopidas and Epaminondas, is too short to justify the book in of itself. Unfortunately for Thebes, the forgotten city is crowded out by more active players and a stronger imaginative memory.

Thebes was not Athens or Sparta. Pelopidas and Epaminondas were not Leonidas, Solon, Pericles, Alcibiades, Alexander the Great, or even Socrates, Plato, and Aristotle. Thebes may have been the city in which some Greek tragedy was set, but we’re more interested in Aeschylus, Sophocles, and Euripides and not the city that some of their plays are set in. So we look to Athens and not Thebes; after all, it is Athens and Jerusalem and not Thebes and Jerusalem.

Paul Cartledge undertook an important effort to restore Thebes to a deserving place in ancient historical memory and love. For those wishing to expand beyond the continuous publication of books on Athens and Sparta, this is a refreshing short read. But one may not find much altogether new, and where new material is covered and exciting it is over right when the reader wishes for more.