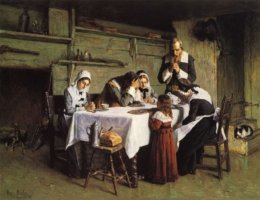 Here’s our most characteristically philanthropic antidote to the excesses of individualism in the American political tradition: the thought and deeds of our first founders—the Puritans.

Philanthropy, of course, means loving concern for our fellow human beings. It means not merely regarding others as being with interests or sovereign free agents or those to be deployed and manipulated in the service of maximizing productivity. It means, in our country, thinking of them as beings with souls, as creatures of a personal God. It’s the egalitarianism of that kind of philanthropy that is an antidote to the distances in wealth, power, and status that are inevitably the result of our liberty.

Our Puritans, as Alexis de Tocqueville explains, were the most serious of philanthropists. They became pilgrims not in the service of some get-rich-quick scheme, as did the first colonists in Virginia, but to make an idea real. They founded a political community based on a completely unprejudiced view of the equality of all citizens under God. So they developed unprecedented political institutions grounded in heartfelt democratic civic duty, and they provided for the education of everyone as creatures born not only to work, but to share the truth about God and the good as revealed in the best of books.

The problem with our Puritans, of course, is they cared too much about directing the development of souls. And so they tended to turn every sin into a crime, and their hugely intrusive legislation violated the properly Christian freedom of conscience. The Puritans, Tocqueville suggests, weren’t Christian enough, insofar as their legalism has no place in the New Testament.

Our second Founders—the men who wrote the Declaration of Independence and the Constitution—were more about individual freedom than personal love. So their excess pointed in the direction of indifference to the well-being, both material and spiritual, of their fellow citizens. Mr. Jefferson, for example, wrote eloquently against the injustice of race-based slavery, but he never did much about it. He was, as Martin Luther King, Jr. later put it, a “white moderate,” who preferred order to justice. And so he, like the lukewarm liberals in the early 1960s, told the oppressed to wait for a more convenient season. Any full account of the history of American philanthropy would have to include a celebration of the huge voluntary association that was the Civil Rights movement, one that brought not only justice but prosperity to the South.

The successors of our original Puritans didn’t hold the power under our secular, rights-protecting Constitution, and so they organized themselves into voluntary associations—such as the Anti-Slavery League—to educate and transform public opinion to link Americans together as citizens and creatures, aiming at profound political change down the road. Their causes were typically those that were embraced by both our first or Puritan and second or Declaration founders. They corrected the individualism of our first founders in the direction of moral egalitarianism, the correction immortally captured by Lincoln in his Gettysburg Address—our renewed and transformed dedication to the proposition that all men are created equal.

Our neo-Puritanical moralism has been fervent and political, as in the abolition of slavery and segregation. And it was sometimes unjustly and counterproductively extreme. Abolition of slavery is one thing, a cause worth the war celebrated in the Puritanical “Battle Hymn of the Republic,” but the prohibition of alcohol is another. Our temperance associations, Tocqueville notes, weren’t short on enthusiasm, and the pursuit of temperance was sometimes not so temperate. Prohibition criminalized a sin, much to the benefit of the (not so) voluntary association called the Mafia. That’s not to say that the temperance movement didn’t do some good in reducing rampant alcoholism among ordinary Americans, and that there still isn’t room for some philanthropy directed to educating Americans on the responsibilities of free men and women.

Tocqueville also celebrates our Puritanical tradition for having protected Sunday from the imperatives of commerce for leisurely contemplation by us all about our origin and destiny as created beings with souls. Part of that tradition is the singularly American institution of the Sunday School, which Christian Americans (here in the rural South, for example) have often taken more seriously than the public schools. The public school and the Sunday School, of course, divided into two functions what the Puritans believed were the comprehensive purpose of the public schools. Now public schools are pretty much, at best, techno-vocational, professing no authority when it comes to God and the Good. The Sunday Schools, meanwhile, teach of us what he or she most needs to know.

A properly philanthropic goal, even today, is to preserve Sunday—and American education—from total immersion into the commercial busyness which is so much of American middle-class life. Philanthropy itself, after all, isn’t about merely instrumental or “bourgeois” virtue; it’s animated by the high virtues of generosity and charity, which are good for their own sake. They are virtues that should be practiced by us all.

First, the coming apart of Americans into two distant classes is especially clear in the lives of men who have been detached from the relational worlds of work and love. So often these men become “de-churched” as they surrender responsibility for their families. The Puritanical/Christian purpose is to minister especially to the most vulnerable and wounded among us. That means today being especially solicitous to those who experience the loneliness of being superfluous. Our churches, in this respect, need the wherewithal to become more egalitarian, to function institutionally as homes for the most homeless. This voluntary effort, of course, is especially indispensable, because there is, in truth, no government program that could do all that much to deal with this collateral damage of the largely beneficial progress of the division of labor in our time.

Second, I would, in the spirit of protecting our genuine moral and religious diversity from total immersion into commerce or schoolmarmish soft despotism, use big money to help our schools and colleges with genuinely religious missions to wean themselves from any dependence on government. I would deploy that “libertarian” means to make them wholly voluntary associations in the service of the whole truth about who we are as relational beings, born both to be stuck with virtue and joyfully to share the truth in common. It’s our religious schools—such as the Catholic parochial schools—that have been, in truth, even more successful than our Sunday schools in devoting themselves to the uncondescending egalitarianism of our original Puritans. Some kinds of higher education are for everyone.

The truth is that the Puritans are a distinctively American heresy, just as much as the Lockean deism of Mr. Jefferson is. The distinctive grace of American religion and American education has not been a uniform devotion to truth and excellence, but a kind of moral and intellectual diversity not found in other countries.

It’s properly conservative to aim to preserve the greatness that is that diversity from every form of leveling uniformity. And once government and accrediting associations start to back off, as they might well under President Trump, it’s the job of private philanthropists to pick up the slack by showing their class. They can show they know the money is good insofar as you know how to spend it in the service of that progress toward wisdom and virtue that should be the course of every human life.

The point of liberal education is to come to terms with the lifelong learning required to know the privileges and the responsibilities given to every free and relational being born to know, love, die, and be redeemed, as Bob Dylan says, by serving somebody.

This was originally published with the same title in The Imaginative Conservative on January 10, 2017.

What Is the Constitution For?