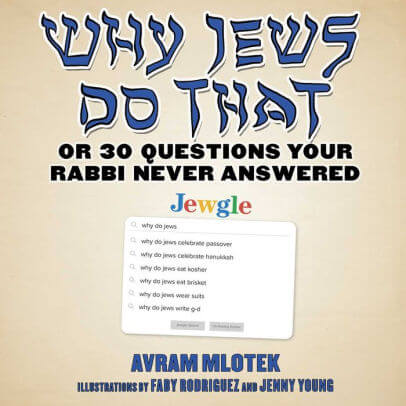 Why Jews Do That: or 30 Questions Your Rabbi Never Answered. Rabbi Avram Mlotek with illustrations by Faby Rodriguez and Jenny Young. New York: Skyhorse, 2020.

You have a friend who’s recently become curious about Judaism. She knows that you are a religious Jew and that you observe all kinds of seemingly strange, countercultural rituals at ostensibly random times of the day, week, month and year. Now, however, she asks you if you can explain to her what it is exactly that you do, and why do you do it. And, she says, could you recommend her a book that she’d be able to read over the weekend that would clarify to her, in an entertaining, educational, and easily digestible way, why observant Jews do what they do?

Where do you even begin? Do you tell her to read the entire Torah? The Talmud? The Shulkhan Arukh (Code of Jewish Law)? The Jewish tradition contains so many great (if dense and complicated) books compiled over so many hundreds and thousands of years that the task of telling someone who’s interested in Judaism what to study to get better acquainted with the faith is like giving someone a lawnmower and then saying, “okay, now go and mow the state of Nebraska.”

Fortunately, you now have a very simple solution. You give your friend the newly released Why Jews Do That: Or 30 Questions Your Rabbi Never Answered,” written by Rabbi Avram Mlotek and illustrated by Faby Rodriguez and Jenny Young. Why Jews Do That, as its subtitled helpfully explains, contains thirty questions—and, even more helpfully, answers—about basic Jewish topics, organized by theme: time, props, purpose, grub, and God. (If you’re wondering why grub—aka food—deserves to be one of the four major pillars of Judaism, you’ve clearly never been to a synagogue Kiddush luncheon on a Saturday morning.)

Thus, in Section I—the section on time (which the book appropriately begins with, considering that the first commandment given to the Jewish people in the Torah is the commandment to sanctify time by declaring the new month upon seeing the crescent moon)—contains answers to perennial questions such as “Why does my Jewish coworker have a million holidays?” “Is there a Jewish Halloween?”, and “Do Jews believe in heaven and Hell?” As a movie person and especially as a longtime lover of Coen brothers’ films, I especially loved the first topic in this section—“’I’m Shomer Frigen Shabbos’ means what exactly?”—accompanied by an illustration of the iconic The Big Lebowski characters Walter “shomer frigen Shabbos” Sobchak and The Dude gathered around a Sabbath table replete with wine goblets, grapes, candles, and braided braid. I must say, this picture really ties the book together. (By the way, the book really does say “frigen”—instead of the word Walter actually uses in The Big Lebowski—making it suitable for all ages, not just those who are of drinking and voting age.)

Section II of the book—“props”—deals with questions like “why do Jews wear pope-like caps?”, “what’s with Hasidic Jew garb?”, “why the shawls in shul?”, and “what’s inside the funky amulet hanging on the door?” As to the question about the pope-like caps—otherwise known as “yarmulkes” (or “kippot” in Hebrew), Rabbi Mlotek explains that these head-coverings do not go back to the days of Moses at Sinai, but only as far back as the era of the Babylonian Talmud (which is still pretty far back). These head-coverings were originally meant to instill a reverence of God within their wearers, but, as Rabbi Mlotek expounds, today these head-coverings are perhaps more noteworthy for their signaling to others of the wearer’s ideological affiliation.

My favorite section of Why Jews Do That is the section on theology—or, as it’s titled in the book, “Who, What, Where, When, How, and Why God?” This part of the book really excels in conveying the complexities and paradoxes of Jewish theology in a clear and relatable way. “God in the Five Books of Moses can be angry, vengeful, passionate, God in the Prophets is compassionate, loving, forgiving, and jealous. God in the Writings is more absent as humans becomes more and more of the protagonists….It’s almost as if the Bible anticipated Walt Whitman’s response, ‘Do I contradict myself? Very well, then I contradict myself. I am large. I contain multitudes.’” Just as does God Him/Her/Itself.

This is a very fun book to read, and an almost even more fun book to look at. Rodriguez’s and Young’s aesthetic sensibility is delightful—inventive (if you look closely you’ll notice that the English letters “Why Jews Do That” on the cover are actually made out of rearranged Hebrew letters), colorful, and playfully referential, with visual homages to everything from Grant Wood’s American Gothic and Oprah to Shakespeare, Leonardo da Vinci’s The Last Supper, Jean-Paul Sartre, and even the old “Oh Yeah!” Kook-Aid ads. Learning about Judaism has never been this fun.

You give your friend a copy of Why Jews Do That, and flipping through it—her eyes lighting up more and more after perusing each page—she thanks you profusely and says she can’t wait to get back home and read it. You tell her “you’re most welcome,” smile, and, as she departs, you borrow the words that the great sage Hillel told his disciple who had desired to learn about Judaism while Hillel was standing on one foot: “Now go and learn.” (Lawn mowing optional.)

Daniel Ross Goodman is a writer, rabbi, and doctoral candidate at the Jewish Theological Seminary of America and studying English and Comparative Literature at Columbia University.