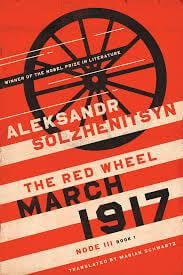 Historians like Eric Hobsbawn had argued that the Russian Revolution was the seminal event of the twentieth century: “for “a mere thirty to forty years after Lenin’s arrival at the Finland Station in Petrograd, one third of humanity found itself living under regimes directly derived from the [revolution] . . . and Lenin’s organization model, the Communist Party.”[1] This was the standard view among historians until 1989-91 when the Soviet Union and its empire collapsed. Revising their views that the Russian Revolution was historically inevitable, a worker’s revolution, or one of history’s great deeds, historians after 1991 instead perceived it as a matter of blind luck, a platform to discuss marginalized groups and their roles, or as a one of history’s great dead ends soon to be forgotten.[2] Given this current consensus among historians about the Russian Revolution’s irrelevance, what does Solzhenitsyn’s March 1917 offer us? Why read another book about a revolution that no longer matters? And why especially read a literary rather than a historical or political work about it?

Addressing these questions, we start by looking at Solzhenitsyn’s 1970 Noble Prize Address where he affirms Dostoevsky’s thesis that “beauty will save the world.” With specific attention to works of art, Solzhenitsyn states:

“A work of art bears within itself its own verification: conceptions which are devised or stretched . . . come crashing down [and] convinces no one. But those works of art which have scooped up the truth and present it to us as a living force–they take hold of us, compel us, and nobody ever, not even in ages to come, will appear to refute them.“[3]

For Solzhenitsyn, beauty cannot match the will of those bent on its destruction (e.g., ISIS’s 2015 destruction of antiquities in Palmyra), for its power is not assertive but rather evocative in nature. It calls one to recognize and accept the truth in one’s own life.[4] Even if the actual artifact is destroyed, a work of art’s beauty cannot be extinguished by such barbarianism: one can remember it and thereby preserve it as a guide for one’s soul.

Solzhenitsyn’s literature is a testament to Dostoevsky’s dictum of beauty saving the world. Whether writing in the Soviet Union–in the gulags or under KGB surveillance–or the United States, where his views were misunderstood and misrepresented, Solzhenitsyn’s works still endure in spite of the political and cultural barbarianism of our age.[5] His works resonant with his readers because they convey truth; but Solzhenitsyn’s novel, short stories, and poetry are also beautiful because they are literature. Unlike the accounts one finds in history, literature does not aspire to objectivity. Literature lives in the world of the particular and, in some sense, is truer to our experience of reality than other disciplines like history where concepts can be “devised or stretched” to a point where they “convince no one.” Although it too can be distorted, literature has the unique capacity to persuade us of its truth when our own experience of life confirms it: it “bears within itself its own verification.”[6]

March 1917 accomplishes this feat by concretely portraying the chaos, confusion, and tumult of the February Revolution. Solzhenitsyn’s depiction of the bread riots is an example where literature can portray more accurately–and more beautifully–than a historical analysis.[7] Whereas historians may speak of underlying structural forces or transnational factors, the novelist focuses on the individuals and the choices they make, or fail to make, when confront with a crisis. We see Aleksandr Rittikh, the interim minister of agriculture, face the concrete problems of how much bread was needed for Russia to manage (one hundred million pounds), how much to charge for it (fixed prices), the conditions of the weather and infrastructure (the roads starting to become impassable due to winter), and his appeal to patriotism rather than coercion to implement his plan. This account makes us imagine how Rittikh felt, thought, and acted during the bread crisis; that there were multiple factors that affected the outcome; and that human agency existed that could have solved Russia’s food storage.

As we see in the novel, Rittikh’s sensible recommendations were tabled by the Duma’s Progressive Bloc whose leaders spoke in abstractions rather than specifics: the relationship between the Duma and government is more important than solving the bread crisis; criticism of the government without any practical solutions is the first priority of business; conspiracy theories of grain reserves being hoarded by the financial class is something that needs to be addressed. As Solzhenitsyn writes, although “Perhaps for the last time has the hand of fate raised the scales on which Russia’s future is weighed . . . The Progressive Bloc was silent: If truth is not on our side, then away with truth” (31, 23). Historical analyses of the Russian Revolution, whether past or present, commit the same error as the Progressive Bloc in living in a world of abstractions rather than particulars and thereby cannot see the central issues at hand.

These abstract historical accounts of the Russian Revolution run contrary to the traditional way the discipline has been practiced with its focus on particulars. This is why Aristotle argues that history is less scientific (philosophical) than literature (poetics) because it is concerned with the particulars, whereas poetics, although preoccupied with specifics, touches upon universal themes which history does not.[8] However, the historical studies of the Russian Revolution have been and still are influenced by abstract theories (e.g., Marxism, gender studies, postmodernism), subsuming the world of the particulars to generalizations, in order to appear more scientific. By violating the Aristotelian dictum on focusing on particulars, historians of the Russian Revolution substitute their ideological or intellectual fantasies rather than the facts of the past in their accounts.

Solzhenitsyn’s novels are more align with Aristotle’s claim that by working with the particulars, literature can be more scientific (philosophic) than history because it “exhibits the process of thinking one’s way to a conclusion as more instructive than one which simply states or proves the conclusion.”[9] It is the beauty, when associated with truth, portrayed in literature that makes a conclusion that is “more instructive” than one finds in history. Instead of imposing theory upon particulars, the novelist finds beauty, truth, and insight into the human condition in the exploration of particulars that rise to the surface of the text and resonant with the reader.

Literature also can be a type of witness to history and, in the process, captures the beauty that resides in life. Even when events turn out horribly wrong, as portrayed in March 1917, it is our revulsion at certain characters and their choices that confirm that we have within ourselves the resources to recognize what is beautiful and true. Protopopov’s smug cluelessness, the Emperor’s cheerful incompetence, Kerenskys’ cynical opportunism, Rodzyanko’s moral cowardice and retreat into legalism agitate us because we know they are acting contrary to what is truthful and required to preserve the regime. Literature that can invokes this response within us because of its beauty, which Solzhenitsyn portrays.

In the Russian tradition, writers play the role of prophet that condemns society’s faults and prescribes its solutions.[10] The writer therefore is not only a witness to history but also a prophet who assumes the responsibility of his or her society, the voice that speaks on behalf of all of Russia. Their work not only symbolizes what is true and beautiful–or when it lacks it–in Russia but also is a document that preserves the memory of a specific time to which future readers in the “ages to come” can return. March 1917, and the entire Red Wheel project, is Solzhenitsyn acting as both prophet and witness to Soviet Russia in the hope his fellow countrymen can learn from their past mistakes and pave forward to a better future. Only literature can accomplish this; and this is why March 1917 should be read rather than the slew of recently published historical books about the Russian Revolution. It saves our souls and therefore the world.

nobel_prizes/literature/laureates/1970/Solzhenitsyn-lecture.html; originally in Fyodor Dostoevsky, The Idiot, trans. Richard Pevear and Larissa Volokonsky (New York: Alfred A. Knopf, 2002), 382. It is the character Teréntyev who asks Prince Myshkin, “Is it true, Prince, that you once said that beauty will save the world?”

[4] In the creation of art, the artist may succumb to fantasies or distortions of reality rather than capture its truth. In such cases, this type of art would not qualify as beautiful for Solzhenitsyn.

[6] While it is true that many may reject the beauty of art because they are insensitive to it, this does not mean the truth claim of art is invalidated. It is a mystery of life that since the beginning of humanity only a few have the spiritual and intellectual resources to recognize and accept the beauty and truth of art, philosophy, and religion. This situation and the problems that flow from it are best portrayed by Socrates in the cave analogy of the Republic (514a-20a)

What Numbers Can and Cannot Tell Us about Russian Politics

The Protestant Revolution in Theology, Law, and Community