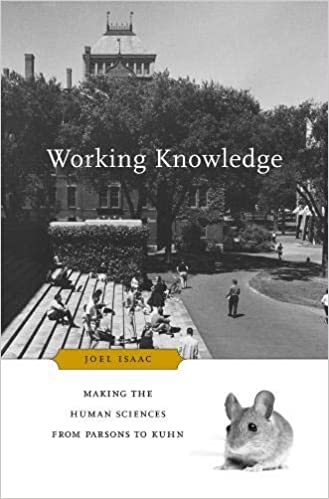 Working Knowledge presents an institutional history of the “human sciences” at Harvard University with attention to Parsons, Skinner, Quine, and Kuhn. It was the practice of pedagogy and inquiry and the irregular institutional arrangements between the human and natural sciences that ideas about epistemology, the nature of theory, and what constituted scientific activity emerged in mid-twentieth century Harvard. Concepts such as “system,” “theory,” “operational definitions,” “meaning,” and “paradigms” were the products of this time at Harvard and still resonant today.

Instead of reinforcing the epistemological rubrics of positivism, interpretivism, objectivism, relativism, naturalism, and so on, Isaac looks at how these concepts and motifs arose from everyday aspects of the theory of knowledge. By examining the historical context and its complexity, Isaac shows that these ideas come from research practice and pedagogy as much as from abstract thought and publication. Thus, the motives for modeling of the human sciences after the natural ones was more complicated rather than a form of materialist reductionism.

Isaac retraces the history of the human sciences since World War in the United States in three distinct epochs. The first (1940s-60s) was the belief that the human sciences had reached maturity in joining mathematics and the natural sciences as value-neutral disciplines; or, as better known by those who work in the field, behavioral science. The second (1960s-1970s) was the interpretivist critique of behavioral science, such as found Kuhn’s The Structure of the Scientific Revolution and in the works of Isaiah Berlin, Alasdair MacIntyre, C. Wright Mills, Louis Mink, and Hayden White. The third (1980s-1990s) was the exhaustion of the interpretive revolution with its idea that the human sciences could be divorced from the natural sciences. Meanwhile behavioralist scientists continue their work in rational choice theory, modernization theory, and the cognitive fields, especially in A.I. Despites attempts at reconciliation, there is no yet no common set of terms in which negotiations between behavioralists and interpretivists may be conducted.

The intersection of different epistemological techniques of scientific philosophy and the actual practice of human science at Harvard University from World War I to the Cold War lead to the synthesis of Pareto’s works being adopted and taught there. Biochemist Lawrence Joseph Henderson drew from Pareto’s social theory of sentiments, residues, and derivations to understand the heterogenous components in society. Henderson’s enthusiasm for Pareto’s theory spilled over into discipline-building and pedagogical efforts where the case-based method became accepted as the way to teach the human sciences because it taught students a research process grounded in empirical reality.

Also influential during this time was the “operational analysis” championed by experimental physicist Percy Williams Bridgman: scientific concepts were simply the operations involved in applying them with the habit of action associated with a concept constituting the meaning of the concept itself. Several members of the Pareto circle drew on Bridgman’s view of operational definition to undergird their own Paretian conception of scientific knowledge.

Analytic philosophy was able to provide a framework that could match the scientific philosophy of Pareto. Isaac follows the career of Quine as representative of philosophy’s push for relevance by incorporating empirical knowledge into its discipline. Having been a student at Harvard where disciplinary boundaries were fluid, Quine saw philosophical problems were best approached as part of an ongoing enterprise of knowledge-making in the empirical sciences. For instance, technical questions of logic could be referred to physics and psychology for better answers than remaining in the department of philosophy.

However, attempts at institutionalizing this interdisciplinary approach failed. Talcott Parsons established the Department of Social Relations (DSR) in 1946 that combined the disciplines of sociology, social psychology, clinical psychology, and cultural anthropology with the aim of creating a “basic social science.” However, the core senior faculty could not agree what was basic social science or how to practice it. The Department consequently failed to crystalize as a discipline.

If the DSR showed the drawbacks of formalizing interdisciplinary programs, Thomas Kuhn’s early career reveals the benefits of not being formed exclusively by disciplinary monotheism. He studied various scientific practices, different pedagogical techniques, and several kinds of epistemologies, drawing upon multiple disciplinary knowledge for his own work. Paradoxically his most famous work, The Structure of the Scientific Revolution, decoupled epistemology from practice and technique and was contrary to Kuhn’s own experience as a scholar.

Knowledge is not merely the reflection of ideas but also a result of practices, that include research, teaching, methods, institutional support, academic subcultures, and individual reflection. This practice-oriented account of knowledge at Harvard University offers encouragement for those who seek to overcome the artificial and ideological barriers among disciplines in the human science. A masterful account of how the human sciences flourished at Harvard and providing an explanation as to why, Working Knowledge not only looks back at the past but provides a blueprint forward of how we can add to the knowledge to the human sciences.