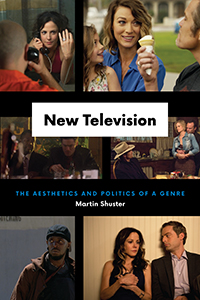 New Television: The Aesthetics and Politics of a Genre. Martin Shuster. Chicago: University of Chicago Press, 2017.

Martin Shuster’s New Television: The Aesthetics and Politics of a Genre makes the case that recent television programming, from the mid-1990s to today, constitute serious works of art as part of the genre of television and the moving image. Working in the tradition of Emerson, Thoreau, Robert Warshow, and Stanley Cavell, Shuster’s reflections of television as art is part of his own interest and experience in television and how it makes him part of a community of other like-minded people. By examining an art form for mass societal consumption, Shuster follows Warshow in showing the philosophical significance and justification of these recent television shows.

The book itself is divided into two parts, with the first examining how television situates itself in the ontology of the moving image and the second looking at three shows: The Wire (2002-8), Weeds (2005-12), and Justified (2010-15). Along with an introduction and conclusion, the book consists of five chapters. The first part has two chapters; the second part three.

Chapter one, “Worlds on Screen,” examines the ontology of the moving image by engaging the works of Cavell which sees film as possessing its own reality and not merely representing something. The medium is the reality. But this reality of film is not our reality: it is forever separate from us because it possesses its own ontological existence. This is why films are “screened” before us, showing us their worlds. Because films take the responsibility of showing us their realities rather than representing one, we remain forever “present” in their worlds – we retain our individuality and authenticity of existence – because, paradoxically, we accept our absence from them. We do not represent reality, we partake in it.

Twin Peaks (1990-91), X-Files (1993-2002), and Fringe (2008-13) are televisions shows that illuminate how film possesses its own reality with a reworking of the police procedural genre into something new: a “multiepisodes stories and mythologies, both focus explicitly on the visual, manifestly worldly elements of the medium” (45). These shows have combined historical and aesthetical elements of film into something new, creating a world that has its own reality rather than representing one which viewers would recognize.

Chapter two, “Storytelling and Worldhood,” looks at the relationship between storytelling and the ontology of film. Adopting the works of Arendt, Benjamin, and Cavell, Shuster argues that storytelling is fundamentally about what it means to be human and film and television are excellent examples of this. Film and television form the foundational narrative in our culture, almost possessing a mythical status in society, and can have a connection to our world depending upon the context when the film is screened. Film and television therefore allows us to explore normatively a world, whether theirs or our own, without resorting to the actual violence that these experiments would require.

The next two three chapter examine specific televisions shows. Chapter three analyzes The Wire as a type of tragedy where the political, social, and economic institutions of Baltimore have failed. In spite of this tragedy, reconciliation is sought and achieved by certain characters in the show. But what makes The Wire groundbreaking is that presents the collapse of normative authority in Baltimore, ushering in the “new television” where societal institutions are portrayed without a moral compass. What unites these various shows – The Walking Dead, The Sopranos, Breaking Bad, Deadwood, Twin Peaks, The Shield, Boardwalk Empire, Oz, True Blood, and many more – is the utter and complete collapse of normative authority in their worlds.

The one institution that remains somewhat intact, and appears to have a residue of moral authority, is the family in The Wire. This may strike some as true; others are sentimental; and for all certainly strange for a show that deconstructs every other institution (e.g., police, schools, the unions, city hall, the media). In chapter four, “The Gangster, Boredom, and the Family,” Shuster shows how the family is subjected to the same critique in the television show, Weeds, which The Wire fails to do. Shuster employs Heidegger’s account of boredom to account for Nancy’s criminal actions in this gangster/suburban genre and how normative authority in the family has collapsed. But with its collapse of authority, the family can reinvent itself into something new, as Shuster argues: “how families serve the function of incubating natality, of producing novelty, most basically in the form of the infinite conceptualization and execution of its arrangements and most ambitiously in the creation and formation of someone new” (169).

The final show analyzed is Justified where Shuster focuses on the friendship between Raylan and Boyd as similar to the debate between Cavell and Rawls about moral perfectionism. Cavell believes that friendship is the basis of the modern, democratic state – “in conversation, I come to determine my standing in social space, and thereby to whom I am beholden and to whom I oppose” – and that moral perfectionism “requires a constitution of the public and at the same time an institution of the private, a new obligation to think for ourselves, to make ourselves intelligible, in every word” (192). Cavell’s discussion of The Marquise of O_ is an illustration of his point. The Marquise is raped by the Count and yet she accepts his hand in marriage because he had ultimately acknowledged his deed publicly and in front of all. She accepts his humanity as flawed. Likewise, the friendship between Raylan and Boyd is reestablished on the violence of a lie at the end of the television series. The line, “we dug coal together,” is not only an acknowledgement of their shared past but how they both want to understand that past in the same way.

Shuster’s New Television is an amazing marriage of pop culture and modern philosophy without being too esoteric or too dumbed-down. Too often academic works about popular culture is a place where interesting thought dies, but this book is the exception. By employing Cavell, Arendt, Heidegger, and others, Shuster seamlessly blends their thought in his analysis of the new television that has defined mass and critical excellence in the arts today. It is an important, and enduring contribution, to our understanding of television, art, and philosophy for our times.

A Political Companion to Flannery O’Connor

Pride Goeth Before a Fall: Humility too?