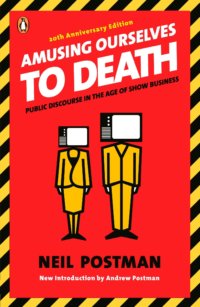 In spite being published thirty-four years ago, Neil Postman’s Amusing Ourselves to Death is more relevant today than it was published in 1985, although the nature of the medium has changed from television to the iPhone and Internet and Las Vegas has been eclipsed by Silicon Valley as the metaphorical city of our national character and aspirations. We now live moreso in the world of the image and electronics rather than the world of the word and ear. The medium of this new way we interact with the world and with ourselves is the metaphor of how we see and exist as digital selves subject to constant manipulation by us, corporations, and governments. There is no constant, enduring self: only metaphors that continually change as new images appear.

The result of this “great media-metaphor shift” is that “much of our public discourse has become dangerous nonsense” (16). Postman shows how public discourse was generally more coherent, serious, and rational when print was the dominant medium of public discourse and how this has changed under the medium of television – and later the image and Internet – where emotive appeals are made by pundits, predictors, and public relationists. Although the older mediums of speech and word have not entirely disappeared, they have become supplanted by the image and do not dictate how we as citizens discuss things publicly. This fact strangely is overlooked by those who continue to advocate for some form of public reason or deliberative democracy, not recognizing that this activity presupposes the preeminence of the speech and word in the culture. It is not clear how public reason, whether in speech or in print, would break through the dominance of the image in our society.

The monopoly of the printed word in early American public discourse yielded the “typographic mind” that demanded logic, rationality, and evidence to structure argument. Even advertising was “regarded as a serious and rational enterprise” until 1890 “whose purpose was to convey information and make claims in propositional form” (59-60). The printed word shaped every facet of public discourse, creating an “age of Exposition”:

“Exposition is a mode of thought, a method of learning, and a means of expression. Almost all the characteristics we associate with mature discourse were amplified by typography, which has the strongest possible bias towards exposition: a sophisticated ability to think conceptually, deductively and sequentially; a high valuation of reason and order; an abhorrence of contradiction; a large capacity for detachment and objectivity; and a tolerance for delayed response” (63).

This age was replaced in the twentieth century by the “Age of Show Business” where communication became severed from transportation, beginning with telegraphy that erased state lines and connected the entire country together. The telegraphy created its own definition of discourse that “would not only permit but insist upon a conversation between Maine and Texas” (65) and, in turn, introduced “large scale irrelevance, impotence, and incoherence.” Information was a commodity that was context-free and did not have to serve any social and political function but only satisfy curiosity and interest. Newspapers soon followed suit with the speed of the news delivered and from what distances defining their mission rather than the quality or utility of the information provided. With this new abstract and remote information, people were confronted for the first time with too much information while simultaneously have their capacity for social and political action diminished, for “in both oral and typographic cultures, information derives its importance from the possibilities of action” (68).

The “Age of Show Business” was also when the image – initially in photography – eclipsed word and speech for how we communicate. Unlike language which represents the world as an idea, the image presented the world as an object to be controlled and manipulated. Lacking syntax or the capacity to be understood as a sequence of propositions, the image still today appeals to our emotions rather than our reason, with the resulting public discourse reduced to ad hominin attacks, virtue signaling, and political correctness.

When the image and instant communication came together as a single enterprise, first in television and later in the Internet, it became the only reality in which we acknowledge and with which we interact. Except for a few specialists, nobody knows how it works and thereby achieves the status of myth, becoming the reference point of our reality. Entertainment – amusing ourselves to death – is the content delivered not only because people want it but because the medium of the image dictates it. Unlike the printed word or speech, the image is impervious to rationality. And by the time one has rationally analyzed it, a new image has quickly replaced the old one.

Postman showed how the image has dominated the public discourse in our news, culture, religion, education, and politics in the 1980s so it is no longer rational, coherent, or relevant. Today one could say the situation has only gotten worse – as Andrew Postman intimates in the new introduction to this book – with every person, having access to an iPhone, being a director, actor, and screenwriter of his or her own show. Postman’s warning of our culture of becoming Huxleyan and burlesque, where we watch ourselves by our own choice, has proved to be true. Privacy is willingly given up for a technology that provides us the latest trends and toys for our amusement.

Postman concludes that “our philosophers have given us no guidance in this matter,” neglecting the role that technology plays in forming public ideologies (157). Philosophers have ignored the following questions Postman poses:

“What is information? Or more precisely, what are information? What are its various forms? What conceptions of intelligence, wisdom, and learning does each form insist upon? What conceptions does each form neglect or mock? What are the main psychic effects of each form? What is the relation between information and reason? What is the kind of information that best facilitates thinking? Is there a moral bias to each information form? What does it mean to say there is too much information? How would one know? What redefinitions of important cultural meanings do new sources, speeds, contexts, and forms of information require? Does television, for example, give a new meaning to “piety,” to “patriotism, to “privacy”? Does television give a new meaning to “judgment” or to “understanding”? How do different forms of information persuade? Is a newspaper’s “public” different from television’s “public”? How do different information forms dictate the type of content that is expressed?” (160)

Although philosophers have addressed questions about technology (e.g., the ethics of technology), not enough have written about the role of information, technology, and democracy. These questions are critical ones that need to be asked and answered for our democracy to survive and, in this sense, Neil Postman’s Amusing Ourselves to Death remains even more relevant than ever in this age of the image and the Internet.

The Cosmology that Modernity Teaches Us

The Craft of Thought: Meditation, Rhetoric, and the Making of Images, 400-1200