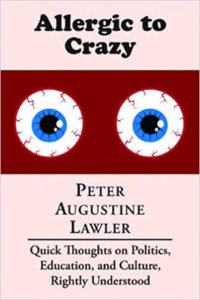 Peter Lawler’s Allergic to Crazy is an urbane and insightful commentary about American popular culture, politics, religion, education, and technology. The title of the book is itself taken from a song by Nashville songwriter Don Schlitz which is about leaving a crazy woman; but here, in this book, Lawler’s title refers to Americans’ existential reaction to the craziness just beneath the surface of their civilized sophistication. For Lawler, contemporary Americans are sophisticated transhumanists who seek to be liberated from the limitations of their bodies, pursue their inclinations instead of their principles, and speak in the language of autonomy while living a life of conformed productivity. This paradox of living one way while thinking another, and the kinds of daily craziness Americans encounter as transhumanists, is the subject of this book.

The book consists of seven parts: 1) Movies and TV; 2) Happiness; 3) Christianity; 4) Virtue and Politics; 5) Higher Education; 6) Science, Technology, and Modernity; and 7) History/Localism. The individual chapters are two or three pages, as the book is mostly a compilation of Lawler’s posts on the BIG THINK website. The bloggers on BIG THINK are the transhumanists about which Lawler speaks: progressive and libertarian, indifferent to religion and morality, entrepreneurial and techno-enthusiastic, and uninterested in the lives of ordinary Americans. Some of the other chapters are also drawn from the First Things and POSTMODERN CONSERVATIVE websites where Lawler highlights the craziness of certain conservatives, particularly libertarians, and localists. Lawler is more interested in the craziness of both the political Left and Right and how these camps attempt to paper mache their underlying existential experience of loneliness in the cosmos in their transhumanist projects of individual and societal liberation.

In the first section, Lawler critiques a variety of contemporary films and television shows, from The King’s Speech, Never Let Me Go, and Up in the Air to Mad Men, Friday Night Lights and Curb Your Enthusiasm. For Lawler, these shows reveal how morality has been redefined from one of traditional virtues that were displayed by heroes and ordinary people to technological and economic productivity of transhumanists. The old hereditary aristocratic virtues found in The King’s Speech have been supplanted by the democratic meritocracy of The Social Network where the millions of online friendships that exist distract us from Aristotelian ones. The concerns of the soul, manners, and the enjoyment of life have been swapped for the worries of bodily health, personal autonomy, and economic productivity. With this new account of morality, American popular culture suggests that America is headed towards the dystopian or transhumanist path described in Never Let Me Go, in which human clones are created to donate their organs to “normal” human beings.

With this forewarning of America’s possible future, Lawler next turns to the themes of happiness and Christianity as possible antidotes to the contemporary condition of democratic meritocracy. In both of these sections, Lawler emphasizes the importance of the Puritans – and Tocqueville’s recognition of them – in the American experiment of self-government. Religion, as Tocqueville observes, saves Americans from the degrading self-absorption of the transhumanists and prompts them to common moral duties. The spirit of political liberty depends upon the spirit of religion; or, as Christopher Lasch puts it, “the central paradox of religious faith: the secret of happiness lies in renouncing the right to be happy.” Lawler provides several examples of how this paradox manifests itself in American life in our understanding of holidays to concerns about biotechnology. In spite of their attempts to discover immortality, transhumanists cannot get rid of the indefinite longevity of religious eternity which lies underneath the surface of their projects.

In “Virtue and Politics,” Lawler covers an array of topics from 9/11 to the Tea Party to NPR from the postmodern conservative perspective. This position differs from other conservative groups, such as the localist and libertarians. Postmodern conservatives are oppose to excessive libertarianism and support federal intervention in areas like civil rights, social security, and Medicare: the question is not whether to abolish these programs but how to make them sustainable in a changing America. Postmodern conservatives also oppose localists, who Lawler continues to criticize in the seventh section of his book, “History/Localism.” Local life has its own pathologies and is actually less racist and anti-Semitic because of federal intervention. By steering a middle path between libertarianism and progressivism, postmodern conservatives support federal government invention in limited areas of people’s lives, pitting them against localists, but they also lack the belief in the innate goodness and effectiveness of government that progressives possess.

The next section, “Higher Education,” looks at the state of university education in America and the role that conservatives can play in it. In these chapters, Lawler examines the problems of technology in the classroom, whether teaching Great Books is as effective as its proponents claim, the “hook-up” culture on campuses, and attacks on tenure. In these and other issues related to higher education, conservatives have a part to play in the defense of liberal education to promote the leisurely and attentively reading of the best books in disinterested pursuit of truth. Recent attempts to defend liberal education – the so-called critical skills argument of thinking and communication – are ultimately unpersuasive for Lawler as these cognitive faculties can be better cultivated in the sciences and engineering. What liberal education can offer that the technical disciplines cannot is the cultivation of the productive citizen. Needing to do a lot of untechnical reading unrelated to most work experience, the productive citizen requires a liberal education to be able to navigate the issues in front of him or her as an engaged member of the community. Although liberal education is ultimately about leisure, Lawler recognizes that the citizenship argument is a superior defense of liberal education than the skills argument, and that it is one conservatives can support.

In the next section, “Science, Technology, and Modernity,” Lawler looks at America’s transhumanist future. The fundamental error of modern science is to abstract human beings from their models: the world has been, is, and will continue to be anthropocentric, perhaps even theocentric, in spite of the scientists’ best attempts to erase human beings from their equations. For instance, human beings have no natural duty to the earth; rather they have a natural duty to each other first, which may include preserving the earth. The abstract nature of science and technology’s concepts and language seeks to squeeze human agency out of its models and thereby lead to the false hope of a transhumanist immortality. In a variety of areas, Lawler shows how this attitude of scientism manifests itself in biotechnology, space exploration, and health care and how Americans must be wary of the promises being made for a transhumanist future.

Allergic to Crazy is an accessible, witty, and astute account of America at the beginning of the twentieth-first century. Lawler provides a balanced, thoughtful, and nuanced perspective on an array of topics that are relevant to ordinary American lives. By exploring the craziness beneath the smooth surfaces of the sophisticated transhumanists’ existence, Lawler uncovers the existential loneliness and quiet despair that they suffer and their futile attempts to provide meaning for their lives in a succession of projects. In spite of the transhumanist’s best attempts, the human condition is constant and perhaps the postmodern conservative’s acceptance of it is a better alternative than the transhumanist’s effort to erase it from their souls.