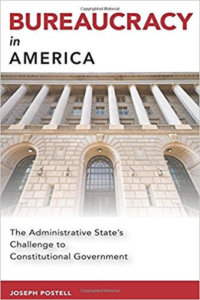 The administrative state was proposed during the Progressive Era as a scientific and therefore politically uncontroversial means of regulating American society and the American economy. Progressives demanded that constitutional government, with its real or alleged inefficiencies, corruption, lack of expertise, and bias in favor of limited government, give way to rule by neutral, impartial, scientifically-minded, professionally educated, and experienced experts. Progressive reformers wanted American democracy to create a space for this new technocratic aristocracy, one dedicated to the common good and rendered safe for democracy by its subordination to the democratic branches of government. Politicians would tell administrators what needed to be done and provide them with legal authority and funding; administrators would independently determine how to achieve the goals assigned to them. Politics would thereby be separated from and superior to administration, and neither would interfere with the other. However, despite enormous political victories that were secured by Progressives and New Dealers and that helped to establish the administrative state in American political life, the administrative state has never enjoyed the legitimacy that its most ardent supporters wanted for it. Today, neither liberals nor conservatives are happy with the administrative state. In something of an echo of Progressive complaints about constitutional government, we are variously told that the administrative state is inefficient, or prone to corruption, or insufficiently attentive to scientific expertise, or biased in favor of limited (the complaint of liberals) or unlimited (the complaint of conservatives) government.

The ongoing controversies over the administrative state have prompted a growing academic interest by scholars skeptical of its fundamental premises and concerned about its ongoing effects on our constitutional order and our freedoms. Joseph Postell is one of these scholars. He is an associate professor of Political Science at the University of Colorado—Colorado Springs. His Bureaucracy in America is an impressive and welcome volume that gives us a very full history of the administrative state and permits us to see with greater clarity the defects of both the original vision of the administrative state and recent efforts by liberals and conservatives to cope with its ongoing problems.

Postell’s book recounts in detail the history of administrative power from colonial America to the present day. In the colonies, administrative power was largely centered in the judicial branch, which in turn was kept in check by frequent elections, common law restraints, and juries. Administrative officers were supervised by courts and could be held responsible for damages under common law. From the Founding until the Civil War, “administrative law was tightly constrained by basic principles of American constitutionalism, particularly accountability through electoral representation, decentralization of power, separation of power, the rule of law, and nondelegation [of legislative power from Congress to administrative bodies]” (315). During this period, the nation benefited from a broad consensus among all three branches of government that administration could and should operate under the Constitution of 1787. Some scholars claim that the creation of the Interstate Commerce Commission and the civil service reforms of the 1880s were the first steps in the direction of the modern administrative state. Postell carefully corrects these views. Supporters of the ICC and the Pendleton Act very much had traditional constitutional restraints in mind.

Concerned about the immense power of the new administrative state under Franklin Roosevelt, skeptics in Congress sought legal restraints on it, culminating in the Administrative Procedures Act of 1946. A growing body of administrative law permitted a re-imposition of some measure of the judicial restraints on the administrative state that Progressive reformers had sought to eliminate. This somewhat hybrid system of deference and restraint betrayed a lack of full confidence in the administrative state by an ascendant postwar liberalism that was otherwise quite sure of itself. By the 1960s and 1970s, those doubts among liberals grew significantly when they began to suspect that agencies were no longer pursing the common good because they had been “captured” by private actors. The response of liberals was to move even further from the Progressive vision of an administration freed from the judiciary. They expanded judicial oversight of administrative agencies, expanded standing to sue, and encouraged a host of public interest groups to press agencies to aggressively pursue the common good, as they understood it. In practice, this meant judges and liberal pressure groups second-guessing agency procedures and decisions so as to conform to liberal policy preferences and outcomes. The reaction of conservatives in the judiciary was to insulate agencies from judicial and liberal pressure group influence by supporting Chevron deference and other measures aimed at shoring up agency autonomy.

There were two massive ironies in this legal battle. Liberals had come to adopt a key pre-Progressive Era insight that Progressives had rejected: close judicial oversight of agencies is necessary. For their part, conservatives had come to adopt the Progressive Era view that agencies needed to be relatively unrestrained by courts. Liberals came to their revised view because of the hard experience of seeing a supposedly progressive administrative state act in ways that departed from progressivism. Conservatives came to their revised view because they (opportunistically) believed that administrative autonomy would serve conservative ends under conservative presidents, and because they were unwilling to question the fundamental progressive premise that legislative authority can and should be delegated by Congress to agencies.

The troubled history of the administrative state clearly points to a need for massive reforms. Postell wants to point the reader to a recovery of the pre-Progressive understanding of administration. He directs our attention to the continuing relevance of the older understanding of the Constitution, elements of which have in fact been used to cope with the difficulties and failures of the administrative state. As the primary institutional repository of knowledge of the Constitution, the judicial branch should be leading the way to a recovery of American constitutionalism. Yet on the Supreme Court, only Justice Clarence Thomas has raised the possibility of reinstating the nondelegation doctrine. We are led to suspect that there is a great need for better legal education on the bench. As a perhaps first and most important step along the way to that education, judges, politicians, and the American people must come to see that by delegating legislative authority to bureaucrats, one reproduces in the bureaucracy, in distorted form, the political battles that would otherwise take place in Congress. When we come to see that legislative authority is inherently political and that it cannot be reduced to a scientific exercise, we will be prepared to see all of that authority transferred back to Congress, where political struggles are rendered legitimate by means of republican institutions.

Postell’s book is an important step toward the full education that this country needs if it is to solve the problem of the administrative state. He shows us that reform is both necessary and possible. It is necessary because the inherently political struggles over the administrative state satisfy neither liberals nor conservatives, and betray as hollow the Progressive promise of scientific administration. He shows us that it is possible by pointing us to a constitutional and workable means of regulation in the experience of nineteenth century America. The history that he lays out is carefully researched and thorough, and should persuade both liberals and conservatives. His conclusions, logically derived from this history, point to a recovery of the Constitution of 1787. They should gain the willing assent of all thoughtful readers. Judges, politicians, activists, serious citizens, scholars and (not least) law and public administration students should all read this book and reflect on the constitutional and political disorder of the administrative state and, as his last chapter title puts it, the administrative state’s “ongoing crisis of legitimacy.”