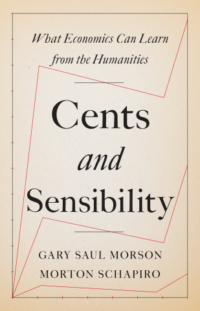 Cents and Sensibility: What Economics Can Learn from the Humanities. Gary Saul Morson and Morton Schapiro. Princeton: Princeton University Press, 2017.

The crisis of the humanities has been well-covered with a decline in students enrolling in its programs, an oversupply of doctorates who cannot find an academic position, and a diminishment of respect for these subjects because there are no jobs for these graduates, especially when compared to STEM (science, technology, engineering, mathematics).[1] Gary Saul Morson, a scholar in Russian literature, and Morton Schapiro, an economist and president of Northwestern University, have co-authored a book to show how the humanities can contribute to the social sciences, particularly in the field of economics, and why they matter. Cents and Sensibility not only addresses a timely and relevant issue of our day but does so in a way that is seamlessly written by these two authors and exemplifies the best of public scholarship.

Interestingly, the discipline of economics – and more broadly the social sciences – have failed in their recent predictions about recessions, recovery, and elections. The credibility of social scientists is currently being question as personified in the election of Donald Trump who dismisses the advice of government experts. For those in the humanities, the situation is not much better. The most recent attempt to make the humanities relevant is to model these subjects after the social sciences, a “humanomics,” rather than believe that they have something genuinely important to offer. Cents and Sensibility adopts this latter path, showing why both economics and literature matter and what each discipline can learn from the other as they are rather than transforming themselves into something new.

Specifically, the authors argue that economics can learn from the humanities in three distinct ways to help economist think better. First, the humanities can provide a cultural context of individual decision-making: people do not make decisions in a vacuum and the humanities can show how cultural factors shape individuals’ character and thought. Second, people tell stories about themselves in order to be understandable; therefore, economists should learn to tell stories about their findings if they want to be publicly understood. Finally, economics inevitably involves ethical questions that are not reducible to economics or the social sciences. The humanities can provide ways to think through these ethical questions for economists, revealing the strengths and limitations of their own perspectives (e.g., recognizing that not everything can be mathematized).

The authors adopt Tolstoy’s, Berlin’s, and Bakhtin’s theory that great literature is too complex to be captured by any theory and therefore is a source of wisdom that cannot be obtained elsewhere. Thus, the authors are seeking a dialogue between the disciplines of literature and economics rather than a transformation of one field of knowledge into another. Both authors seek a dialogue of approaches to see how each one understands reality, hoping to show economists the benefits of studying the humanities and giving humanities scholars the confidence in their own subject.

The book consists of eight chapters, with the first chapter being an explanation and justification of the project. Chapter two examines predictions and how Berlin’s “hedgehog” and “foxes” can be helpful to economists: the hedgehog believes there is a simple set of rules that govern all the apparent diversity that we confront, while the fox thinks this is paranoia and that reality is ultimately too complex to be knowable. For economists, it is often better to be a fox, although the discipline tends to breed hedgehogs. Chapter three showcases the power of stories in higher education’s concerns about enrollment, teaching, data reporting, and relations with state and federal governments, while chapter fours and five continue to show how to integrate the approaches of literature and economics to analyze and understand medical ethics and global economic development.

Chapter six reiterates the value of the humanities and stresses how they develop the capacity to empathize with others who have different experiences (as well as offering the tried-and-true argument of fostering good writing and critical thinking skills). Chapter seven reflects how economists might have developed differently if the discipline has been more receptive to the humanities. Unfortunately, the authors do not cite John D. Mueller’s Redeeming Economics: Rediscovering the Missing Element which does what Morson and Schapiro asks. The book concludes with a reiteration about the importance of dialogue between these two disciplines.

Cents and Sensibility is a marvelous book that illuminates the benefits of an interdisciplinary approach. It shows the value of both literature and economics, of the humanities and the social sciences, and what each discipline can learn from the other. Those in American higher education would be well heeded to read Cents and Sensibility and think of ways to adopt this approach in the classroom, scholarship, and public service. The book is especially important for those in the humanities, showing that if they wish to remain relevant in today’s culture, then they should be more confidence of their own approaches in what they can contribute to our understanding of the world. How this can be done can found in this book.

The Intimate Universal: The Hidden Porosity Among Religion, Art, Philosophy, and Politics