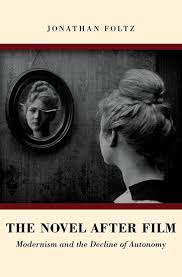 The Novel After Film: Modernism and the Decline of Autonomy. Jonathan Foltz. Oxford: Oxford University Press, 2018.

What is the novel after the invention of cinema? For Foltz, the relationship between the novel and film is a paradoxical one with both mediums indebted as well as distrustful of each other. The invention of cinematic narrative has forced novelists to recognize they had to adapt to the techniques of film. This was particularly true for modernist novelists of the 1910s-30s who grew up with cinema yet defended the novel’s aesthetic legitimacy as the only discourse that could convey subjective experience, perspective of character, and irony. In spite of this defense, novelists, critics, and philosophers continue to speak about the decline of the novel and its autonomy as an art form with the emergence and dominance of film.

In The Novel After Film, Foltz focuses on five conceptual figures in the novel – literary form, character, point of view, omniscient narration, and irony – that characterizes modernist literature and how they were influenced by its cinema’s equivalents. In the first chapter, Foltz examines literary form by pointing out that thinkers like Roger Fry, Clive Bell, Vernone Lee, Jose Ortega y Gasset, I. A. Richards, William Empson, and others have failed to account for the anxiety of the novel losing its autonomy with the rise of film. During the modernist period, film was considered an aesthetic paradox where it was detached from life that literature aspired to achieve but also lacked the form and style of “true art.” But for Foltz this criticism of film actually reveals the anxiety of the novel’s stature because film had seemed to achieve something the novel could not in accurately reflecting ourselves to ourselves.

Chapter two examines the concept of character and how Virginia Woolf’s comments about film could guide the future of the novel beyond modernism’s preoccupation with psychology. For Woolf, film showed something different from subjectivity but was not entirely unrelated to it – a “likeness to thought” rather than thought itself. Film was able to evocate emotions that were not bound to characters and portrayed life in a way that had eluded novelists. Woolf’s own later writings, such as The Waves, moves past a focus on individual psychology towards something lucid, unreal, and formless, resembling what one could find in film.

The conflict between the novelistic point of view and the practice of cinematic spectatorship is the subject of chapter three with attention to H.D.’s contributions to the film journal, Close Up. Foltz argues that H.D.’s style of film criticism – repetitive, digressive, and inconsistent – influenced her rejection of imagism in poetry and led her to adopt prose experimentation in the 1930s. Her rejection of literary conventions was similar to the experience of watching film where viewers could translate the images projected on the screen for their own interpretation. The point of view has been entirely dislodged where now both film and the novel could be seen from multiple “eyes” or perspectives with none privileged.

Chapter four examines modernism’s doubt in the authoritative character of narrative omniscience. Foltz focuses on the late modernist work of Henry Green who recognized that film introduced a mode of storytelling that lacked a narrator and therefore novelists should abandon omniscient narration. Literature should only present and not tell the reader what to think about events. In his novel, Party Going, Green makes the authorial omniscience nothing more than a fantasy about the lives of others, as unstable as the projected dreams of spectators who watch film..

Foltz’s concluding chapter explores the possibilities of novelistic irony with film showing how novelists can employ parody, satire, and farce. Aldous Huxley lamented that cinema can achieve automatically what writers labor to express, such as the disassociate ideas through juxtaposition. Huxley’s dystopian novels borrow from these techniques of films to present a bleak and apocalyptic world without a narrator: all is left is the world to satirize itself. Huxley’s and others fascination with film reveals not only a loss of autonomy for the novel but a path for the novel to reinvent itself for the future.

As The Novel After Film shows, the literary history of the novel is not a straight line because the history of the novel has been written elsewhere – in film. Thus, to understand the decline of the novel’s autonomy after film is to understand film itself. Foltz’s book brilliantly shows how this can be done by examining the relationship between film and modernist literature. What we discovered is how writers criticized and learned from film in order to move past the modernist novel. But this success came at the cost of autonomy of the novel, now indebted to film for its future.

Islam and Democracy in Indonesia: Tolerance Without Liberalism

Reading Maxwell in Time of Pandemic