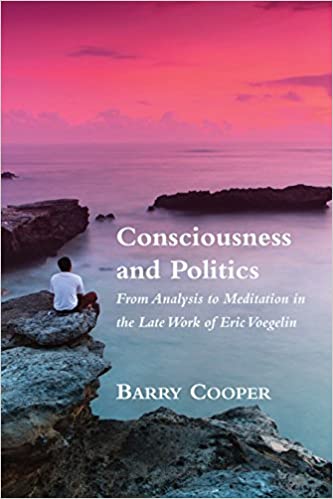 Consciousness and Politics. From Antiquity to Meditations in the Late Work of Eric Voegelin. Barry Cooper. South Bend, IN: St. Augustine’s Press, 2018.

Consciousness and Politics outlines its three objectives in its preface. First, the book is a sequel to Cooper’s Eric Voegelin and the Foundations of Modern Political Science in the further exploration of Voegelin’s methodology. Second, it examines how and why Voegelin moved from conventional textual analysis to meditative essays, such as in the fifth volume of Order and History. Finally, the book considers the anti-Christian charge against Voegelin’s political philosophy. The book accomplishes all three of these tasks and more, leaving the reader wanting to re-read the Voegelin’s own work to glean new insights.

The first chapter is a detailed account of Voegelin’s failure to finish his eight-volume History of Political Ideas. For Voegelin, an “idea” was a “sentiment,” “evocation,” or a “finite cosmos” that constituted a political reality for society. Political scientists faced a unique challenge in accounting for ideas because there was no “objective” position for them to observe and describe the phenomenon. As a result, the political scientist was tempted to invoke new ideas – ideas which referred to non-reality – rather than contemplate the political phenomenon. Ultimately Voegelin recognized that there was more to political reality than ideas and that he should focus on experience rather than ideas as the fundamental unit for political analysis.

In his exchange with Schütz, Voegelin formulated a philosophy of consciousness to understand experience. According to Voegelin, there was not an absolute beginning point for a philosophy of consciousness because consciousness cannot be turned into an object to be grasped. It was only when one reflected upon consciousness did one realized that it transpired in a historical context of a person, society, and world. Thus, it was not only that ideas that had a historical context but the political scientist’s own reflection upon them was an event in history. For Voegelin, to write a history of political ideas necessitated a critical reflective analysis of his own thinking and methodology.

Rather than focus on ideas, Voegelin turned to a “historicity of truth”: to restore the experiences that have led to the creation of certain concepts and symbols or to restore meaning to those concepts and symbols that have become opaque. The political scientist’s task therefore was two-folded: to account for the actual course of events in history and to understand the “historicity of truth”: how human beings and societies understood themselves as meaning revealed itself to them in history. However, “historicity of truth” should be not be confused with historicism. “Historicity of truth” adopted God or transcendence as the criteria to evaluate existential meaning whereas historicism was a form of philosophical relativism that has no criteria other than its own belief that all meaning was equally subjective and consequently relative.

Next Cooper traces the genealogy of Voegelin’s “Gnosticism thesis” from the History of Political Ideas to The New Science of Politics: the desire of man to revolt against reality and transform it into his own image. Because Voegelin looked at the underlying experiences of the political phenomena, he could develop a genealogy of Gnosticism from fourteenth-century Christian mystics to eighteenth-century Enlightenment thinkers to twentieth-century totalitarian leaders. Gnosticism’s attempt to transform reality was in contrast to Christianity’s promise of a transformed other-world reality. The question for Voegelin then became how could the Church be both concerned with radical transcendence and simultaneously the cares of this world; or, as Cooper states, Voegelin realized that “the question of Christianity and culture was central to any philosophy of history” (99).

Chapters three and four are a review of Voegelin’s first three volume of Order and History with the Israelites breaking from the cosmological models for existential meaning with the covenant between God and themselves as first articulated by Moses and later the prophets. Likewise, the Greeks moved from a cosmological account of the world to one of myth and philosophy, the latter which, for Voegelin, was “the experience of the soul and its right order through orientation toward the invisible God” (CW 14: 492). In both civilizations, consciousness became “differentiated”: it proceeded past the cosmological order of meaning into something new and different.

In chapter five, Cooper shows how Voegelin revised his Gnosticism thesis, especially in its application to modern ideologues, and invented new concepts that political scientists could adopt, such as “metastatic apocalypse,” “egophanic revolt,” “magic,” and “second reality.” The reason to incorporate these new terms was the linguistic confusion about what constituted reality: seventeenth-century Puritans incorporated language referring to God in their Gnostic enterprises whereas the Soviet Union explicitly rejected any mention of God. Yet both seek to transform their dreams into reality. Hence, the need to provide more precise language to account for the experience to revolt against reality, whether it is “Gnostic,” “metastatic apocalypse,” or “second reality.”

Chapter six is an exploration of Voegelin’s theory of history with attention to the fourth volume of Order and History. For Voegelin, the search “for the constants of human order in society and history” lead him to conclude that there was not a constant in history but “the constancy of a process that leaves a trail of equivalent symbols in time and space” (251). Thus, it was the search for meaning that was constant in history – the “equivalent of experiences” – and from which humans made meaning in myth, ritual, ceremony, and symbols. Every equivalent symbol in the historical field was engendered by a person on a specific occasion in search for the truth; and that search “may lead to the experience of an ‘equivalent truth’ that ultimately rested on faith in the Cosmos but that by ‘engaging in it, man participates representatively in the divine drama of truth becoming luminous’” (252).

Voeglein’s discovery of historiogenesis – the mythical construct to account for the origin and cause of society and its order – forced him to revised his thesis of existential meaning unfolding on a timeline as described in the first three volumes of Order and History. Instead, meaning emerged “backward and forward and sideways,” where a “web of meaning” with distinct “nodal points” revealed “dominant lines of meaning” (299). These nodal points were 1) the advance from compact to differentiated consciousness distributed over a plurality of ethnic cultures; 2) the specific noetic and pneumatic differentiations of Hellas and Israel; 3) the ecumenic-imperial outbursts that created a new ecumenic society; 4) the reaction of ethnic cultures to imperial conquest; 5) and the imperial conquest as introducing the meaning of humanity beyond tribal and ethnic societies.

In the penultimate chapter, Cooper looks at volume five of Order and History and other later essays. From these works, Voegelin spoke about the universal idea of humanity, transcendence residing in a world-transcendent God, and a world that was common to all humans and exhibited an autonomous structure that was neither cosmic, divine, nor human. Voegelin also explored the structure of consciousness and its relationship to language. But what is perhaps most interesting in this chapter is Voegelin’s adoption of the meditative essay in his later writings where the process of seeking and being moved by experiences of truth was more important than analytically understanding the experiences themselves. The truth of existence was the not the conveyance of truth but the meditative articulation of one’s search for it.

The final chapter is to account for the anti-Christian charges levied against Voegelin, especially after the publication of the fourth volume of Order and History where the Resurrection was briefly mentioned and Paul was interpreted, as Voeglein’s critics claimed, as the equivalent of Plato. For Voegelin, the Resurrection and Pauline vision were acts rooted in the concrete experience of the soul – an experience of “profound longing of the individual for continuing life and the experience of God who draws the soul to himself and discloses himself to it in the theophanic event” (363). In this sense, Voegelin would agree with his critics that the Resurrection and Pauline vision were experientially equivalent to the “Egyptian pharaohs, Hellenic poets, Chinese mystics, Greek philosophers, and Israelite patriarchs . . . Jesus was a member of this series, a special one to be sure, but a member nonetheless, and he was followed directly by Paul, and then by other favored individuals in subsequent ages” (365).

Consciousness and Politics is a tour de force in Voegelin studies and should be required reading for anyone to understand the philosophy of Eric Voegelin. Barry Cooper has done a tremendous service in providing us an in-depth account of Voegelin’s philosophy and the historical context from which Voegelin’s works emerge. The book engages the secondary literature while not losing sight of its main aims and is accessible to read, even for those who are not familiar with Voegelin. We can only hope that Cooper continues his work on Voegelin so we all can benefit from it.