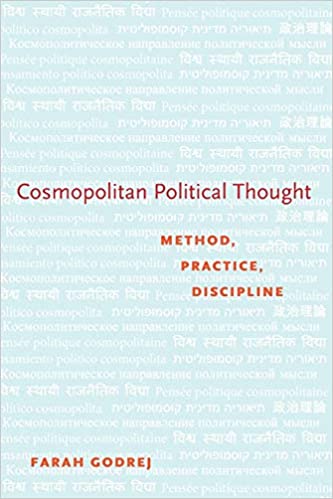 Comparative theory provides an engagement with non-western texts that is dialogical and hermeneutic where the theorist is reflective and ready to question the basic foundations of a his or her own claims. In Cosmopolitan Political Thought: Method, Practice, Discipline, Godrej adopts this approach to examine cosmopolitanism which is usually associated with western assumptions of individualism, egalitarianism, and universalism. Instead of defining an abstract idea and then applying to concrete cases, Godrej starts with specific, localized practices of cosmopolitanism from which a definition emerges. Specifically she looks at examples within Indian political thought, particularly on Gandhi’s political thought as it reinterprets the Vedic tradition.

As Godrej points out, western interpretive techniques are often insufficient to understand the ideas contained in the Vedic texts. Godrej calls for an approach of “existential immersion,” where the cosmopolitan theorist alternate between the internal immersion of lived experience of texts or ideas and an external viewpoint of commentary and exegesis, to shows how the concept of dharma (often translated as duty or moral law) is reinterpreted by Gandhi.

This radical self-dislocation allows the theorist to view texts polyvocally where creative interpretation of texts across time and space are seen as a necessary outcome of transcultural borrowing. The cosmopolitan theorist should try to preserve the holistic nature of the text of idea and allow it to travel as if it is replicated by a web of meaning (its context) within which is placed. Godrej uses Gandhi’s theory of nonviolence as an example of how ideas can be both positively and negatively be realized in different traditions.

What resources are of interest to the cosmopolitan theorist requires each tradition and its members to identify and assign values to its own intellectual resources. But even this can be problematic because it reifies “essentialist understandings” of a civilization and its resources rather than seeing them as fluid and adaptive. One wants to avoid ethnocentric references to one’s own practices while, at the same, reject any essentialist account of a civilization and its resources. Godrej proposes the techniques of genealogical investigation, internal investigations of power and dissent, and immersion within the practices of knowledge production to avoid these problems. By using these critical interventions, the cosmopolitan theorist avoids reproducing notions of what constitutes political theory and seeks out modes of intellectual production that displaces these preconceived ideas.