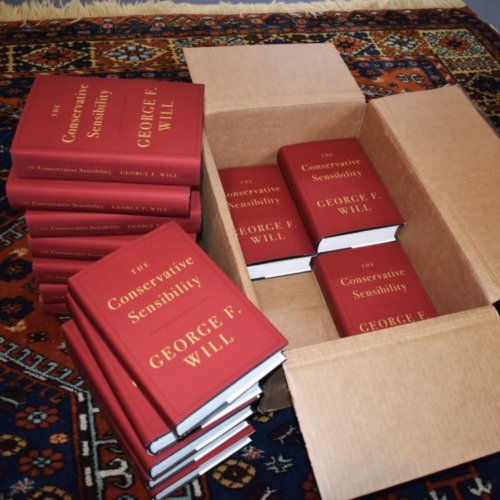 “We cannot escape the challenge of living by the exacting principles of our Founding, so we should beat on, boats against many modern currents, borne back, ceaselessly towards a still-useable past.”[1]

So ends George Will’s magnum opus, The Conservative Sensibility.  The above quote is, in fact, a summary of the book’s essential thesis.  For Will, the conservative is, at the core, one who believes in human nature and natural law.  Will acknowledges various forms of this political stance.  There is, for instance, European throne and altar conservatism.  However, what makes the American conservative unique is a central regard for the Constitution as the guiding star of political life.  The political philosophy of John Locke and, ultimately, the Ancient Greeks, Plato and Aristotle, are the nuclear reaction that keeps this star shining.  We see the light when we return to the enduring classical principles of America’s founding revolution.

The Conservative Sensibility comprehensively summarizes Will’s views on the executive, legislative and judicial branch of the American government.  He explores political economy, equality of opportunity, education and the politics of identity, foreign policy, and the relation between science and religion.  The Conservative Sensibility is a book about political philosophy and political agents.  The heroes are those who adhere to the classical political philosophy–the underlying philosophy of the Constitution’s Framers.  The villains are the progressive politicians who have been wooed by the Siren song of the even more insidious philosophers of history.

Will does not completely deny the quarrel between the ancients and the moderns.  Will recognizes, of course, that Locke embraced a philosophy of rational self-interest and held that virtue in the fullest sense could not be a basis for politics.  Nevertheless, like the ancients, Locke’s political philosophy rests on an understanding of natural law, rooted in human reason.  Political leaders like Jefferson, Hamilton and Madison simply put these ideas into practice.

This affirmation of natural right is the foundation of this longtime Conservative icon’s argument.  According to Will, if we reject natural law, then the American regime is without foundation.  Indeed, politics itself appears, for Will, to depend on the acceptance of the ancient view that the source of legal legitimacy rests in nature.

We first have our heroes.  Now, we have our villains.  If there is a light, there must be darkness.  The purveyors of darkness are the progressive politicians.  They have their own progressive philosophers, who provide the underlying justification for political change.

Will points to the Presidents who embraced progressive thought.  Woodrow Wilson denied the reality of natural right, natural law.  He embraced change.  For Wilson, the American order was, indeed, an expression of the movement and progress of history.  According to Will, Franklin Roosevelt’s New Deal deepened this progressive vision of American politics. Ostensibly, Dewey’s pragmatism provided the intellectual basis of practical politics.  Yet as every philosopher knows, pragmatists are just disguised Hegelians, American cousins of the German historicist and so relations of the infernal Karl Marx.  These vicious sophists have taught the progressive leaders that a bloated managerial state, guided by the true philosophy, will bring a shining future.    This is George Will’s nightmare.

There is no end to the evils that progressives have inflicted upon American society.  Will diligently chronicles their many sins.  He concludes that the power of the President today vastly exceeds that which the Framers intended.  That news is now devoted primarily to scrutinizing the tweets of a single man is a sign of how far things have gone off course.  Congress should be at the center of political influence and public preoccupation.  The bloated administrative state, governed by the presidential, executive power, fulfills functions the Framers never intended it to.  This is a direct result of the progressive politicians’ plan.  According to Will, the authors of the Constitution took measures to ensure that the presidency would not mutate into a tyranny.  Yet, the progressive politicians ignored this wisdom.  Wilson and Roosevelt discarded the former tradition, established by the Founders and Lincoln, resulting in, he points out, an extraordinary profusion of unnecessary and even harmful regulations.

Will has concerns with the state of the executive and legislative branches, but he is equally concerned with activist judges.  Influential judicial scholars have suggested that the Founders espoused no particular philosophy.  Will rejects this assessment as fancy.  He, instead, insists that political philosophy rests at the heart of jurisprudence because of the philosophical foundations of the American Constitution.

Judicial activism is a function of the tacit adoption of progressive philosophy.  Not only progressive judges like Elena Kagan but also even the supposedly conservative judges, like Antonin Scalia, have joined the bandwagon and denied that there is a philosophical basis of the constitution in natural law.  Will rejects this activism.  He instead encourages judicial restraint.

Will unambiguously endorses the arguments of Hayek in his treatment of political economy.  At a deeper level, however, his critique of big government draws from the Federalist Papers and the liberal intellectual sources of the constitution.  Yet for Will economic individualism in America antedates even the Revolution in the rejection of collectivism among original colonists.  This shift constitutes a revision of Will’s earlier views on economics, and Will recognizes this.  In Statecraft as Soulcraft, Will seems to have accepted the importance of the state.  In The Conservative Sensibility, Will alters his earlier views and accepts more fully the premise that the market is a moral force.  It is also a socializing and humanizing force.  When government interferes, it actually inhibits business owners from expressing the common integrity and decency that rests at the heart of commercial practice.  Perhaps he is attempting to appeal to young, conservative libertarians, but one laments here Will’s full embrace of capitalism as morality–a shift from an earlier view where government had a role in humanizing the market.

Treating the question of opportunity, Will is stalwart in emphasizing the roots of the American Constitution in individualism, rather than collectivism.  Government’s role is not, for Will, to provide for people but rather to give them a space in which they can provide for themselves.  In a word, although equality of opportunity is fundamental, one cannot expect there to be an equality of outcomes, ever, because talents differ and the show of initiative demands the agency of the individual.  Will is aware that equality of conditions is a complex question.  Still, robust democracies need a strong middle class.  However, the reader here must wonder how much inequality a healthy political order can itself withstand.

Will, the political philosopher, advocates the classical perspective in education no less than everywhere else.  Will maintains that the University is a locus of expertise.  The progressive idea that all opinions are valid and all values are equal is a repudiation of the very idea of education.  According to Will, students have to be elevated to appreciate the intellectual accomplishments of great thinkers and writers.  The denial of human nature and the belief that people are infinitely changeable is, for Will, a distorting doctrine that undermines the basis of political society. That we can reach an understanding that transcends place and time is, for Will, the very basis not only of education but of political life generally.

Will shifts his focus to foreign policy.  As with education, in the international realm, those progressives who view humans as infinitely malleable are in the wrong.  Humans cannot eliminate war.  Idealistic pacts and dreams of world peace have not and will never bring an end to the duty to defend ourselves from external aggressors.  Progressives predict that material forces themselves will lead us to eliminate the necessity of war.  This is a delusion, he proposes, because violence and war have always been and always will be part of human nature.  Calls for world peace are as fantastic as hopes of the afterlife in heaven.  Speaking of which, Will concludes with his treatment of religion.

Will is, surprisingly, most passionate when talking about religion.  He is, indeed, notable among conservatives in his adherence to a strict materialism and atheism.  He is a hero for conservatives who endorse fiscal responsibility, deride big government, respect the military, admire the constitution, lament identity politics but just don’t get God.  Madison, Jefferson, Franklin and Washington, though clearly not all convinced atheists, certainly lacked the robust Christian faith held by most Americans at the time.  Although the Founders regarded religion as socially salutary, Will argues that they created a unique space for the conservative form of atheism that Will himself exemplifies.  He also appeals to cosmology, Darwinian evolution and the history of science to defend an ultimate view of the randomness of our universe.  Yet he stops short of accepting Shakespeare’s nihilistic affirmation in Lear that life is a tale told by an idiot, signifying nothing.

This is perhaps the weakest link in Will’s argument.  One wonders if it is possible to reconcile a robust conception of traditional order and natural law with the proposition that the universe is ultimately random and therefore probably meaningless.  If there is purpose and order in the universe, then our lives clearly have meaning.  Once we understand that everything is ultimately senseless, there can really be no basis for the robust and sensible moral order Will so strongly advocates.

Like Aristophanes’ Socrates in the Clouds, Will affirms that the vortex is Zeus.  We are not children of God; we are atoms in a void.  In the same Aristophanic play, a Weaker argument, the argument for the new and innovative, defeats its personified companion, the Stronger argument, who holds to the venerable traditions and stands for the justice of Zeus. In all other things, Will stands with Aristophanes’ Stronger argument.  For Will, the key to a glorious future rests in the eternally shining treasures of our neglected and forgotten past.

The central strength of Will’s book is also its greatest weakness.  Will portrays a black and white world.  His heroes, the Founders and the classical tradition, are faultless.  The progressive thinkers and politicians have only ever done wrong.  This is rhetoric, and it at times borders on the kind of historical revisionism Will so dislikes in his progressive opponents. Nevertheless, Will’s gifts as a public debater and communicator make the book a great blend of political philosophy and public policy.  Even where disagreements might arise, Will is fully clear on the terms of the debate.  His decision to describe our choice between the conservative and progressive outlook as an all or nothing game certainly makes the stakes of politics clear.  In any event, that such an accessible and practical minded work on policy is so replete with the treasures of the rich tradition of Western political philosophy makes it a delight.

Conor Barry is an instructor in Political Science and Great Books at St. Thomas University in Canada. He is currently seeking to publish a book that exhibits the dramatic and philosophical connections linking Plato’s later and earlier dialogues. He has also published articles on the philosophy of religion and contemporary political thought.

Wisdom’s Workshop: The Rise of the Modern University