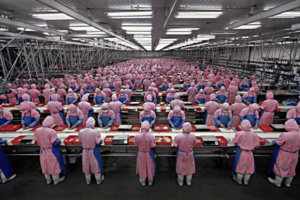 In Voegelin’s essay about industrial society, he explored how the American economy had adapted to ever-changing economic circumstances, with its technological productivity and rationalization of forms of production now being led by the service sector. The structure of American industrial society had been so transformed by the service sector such that marco-economic comparisons between the United States and the Soviet Union were defective (e.g., GNP, steel production) because these indices “express qualitatively diverse structures of economy and society” (CW 11, 209).[1] The structure of the economy, the basis of wealth, and the agents of productivity were so different between the United States and the Soviet Union that such comparisons were not only incompatible but meaningless.[2]

The transformation of the American economy to a service sector one was led by the entrepreneur who now has secured a place in society along with the old-style capitalist, the manager, the labor leader, the politician, intellectual leader, and the “wealthy person” whose inherited wealth allowed him or her to engage in political and social activity. These members were part of a web of mutual dependencies, creating new centers of initiatives in the economy, and were responsible for the functioning of it. In other words, for Voegelin the entrepreneurial function of the economy–those who seize social initiative in any form in the economy, whether labor leader, intellectual, politician, etc.–was the responsibility of all in the economy.[3]

An interdependent industrial society can only function as a democratic society when the various economic parties were not willing to demonize the others. But if the “psychology of demonization” were socially dominant, industrial society would be unstable to function as a democracy (CW 11, 213). Since industrial methods of production cannot be jettisoned, there would “the danger of a dictatorship of the right or the left” emerging in society (Ibid.). The government consequently has an explicit entrepreneurial function in maintaining “the rationality of economic processes for the common interest, by organizing and financing the needed adaptations and retraining programs” and should not exclude in concrete cases “large enterprises, entrepreneurial associations, and unions” from participating in this entrepreneurial function (CW 11, 215).

The United States industrial society functioned better than Germany because Americans have a better “clarity of awareness” where it was more widespread and socially effective in their society (CW 11, 216).[4] To understand “clarity of awareness,” Voegelin argued that one first must know how society’s economic order fitted within society’s spiritual order. This in turn required one to go back to the beginning sources of order in the West. For Voegelin, power, reason, and revelation from the time of Justinian were the sources of western order where the ruler had to defend society, administer the philosophical-rational order of law, and defend the revealed truth (CW 11, 217).

The great disturbances to this order emerged in modernity as four “anti-complexes.” The first was the Reformation’s anti-philosophical complex directed against the intellectual armature of Catholic theology and now manifested in the ideologies of progressivism, positivism, and Marxism (CW 11, 217-18). The second was the result of the sixteenth and seventeenth centuries’ war of religions: the anti-church complex with the demand that church and state should be separated, with the church’s role in addressing intellectual and social problems of the age prohibited. This in turn contributed to the third disturbance, the anti-Christian complex, as well as the anti-philosophical complex (CW 11, 218). The fourth complex was the anti-world complex that was peculiar to Germany with its Pietist’s withdrawal from the world so as not to be corrupted by it (CW 11, 218-19). Common to these anti-complexes was a lack of responsibility “to the duty to shape a life in this world”; for Voegelin, the “responsible living in the world, work is inescapable” (CW 11, 219).[5]

If cooperation was rejected in democratic society, then serious disturbances would occur in the economy which ultimately may lead to surrender of the economy to one entrepreneur (e.g., Communist Party, a fascist dictator). Instead of having many parties acting as entrepreneurs, society would be reorganized to one party controlling the entrepreneurial function of the entire economy. The awareness of this danger in the public in American society “is a living pathos of responsibility for the achievement of the experiment of a democratic, industrial society” (CW 11, 222). An industrial society can only function if all its members “understand how to cooperate, remain disciplined, and if each person tolerates and develops entrepreneurial initiative for the welfare of the democratic state in accordance with his own capacities” (CW 11, 223).

[2] Voegelin’s criticism of comparing American and Soviet GNP raised the question of how to make proper comparisons between countries. This problem is later analyzed in Giovanni Sartori, “Concept Misinformation in Comparative Politics,” American Political Science Review 64.4 (1970): 1033-53 and “Comparing and Miscomparing,” Journal of Theoretical Politics 33.3 (1991): 243-57.

[4] Voegelin’s concept of “clarity of awareness” is when noetic rationality had penetrated into the masses of society so that it is socially effective. It is similar to social capital where citizens learn both in theory and practice the habits of democratic life.