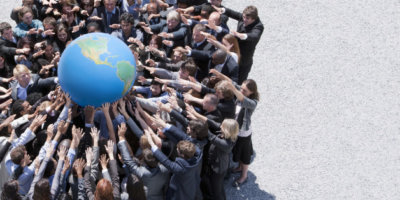 In his 1960 essay, “Industrial Society in Search of Reason,” Voegelin described the features of industrial society as follows: 1) the worker was separated from his tools by technology; 2) the worker no longer produced anything by him- or herself or in small groups; 3) the socialization of work was organized around a complex of raw material and technologies because production transpired at a large scale; with 4) the result was an increasingly interdependence of member of society; where 5) everyone was dependent on the smooth functioning of organization; and 6) the “assurance of an annual increase in productivity as soon as the organization has attained the sector of technical research” (CW 11, 178). These features of industrial society determined the optimum size of society, with the United States and the Soviet Union fulfilling these requirements and European states being too small. Repeating what he had said in his earlier essay, Voegelin warned that if these European states wish to survive as a matter of “power politics,” they need to form a federative union to compete with America and the Soviet Union.

Because of the pragmatic rationality of industrial society, the legitimacy of ideology had become diminished because there was a basic agreement on questions of social organization. However, there were still questions to be addressed regarding the organization of mass society: 1) who should own the instruments of production; 2) whether planning should be carried out by private companies or the government; and 3) the role of economic class status in society. In addressing these questions, Voegelin compared the Soviet Union with the West as two possible models. The Soviet model was the creation of an industrial society to compete with the West with the state owning the instruments of production and planning accordingly. With its immanentist eschatological ideology, the Communist Party did not represent the proletariat but was really a sectarian community that imposed its despotic rule on people. The question for the Soviet Union was how long would its irrational ideology be able to resist the growing pressures of pragmatic rationality as it developed its economy (CW 11, 179-80).[1]

By contrast, the West had favored a mixture of private and public ownership of the instruments of production and planning the economy with citizens supported by a welfare state and labor productivity.[2] However, the problem that confronted the West was similar to the Soviet Union in providing a civil theology for its citizens. Throughout its history, the West had adopted several different models–the Gelasian system, the minimum dogma, the state cult, and civil government–before settling on constitutional democracy where the constitution had become an article of faith in society (CW 11, 182-83). If this condition were fulfilled, society could become pluralistic with various intellectual and spiritual movements coexisting without subverting the constitutional order.[3]

Voegelin’s assumptions here were that humans can participate in the life of reason (logos or transcendent nous); that this participation influenced their characters; and that the life of reason was potentially available to all but “empirically (for whatever reason) they are unequal in the actualization of their potentiality” (CW 11, 180).[4] Thus, only a few humans were capable of an optimum actualization in the life of reason, with the result that society was a de facto hierarchical structure in terms of actualizing this life. Society consequently was defined by the degree to which the life of reason was “actively carried out by a minority of its members” and was a socially effective force throughout society (CW 11, 181).

Although all societies were elite-driven for Voegelin, he preferred constitutional democracy over the Soviet model as emblematic of the “good society.” The “good society” was 1) “large enough and wealthy enough to make the life of reason possible, at least for the minority capable of putting this human potentiality to work”; and 2) “organized in such a way that the life of reason becomes a social force in a society’s culture, including its political affairs” (CW 11, 183). However, the good society was not an eschatological goal but an achievement that was subject to decline and fall. It was incompatible with the utopian visions of modern ideologues.

In discussing the “good society,” Voegelin also revisited the problem of size with classical thinkers preferring a small community and moderns a large one. But with technology, industrial society became possible, along with the developments of representative government, federalism, and–due to Christianity–civil society: “the meaning of human existence is no longer circumscribed by its expression in political life” (CW 11, 184). Furthermore, the universal acceptance of a certain material standard of living, only possible in a mass industrial society, continued to make the problem of size a relevant one, whether organizing one’s own society or how societies interact with one another at the international level.

This raised a series of questions that Voegelin asked about the relationship between western and non-western civilizations: Was the impact of the West on non-western civilization positive and progressive or one of suffering and disaster? Was rapid industrialization copied from the West always the best way to achieve the “good society”? Should non-western civilizations develop their own indigenous institutions to compete with the West? Although Voegelin left these questions unanswered, he clearly believed that certain historical and cultural requirements were necessary before a society could become a western-style constitutional democracy.

Besides the problems of size and viability, Voegelin wrote about the life of reason as a third component for the “good society.” Voegelin began his discussion of the life of reason by dividing it into pragmatic and noetic: the former was concerned with the rational actions in the sciences of the external world, such as technology and coordinating means and ends; the latter was the rational action “in the sciences of man, society, and history” that provided existential meaning for both the individual and society as a whole (CW 11, 188). The two types of rational action were relatively independent of each other, so that a society could be pragmatically rational but noetically irrational.[6]

For Voegelin rational noetic debate was difficult at the international level, especially among different civilizations. First, in some civilizations, like India and China, the life of reason was still part of cosmological myth, whereas in the West the life of reason had become extricated from myth. Even if there were leaders capable of carrying on a rational discussion in the western sense of the term, the masses still believed in the world of myth. This in turn raised pragmatic difficulties, such as persuading a population who still live in the world of myth of rational ways of organization and administration (e.g., habits of diets should be modified, the caste system should be eliminated) (CW 11, 188-89).[7]

Second, the West had developed ideologies that denied participation in the life of the transcendent reason. The result was that rational discussion was impossible whether with ideologues in the West, Communists in the Soviet Union, or non-European university students who have been indoctrinated in a “strange cocktail of Rousseau-Marx-John Dewey” (CW 11, 189). Ideologues may not be able to destroy the life of noetic reason but the damage inflicted was serious and would take at least a generation for noetic reason to become visible and persuasive again. But even if this were possible, Voegelin warned that the dissemination of such knowledge on a massive scale, whether by the media or academic organizations, to non-western civilizations “may do more harm than good” (CW 11, 190). Unlike the ideologue, the person with noetic reason possessed a humility about what one would say and do and what effect it may have in society. For Voegelin, one may know the life of reason and the good society–and try to cultivate them–but “that is all one can do; whether or not this offer is accepted depends on the Spirit that blows where It pleases” (Ibid.).

As all societies began to transform themselves under the pragmatic reason of industrial society, the question was whether they, as in the West, would rediscover the life of noetic reason in an age of ideology; or, in the Soviet Union case, continue to have an irrational ideology counter the rationality of industrialization; or, finally with non-western societies, see whether the rationality of industrialization was compatible with the world of myth among the many and western-ideological thinking in the elites.

The demise of the Soviet Union in 1991 confirms Voegelin’s prediction that Soviet ideology would eventually collapse when confronted with the pragmatic rationality of industrial society. However, it was Gorbachev’s political decision to end Soviet rule. The pragmatic rationality of economics played a vital role in the collapse of the Soviet Union but it was one factor among many (e.g., ethnic nationalist movements in Soviet republics, the United States willing to negotiate). Economic rationality ultimately was subordinate to political decisions. Chris Miller, The Struggle to Save the Soviet Economy: Mikhail Gorbachev and the Collapse of the USSR (Chapel Hill: University of North Carolina Press, 2016).

[2] This continues to be the case today in the West, even after the neoliberal revolution of the 1980s and globalization of the 1990s. Western states may vary in the degree of welfare support and labor productivity in their economies but none of them have either nationalized their economies like Venezuela or adopted wholescale laissez-faire capitalism.

[3] For more about this civil theology, refer to Ellis Sandoz, The Roots of Liberty: Magna Carta, Ancient Constitution, and the Anglo-American Tradition of the Rule of Law (Columbia, MO: University of Missouri Press, 1993) and A Government of Laws: Political Theory, Religion, and the American Founding (Columbia, MO: University of Missouri Press, 1990).

[4] These assumptions are explicated in Eric Voegelin, Modernity Without Restraint: The Political Religions; The New Science of Politics; and Science, Politics, and Gnosticism (The Collected Works of Eric Voegelin Volume 5), Manfred Henningsen, ed. (Columbia, MO: University of Missouri Press, 2000), 109-48.