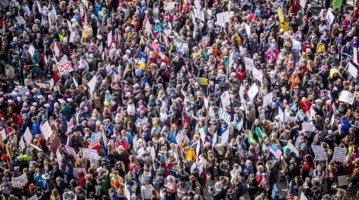 Voegelin’s essay, “Democracy in the New Europe” (1959), was written in a period of transition in Eric Voegelin’s career, having left Louisiana State University in the United States to Ludwig Maximilian University in Germany.[1] Already having published his best-known works–The New Science of Politics (1952) and Order and History Volumes 1-3 (1956-57)–Voegelin was working on his mature theory of consciousness, later to be published as Anamnesis (1966), and his revised account of history, which would be published in Order and History Volume 4 (1974). But during this period he also was preoccupied with pragmatic subjects, too. Relocated to Germany, at the heart of the European Cold War theater, Voegelin was concerned whether Europe could transition from an illiberal and ideological society to a liberal democratic one.[2]

In Autobiographical Reflections, Voegelin remarked that “The motivations of my work, which culminates in a philosophy of history, are simple. They arise from the political situation” (CW 34, 118). The Cold War competition between the United States and the Soviet Union, the unsteady recovery of Europe as liberal democracies, and the deficiencies in the social sciences to analyze contemporary events was the political context–and motivation–for Voegelin to write this essay.[3] Clear thinking was required to understand these events.

Voegelin’s work during this period therefore reflects a more pragmatic direction in both his teaching and research. In this essay, “Democracy in the New Europe,” Voegelin explored whether Europe could be a continental power like the United States and the Soviet Union. Voegelin was concerned with the political science problem of size, political culture, and economics: whether democracy and industrial society could exist in mass society other than in the United States.

At the inauguration of the Bavarian Academy for Political Education, a bipartisan and publicly supported institution for scholarship and teaching in civic education in Munich, Voegelin delivered his lecture which was later published as “Democracy in the New Europe.” In this essay Voegelin raised the question how freedom and democracy could be preserved after the adoption of a liberal democratic constitution. Citizens must possess a character that “is a state of daily, well-exercised, and habitual vigilance and discipline in the fundamental questions of political life” (CW 11, 59). In other words, democracy can exist only “when civic virtue exists” (CW 11, 60). Unlike ideology, civic virtue was the proper social basis for all political action and required a “sound knowledge of the principles of social coexistence among free men in a free society” (Ibid.).

For Voeglein, these principles of social coexistence were not discovered in contemporary political science but in the Judeo-Christian and democratic traditions of the West. In tracing the genealogy of the phrase, “government of the people, by the people, for the people,” Voegelin showed how these remarks in Lincoln’s Gettysburg Address were from the prologue of John Wycliffe’s 1384 Bible translation: “This Bible is for the Government of the people, by the people, and for the people.” It was neither cultural maturity nor ethnic citizenship that determined whether a people could govern themselves but one “that experienced its birth under God” and, if needed, necessitated a rebirth to be able to govern (CW 11, 61). According to Voegelin, the English reformers of the fourteenth to the eighteen centuries achieved democratization when they modeled their national society after the Christian community.[4]

However, this attempt to transform the Christian community into a national one erased the distinction between spiritual and secular authority. The reformers, for example, were inspired by the theopolity of Israel and sough to make Mosaic law the civic law of England instead of common law. This conflict between the reformers and the establishment led to emigrations, civil war, and the persecutions of the seventeenth century. From these struggles emerged the idea of civil government: a national community of Christians who should not make:

“. . . ecclesiastical-organizational and dogmatic differences the object of political struggles and that there would be a specific civil sphere of life to which political authority is limited by its legal organization. It is such civil government that we call democracy” (CW 11, 62).

But what were the functions and conditions of this civil government? For Voegelin, the function of the civil government was to protect the life, freedom, and property of its citizens by civil and criminal law and protection of society against external enemies. Civil government was to refrain from the “life-spheres of reason and of spirit”: the freedom of thought and discussion (“the life-sphere of reason”) and the freedom of belief and consciousness (“the life-sphere of the spirit”). But this separation of the political (civil government) and nonpolitical (reason and the spirit) was possible only if citizens did not tolerate any group that sought to take advantage of the authority of the state to impose their ideas and belief upon their fellow citizens. Democracy therefore was only tolerant to “those who are willing to submit to the conditions of civil government” (CW 11, 62).

To those whom democracy should be intolerant depended upon historical circumstances for Voegelin: Catholics and Puritans in seventeenth-century England; National Socialists and Communist in twentieth-century Germany. Voeglein spoke approvingly of the American electoral college and the de Gaulle constitution where anti-democratic parties were minimalized because these election laws served to strengthen and stabilize democracies rather than disrupt them, as were the cases in Weimar Germany and the First Austrian Republic Voegelin faulted the democratic parties of the 1920s for their lack of knowledge and resoluteness in allowing anti-democratic parties on the left and the right to participate in Germany and Austria. For Voegelin, it would have been better for these democratic parties to engage in a civil war with their anti-democratic foes rather than have National Socialism triumph and trigger World War II (CW 11, 63-64).

The idea of civil government in theory and constitutional practice was created in England and America and, during the nineteenth century, became the model for continental European countries to emulate.[5] The challenge during Voegelin’s time was “activating democracy for the organization of Europe” (CW 11, 65). The “federative joining” of the European states system had become a necessity because “the scale of societies necessary for an independent, free existence has changed significantly” (Ibid.). Although democracy developed within the nation state, it must adapt to a new form, as “the time for the Western nation states has run out” (Ibid.). For Voegelin, civil government was the only possible way forward for a federative Europe, as the past imperial attempts of Napoleon and Hitler had failed. With the backing of American military and economic power, Europe has a chance to establish a federative Europe as civil government, an opportunity that may not come again (CW 11, 66).[6]

The transformation of the agrarian order to industrial society raised this problem of size for civil government: the optimal utilization of industrial technology required a society a certain size of territory and population. As Voegelin put it, “A modern economic constitution necessitates the size of the American or Russian society. A European society would also belong to this scale” (CW 11, 67). European states were too small to develop the “state of technological development” to match the power of the Soviet Union or the United States.[7]

Although this was a harsh reality that Europeans must confront, it also potentially has a positive prospect for democracy. For a civil government to be a permanent and stable government, it must have free and independent people, which included an economic basis that allowed sufficient freedom of movement, thought, and education to participate in democratic life. Contrary to Marx’s predictions of class warfare, the United States had experienced material security for all its citizens first through social welfare legislation and later through labor productivity through technological development. This standard of living was so high and secured that class warfare faded away as a political possibility (CW 11, 67-68).[8]

What had transpired in America was possible in Europe if Europeans were willing to adapt to the conditions of a large-scale industrial society, including the closing of unproductive sectors of the economy for more productive ones and allowing unemployment that would accompany it (CW 11, 69). Critical for this project to succeed was that Europeans themselves must be educated in economic skills of mobility and adaptability as well as in democracy. Civic education therefore was to teach the younger generation not only democratic ideas of limited government but also the economic skills needed for a unified European market and state to succeed.

[5] This idea had been recently re-explored in Kevin Narizny, “Anglo-American Primacy and the Global Spread of Democracy: An International Genealogy,” World Politics 64:2 (2012): 341-73.

[8] However, this is no longer the case today in the United States where wages have been stagnant for the past forty years in spite of increases in labor productivity, another factor that partially explains the present polarization in American politics. Tyler Cowan, Average Is Over: Powering America Beyond the Age of the Great Stagnation (New York: Dutton, 2013); Nolan McCarty, Keith T. Poole, and Howard Rosenthal, Polarized America: The Dance of Ideology and Unequal Riches (Cambridge, MA: MIT Press, 2016); Ganesh Sitaraman, The Crisis of Middle-Class Constitutionalism (New York: Knopf, 2017).