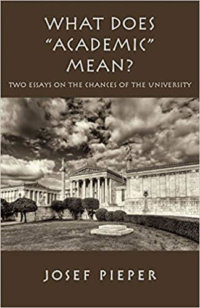 What Does Academic Mean? Two Essays on the Chances of the University. Josef Pieper. South Bend, IN: St. Augustine’s Press.

This short book includes an excellent introduction by James V. Schall and, for the first time in English, two lectures that Josef Pieper presented in Germany after World War II. In these two lectures, Pieper argues that the university is more than an economic, cultural, or political institution but a place where the highest things can be known through serious reflection. It is a place where everything and anything can be discussed and be known as true or false; a place where humans can be open to reality and confront it as it actually is, as opposed to how they might want it to be; and a place where the condition of the souls of its faculty and students are attuned with the world as it reveals itself to them. It is this contemplation of the truth of things and their origins that provides the existential bond between faculty and students that we call the university.

The first lecture – “What Does ‘Academic’ Mean?” – looks back at the origins of the university to Plato’s Academy, a name that was derived from the school’s proximity to a grove of Akádemos (olive trees). Despite the pedestrian origins of this name, Plato’s Academy has continuously been understood as the basic model for all subsequent universities. Thus, “academic” refers not only to a historical account of the university but also to a philosophical or theoretical way of looking at the world: a way of looking that attempts to see it as it truly is and to tell the truth about it.

But what does it mean to aim for truth in an academic sense? For Pieper, truth, in the highest sense, is a form of theoretical instead of practical knowledge that we receive receptively rather than actively. This orientation towards truth creates a type of freedom for the individual, freed from utilitarian concerns, and is at the heart of what we call “academic.” And for Pieper, this freedom can be protected only if “it puts itself under the protection of the gods,” the creation of a sacred space where the value of contemplating the truth is revered, unquestioned, and shielded from the world of practicality.

One of the great threats to this understanding of academic is the world of practicality, the “worker model” of the university where the sophist rather than the philosopher can flourish. The sophist, contradicting himself, denies that truth can be known but also claims to know everything. He specializes in any discipline, acts as an aesthetic, paving the way for the world of practicality to pervade in the university. Instead of revering reality and accepting its mystery as does the philosopher, the sophist transforms the philosophical act into one without limits, thereby destroying genuine theoretical knowledge and with it the university.

The philosopher consequently is separated from the many, as only a few are able to contemplate truth. However, for Pieper this neither translates into a social exclusion of the philosopher nor an elitist attitude towards the many, for the “crowd” is the not the same as the ordinary. It is necessary for the philosopher to maintain contact with the everyday reality of the many, for truth manifests itself in a myriad of ways. In fact, one of the philosopher’s task for Pieper is to help the many see for themselves that they are spiritual beings and should appreciate the unsatisfactory nature of their existence. This educative task is what we call the university.

The second part of the book – “Openness for the Totality of Things” – continues the same themes from the first lecture about philosophy and the university. Pieper begins by pointing out that institutions like the university are fundamentally about the experiences behind them, experiences that are mysterious but also are linked to the past. The university today therefore is not merely a social, economic, or political institution but a collective experience of people trying to discover truth, an attempt that makes them part of a tradition of learning that started in Plato’s Academy.

For Pieper, the truly educated person is one who knows his or her relationship to the world as a whole, however imperfect such knowledge may be. The desire to understand the whole or the totality of reality is what distinguishes the ambition of the university from other types of ambition and thinking: to try to understand the whole of reality by being open to how it reveals itself to you. This search is not only a philosophical enterprise but also a scientific one. Science too sheds light on what was hitherto unknown, making advances in our knowledge of the world and teaching us to think objectively, disinterestedly, and rationally. But science by itself is unable to comprehend the whole of reality, especially its theological aspects, and consequently is only a stepping stone to philosophical thinking

Pieper concludes with the notion that disputatio, conversation about fundamental questions of human nature and reality, needs to be reclaimed by students and faculty in order to renew the university. Instead of specialists exchanging opinions about esoteric topics, faculty and students should converse about the “totality of things,” the whole of reality, to provide themselves with an image of the world. This should be the benchmark to evaluate the university and whether criticism of higher education is meaningful: are students, faculty, and others talking about the most important things of human existence? How is the knowledge of particular disciplines related to our understanding of the whole of reality and our place within it? And how can these disciplines converse within one another to uncover these answers?

This book is a useful reminder of the university’s origins, development, and what it could be again. It provides us with a paradigm that, should we agree with Pieper, we can aspire to and pray for. Although higher education has never been more accessible to people than it is today, real universities in Pieper’s sense are more difficult to find. With Pieper’s account, we are given at least one possibility of what a university should be and a measure to guide us in our choices of where to study, work, and learn.

Liberal Education, Civic Education, and the Canadian Regime: Past Principles and Present Challenges

Hitler’s Monsters: A Supernatural History of the Third Reich

The Collapse of Christian America