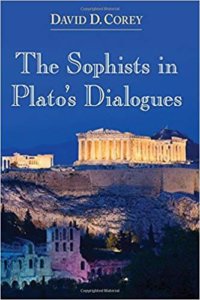 David D. Corey’s The Sophists in Plato’s Dialogues examines the sophists portrayed in Plato’s dialogues to illuminate their relationship to Socrates and thereby demonstrate what is distinctive about Platonic philosophy. The book consists of eight chapters (an introduction and seven chapters), an appendix that analyzes Hesiod’s Myth of Prometheus, and a bibliography. It makes a significant contribution not only to our understanding of the sophists but also to Platonic philosophy itself.

The book makes three specific claims: 1) the sophists are different from rhetoricians in that the former teach arete (excellence or virtue) while the latter do not; 2) the sophists partake in the same philosophical enterprise as Socrates by teaching arete and techniques of argumentation as well as sharing the same epistemology; and 3) Plato emphasizes the similarities between Socrates and the sophists because both prepare students for philosophical inquiry (propaedeutic) and philosophical practice (protreptic).

Corey adopts the literary and philosophical approach to Plato’s dialogues that recognizes that the characters are psychological types rather than mouthpieces of particular doctrines; the arguments contain obstacles that require a careful reading to decipher their true meaning; and the dramatic features of the dialogue leads the reader to a deeper interpretation of them. So far, this revolution in understanding Plato’s dialogues has focused on Plato’s own thinking and purposes, neglecting important characters like the sophists. The Sophists in Plato’s Dialogues remedies this deficiency in the scholarship and contributes to our greater understanding of Plato and his relationship to them.

Chapter two examines the various definitions and characterizations of sophists in Plato’s dialogues. Corey shows that Plato uses the word sophists for those who claim to teach arete and who charge a fee. Corey therefore distinguishes sophists (Protagoras, Prodicus, Hippias, Euthydemus, and Dionysodorus) from rhetoricians (Thrasymachus, Gorgias, Polus, and Callicles), a distinction that has not been previously made by scholars and further contributes to our understanding of Plato’s dialogues and philosophy.

The relationship between Socrates and the sophists and its significance is illuminated in the following chapters of the book, with each chapter focused on a specific sophist. Chapter three looks at Protagoras from the self-named dialogue, with attention to his Great Speech that attempts to demonstrate virtue can be taught. Corey’s examination of this speech reveals that both Socrates and Protagoras use similar techniques of myth, accounts of the city, and artful speaking (giving different messages to different audiences in the same speech), but that Protagoras remains in the world of appearances for virtue (safety, stability, one’s reputation) while Socrates continues to search for some knowledge beyond it.

Chapter four studies Prodicus, as he appears in several Platonic dialogues, with Corey focusing on the Protagoras and Theaetetus. He shows what Socrates learned from Prodicus’ understanding of diairesis (distinction-making) for philosophical purposes, particularly in combating eristics. Unlike Prodicus, who uses diairesis to expand the number of distinctions made in the world, Socrates sought to reduce the number of distinctions until one reaches the unity of the Form of the Good.

Chapter five analyzes Hippias in Hippias Minor. Corey examines the theme of polytropia (versatility) to show how Hippias serves as a valuable touchstone for evaluating Socrates’ own polytropic tendencies. In this dialogue Socrates appears to resemble the sophists, but his self-awareness of his polytropic tendencies and his ability to marshal them in the service of philosophy makes him different from Hippias. However, Socrates presents two forms of philosophical arete – moral goodness, on the one hand, and competence and power, on the other – that are not necessarily compatible with each other. By not resolving this incompatibility, the dialogue prepares the reader for philosophical inquiry (propaedeutic).

Chapters six compares and contrasts Socrates’ and the sophists’ preparation for students for philosophical inquiry (propaedeutic) and philosophical practice (protreptic). In the Euthydemus, Socrates’ practice of protreptic for Crito ultimately fails, with Crito failing to distinguish philosophy from eristics. Crito’s failure is interpreted as a foreshadowing of the outcome of Socrates’ own trial, with one of Socrates’ closet friends not being able to distinguish sufficiently between Socrates and the sophists.

Chapter seven returns to Protagoras as portrayed in the Theaetetus and his importance as a means of advancing Socrates’ pedagogical and philosophical goals. Protagoras exposes people to the notion of the relativity of human experiences by making the weaker argument stronger, which awakens in Socrates and his students a search to find permanence in reality. Students must be able to explain the instability of phenomena in everyday experiences and, unlike Protagoras who is content in the world of relativity, discover a unity of the various levels of being. Socrates therefore incorporates Protagoras into his own philosophy by asking students to respond to it.

Chapter eight treats the sophists in the Meno, Gorgias, Republic, and Sophist as corrupters of youth, slaves to conventional virtue, flatterers devoted to pleasure, and misologist makers of images and imitations. For Socrates, the sophists serve a pedagogical purpose in awakening in his students a philosophical wonder that is prompted by the sophists’ questioning. Thus, the sophists are not to be feared by Socrates but rather engaged to serve his pedagogical and philosophical ends.

Surprisingly the book neglects Christopher W. Tindale’s Reason’s Dark Champions: Constructive Strategies of Sophistic Argument (University of South Carolina Press, 2010), a work that challenges Plato’s and Aristotle’s portrayals of the sophists. In his book, Tindale argues it was in Plato’s interest to present the sophists as accurately as possible in order to dismiss their positions entirely. Although Tindale favors the sophists over Socrates, whereas Corey’s position is contrary and also more nuanced, Reason’s Dark Champions shows the similarities in philosophical techniques and methods between the sophists and Socrates.

In spite of this minor criticism, the book makes a significant contribution to the scholarship of Platonic philosophy. Instead of being a group of opponents or straw men, the sophists play a critical role in Socrates’ pedagogical and philosophical task of generating wonder in his students so they are prompted to search for truth beyond a world of unstable physical and intellectual appearances. For those looking for a nuanced and original account of Socrates, The Sophists in Plato’s Dialogue is a book worth reading.