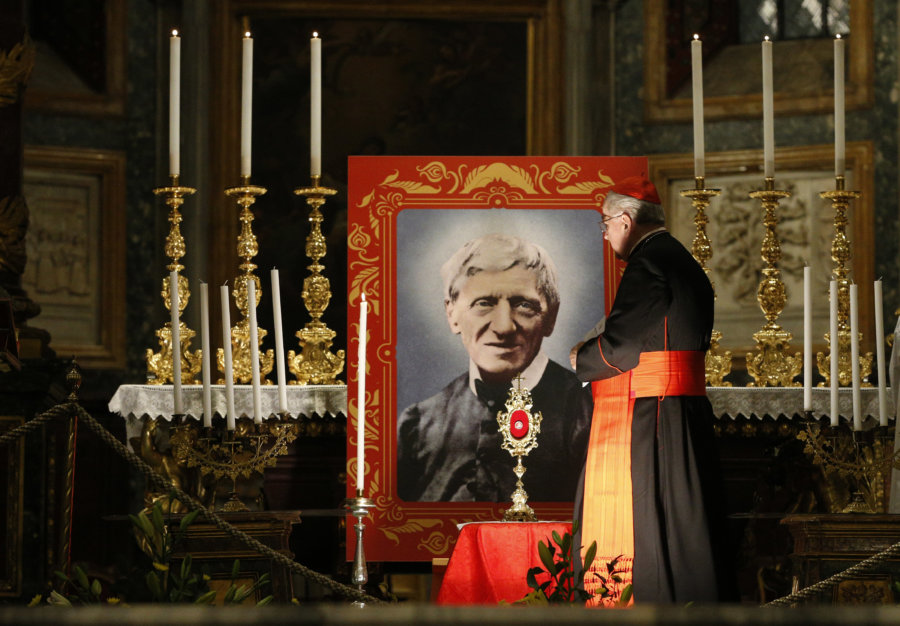 One might not think of the newly-canonized Catholic Saint John Henry Newman as a patron of businessmen or investment bankers. After all, in “Christ the Quickening Spirit,” a sermon from his Anglican days, he gave his own version of Romans 8:39, telling us that nothing can separate us from the love of God, including trials, temptations, times of tribulation, pain, bereavement, anxiety, sorrow, poverty, and insults. Squeezed into this list right after tribulation and before pain and the rest is, significantly, “time of wealth.” An 1829 poem has the speaker request of God, “Deny me wealth.”

What he said as an Anglican he also said as a Catholic. An 1848 sermon (three years after becoming a Catholic) laments “the rich” who are “engrossed with the wish to make their wealth greater, and the pursuit of wealth blocks up the avenues to their hearts, and they have neither time, nor thought, nor love for the great things which concern their peace. What is all this but another possession of the devil. . . ?”

What would you expect from a man who had memorized large chunks of the Bible as a young man and had the words of Jesus, the Apostles, and the Prophets about the dangers of wealth as an idol constantly echoing in his head? Never mind Aristotle (about whom Newman said that in most matters to think correctly is to think like him) and other philosophers who warned about the ways in which investing in earthly treasure was no way to flourish.

But Saint John Henry Newman is a source of wisdom because he always stresses both sides of any truth. And though he always warned against the idol of wealth, he never said that it was evil in and of itself, nor did he say it was never acceptable to pursue it. Newman actually possessed and read a number of volumes of economics, then usually labeled political economy, by David Ricardo, Thomas Malthus, and Nassau Senior. Though his study of this discipline seems to have been limited to his earlier years, he did not turn from it out of moral horror. When Newman discussed political economy in the fourth discourse of The Idea of a University he not only defended its place in the circle of knowledge, he defined it as “the science, I suppose, of wealth,—a science simply lawful and useful, for it is no sin to make money, any more than it is a sin to seek honour.”

Nor was this position merely theoretical. Political economist and theologian Paul Oslington observed that a “good test of Newman’s attitude toward political economy” is his approach to the subject as Rector of the Catholic University of Ireland. One of the first professors Newman hired was John O’Hagan, a political economist, whose independence from “clerical interference” Newman “vigorously defended.” Newman defended not only the political economist but a very particular take on political economy in one letter about the Catholic University of Dublin, explaining that as long as it is not a question of the authority based on “ecclesiastical principle and enjoined by a sacred sanction,” in secular matters “it is but an acquiescence in the custom of our country and the traditions of the day to adopt private judgment and free trade for our watchwords, and to denounce monopolies.” Indeed, Newman could sound like a Manchester Radical, or at least an emissary of Lady Thatcher, at times, as in his anonymously-written newspaper essays on political theory in the context of the Crimean War, later published together as Who’s to Blame?

“This, then, is the people for private enterprise; and of private enterprise alone have I been speaking all along. What a place is London in its extent, its complexity, its myriads of dwellings, its subterraneous works! It is the production, for the most part, of individual enterprise. Waterloo Bridge was the greatest architectural achievement of the generation before this; it was built by shares. New regions, with streets of palaces and shops innumerable, each shop a sort of shrine or temple of this or that trade, and each a treasure-house of its own merchandize, grow silently into existence, the creation of private spirit and speculation. The gigantic system of railroads rises and asks for its legal status: prudent statesmen decide that it must be left to private companies, to the exclusion of Government. Trade is to be encouraged: the best encouragement is, that it should be free. A famine threatens; one thing must be avoided,—any meddling on the part of Government with the export and import of provisions.”

How did Newman reconcile these two facets of his views? One can suggest two points. First, Newman understood that though not all businesses are offering goods and services that are useful or innocent, many of them are—and their success not only benefits others; it is built on patterns of behavior that are at least innocent and often partake in the good. Though gains can be ill-gotten, they are quite often the result of a life of virtue. In 1859, while editor of the liberal Catholic magazine The Rambler, he argued in the correspondence section of one issue that “temporal prosperity” is a “note” of the Church (one of the signs of her truth). Though many deny it, he says St. Robert Bellarmine seemed to teach it.

“Such a doctrine certainly does come home to our common sense. Religion may preach poverty to the saint, but it teaches worldly success and the comforts of life to the faithful at large. It is the foster-parent, if not the natural mother, of industry, thriftiness, order, honesty, and equitable dealing; and these virtues are the infallible antecedents of making money, gaining a character, and rising in society. I cannot see the flaw in this argument; and when Protestants urge it, I cannot answer them.”

Second, however, though Newman never denied that wealth and its pursuit was dangerous, he was never under the impression that it was the only dangerous thing that fallible men pursued. In fact, one of the most dangerous was learning itself. In an 1860 letter to the ultramontanist Catholic convert and editor W.G. Ward, Newman outlined the problems accruing to the pursuit of knowledge—explicitly comparing the wealthy to both those in authority and the scholarly.

9. that, as the rich man, or the man in authority, has his serious difficulties in going to heaven, so also has the learned.

10. that the more a man is educated, whether in theology or secular science, the holier he needs to be, if he would be saved.

11. that devotion and self-rule are worth all the intellectual cultivation in the world.

12. that, in the case of most men, literature and science and the habits they create, so far from ensuring these highest gifts, indispose the mind toward their acquisition.

Those who flee from economics, wealth, and free enterprise on principle because of their spiritual dangers ought equally to flee from education, learning, and of course any political or civic leadership.

Of course those who do would be consistent, but they would not be wise. The saints are those, Chesterton observed, who serve as the antidote to their ages. Saint John Henry Newman wished people to flee from the love of money, but he didn’t wish them to stop making it. He wished them to flee similarly from love of erudition for its own sake, but he didn’t want them to stop loving the Lord with mind as well as heart, soul, and strength. He saw the fatal dangers in being too earthly-minded to seek the goods of heaven. He also saw the perhaps less serious, but no less real, dangers in becoming too (falsely) heavenly minded to do any earthly good. Economic activity is not the end-all nor the be-all of life. While defending its place in the circle of real knowledge in Idea of a University, he denied that political economy was “a panacea for vice, malevolence, and misery.”

But that earthly good we do with the material things of this world, when offered up in love, becomes a fit sacrifice. Economic activity, properly ordered and done for love of God, is in the end a sacramental affair.

This was originally published with the same title in The Imaginative Conservative on October 12, 2019.

Tennyson’s Poetry of Departure and the Heart: Posthumous Mind and the Limit Case in Ulysses, Tithonus, The passing of Arthur, and Crossing the Bar

Truth as a Democratic Project