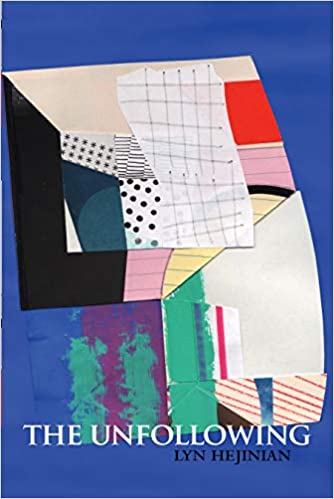 Sonnets have traditionally borrowed from the language of logic and law, presenting arguments in favor of and against various positions, counterbalancing pro and con, presenting and rationally evaluating evidence, and finally (at least often) reaching some kind of dialectical resolution or clarification. In her 2016 collection of sonnets entitled The Unfollowing, Lyn Hejinian turns this tradition on its head: she constrains herself to write only in non sequiturs, without discursive continuity or logic. As she puts it in the preface to the book,

“Nothing was to follow—or nothing follow logically. I wanted each line to be as difficult to accept on the basis of the previous and subsequent lines as death is for we who are alive—a comparison that I make intentionally, since my intention in writing the sequence of poems I’m calling ‘The Unfollowing’ was to compose a set of elegies.

The initial occasion for mourning was a personal one, the death, from cancer, of a young member of my immediate family. That death overturned whatever ‘logic’ I had trusted to prevail over the larger patterns of the familiar world and over details and particulars through which we experience it on a daily basis, the logic whereby living makes sense.”

One interesting feature of the book is that in two ways it’s actually not illogical or senseless. First, the consistent use of non sequitur is itself an organizing principle, and one quite logically chosen as a means to the representation of a disorderly world. In a world that makes no sense, only nonsensical poems fit the phenomena, capture the feeling of being alive, or make sense to write. Second, thematic sense tends to emerge both from the juxtaposition of inevitably related things, and also from the preoccupations and habits of thought in the writer’s mind.

And these three meanings of senselessness are connected. For it is especially our pattern-making that insulates us or makes us feel secure against vulnerability and death. But in Hejinian’s view, that pattern-making—which she sometimes pokes fun at with lines like, “8, 9, 10, 11, minus 31, 8”—distorts the phenomena, the raw particularity of perceptible experience. There is “everywhere manifestation, nowhere explanation” (5). Near the end of the book she writes, “Appearance of the world, disappearance of coherence” (75), linking the awareness of appearances as they are to the loss of reason and unity. The patterns or contexts into which we place the things we perceive in fact distort those things; things get forever lost “in” context (20), not lost “from” context, as we might expect.

As shown by the preface, there is a tight connection between Hejinian’s awareness of death and her doubts regarding patterns. Death is not only the ultimate loss of regularity and context—“we are subject to the ultimate disorientation” (67)—but also casts doubt upon even the efforts of the living to find enduring patterns. Just as “the world of the dead” is “beyond context” (19), or lacks the connections necessary for intrinsic patterns and sense, so too within the world of the living “jollity, sorrow, gloom, gentleness, and success appear without excuse, like a lunatic’s opinions, and just as with a nut’s ideas, randomly disappear” (15). Our minds cannot help but discover or create patterns among the randomness, and to find comfort in the security these patterns seem to imply or provide: because things went a certain way last year, and last week, they must continue in their predictable and comforting course. But (in the conclusion to the same poem) Hejinian denies this: “We cannot hope to continue indefinitely without ever getting into trouble” (15). For even the patterns or contexts we seem to find are constructed by our minds rather than inherent in the world apart from them (if there is such a world), and therefore do not govern or dictate the future but only serve as descriptions of a small set of past experiences. Thus our attempts at sense-making and future-prediction, however analytically rigorous they may seem, end up dissolving into nonsense in the end; what begins as the rock-solid logic of legal or philosophical rhetoric dissolves halfway through a line: “When this truly becomes obvious—when it is incontrovertibly true—dap dat-a-dong, dat-a-dang, dap-a-dong” (14).

Hejinian calls attention to the mind’s role in meaning-making partly through ambiguous syntax:  the line, “It did it did it did it” (10) might be read as a statement followed by two questions, two statements followed by a question, or as three statements followed by an attempted but interrupted fourth statement, to name just a few possibilities. And the line “How do sentences do this?” raises the question of how sentences raise questions about meaning in the world, even when they are in a sense completely devoid of meaning, or stand alone as mere language, hollowly self-referential, divorced from reality. Our acts of interpreting these sentences will dictate their meaning, will be, in a sense, the sentences themselves. And to call attention to the mind’s role in meaning-making, the mind’s role in sense-making, is to undermine our assurance that the patterns in which we find comfort are actually out there in the world, dependable sources of security, rather than creations of the frightened mind, latching on to language or words in order to find a meaning and stability absent in perceptible reality: “It’s remarkable how often one types the instead of to but it carries no more meaning than there is to be found in the act of cutting through a large head of cabbage” (14).

The poem that best captures the ultimate impotence of our efforts at meaning-making will end up being, paradoxically, the poem most effective in conveying an important and meaningful truth about human existence: “The statue at its fullest is emptiest of meaning” (56). In a world of merely human meaning-making, it makes sense to be senseless: “Everything applies in the hyper-patterning that retrospect attempts and to which the irreverent response is ‘How splay’ ” (56); it makes sense for Hejinian to invite her reader to make sense of the senseless with her: “O experiential friend, let us kiss and make sense” (24). Even if “the instrument of lamentation” is “impossible to tune” (46), even if “the sun burns every story to a crisp” (69), there is something “right again” about the “spill of M&M’s” (77) in our multifarious and conditional reality of “sandwiches and obligations, geometry and macaws” (2, 63).

Through non sequitur and ambiguity, and with a keen awareness of the darker sides of postmodernism, Hejinian has succeeded in capturing the sense of a senseless world, and thereby to some degree making that world intelligible within the domain of art or artifice; she has succeeded in doing justice to a world in which justice is rarely operative, and thereby, in some sense, lodging a protest through art that becomes one part of the world. “At the moment,” Hejinian writes at the conclusion to one sonnet, “chance is as obligatory as tradition once was” (47).

Lewis Fallis teaches in the Writing Seminars at Johns Hopkins University. He is the author of Socrates and Divine Revelation (Rochester, 2018).

William H.F. Altman, The Bogotá Lectures; §2. “Plato and ‘The Presocratics’”