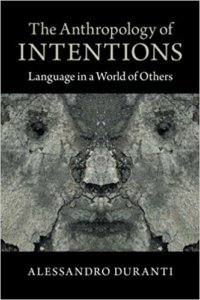 The Anthropology of Intentions: Language in a World of Others. Alessandro Duranti. Cambridge: Cambridge University Press, 2015.

How and to what extent do people take into account the intensions of others is the question The Anthropology of Intentions answers. By analyzing data collected over three decades in the U.S. and Samoa, Duranti shows that a variety of discourses exist where some communities avoid intentional discourse, speculate about their own intentions, or guess the intentions of others. To account for such variation, Duranti proposes an international continuum that draws upon phenomenology and analysis of face-to-face interaction.

In the first two chapters, Duranti questions whether intention discourse is universal as proposed by Grice, Austin, and Searle, the “Standard Theory” of interpretation, in linguistics: a particular and common type of meaning in human actions that is realized through conventional signs (linguistics) that is distinguished from non-conventional (e.g., recurrent associations). One could study conventional signs to determine intention – to know a person’s consequent desired action. But by reviewing the history of the term intention and comparing it to other cultures, Duranti discovers that the Standard Theory is defective.

For example, there is no term that fully captures the English word “intention” in Samoan. In chapter three, Duranti presents his field work research about Samoa as a society which privileges reading a person’s actions “in terms of their effects on social relations and on the public face of a particular institutions, groups, and positional roles” rather than examining a person’s state goals. The language exists to speculate about one’s motivations and emotions but the Samoan cultural preference is to ignore them. For instance, lying is condemned and seen as a violation of trust but discussions about the causes of lying is brief or dismissed. Another case is in chapter four where Duranti sees whether there is an equivalent word of “promise” in Samoan. What Duranti concludes is that there is no word that corresponds to the word “promise” in Samoan. The result is that political speech tends to be opaque, indirect, and more focused on avoiding offense rather than stating a particular objective.

With these findings, Duranti returns to the theoretical literature in chapter five where he analyzes the medium through which representations are constituted, the audience of the interaction, and its cultural context. He argues that the medium needs to be reconceptualized to account for interactional complexity in language: different media or genres of speaking may be imbued with different understanding of the world. The process of how language is formed, used, and received must be re-thought among anthropologists, linguists, philosophers, and ethnographers while still being tied to empirical observations of societies.

In the next chapter, Duranti examines public speeches made during a 1995-96 U.S. political campaign of Walter Capps for Congress. In the first days of the campaign, Capp spoke without a script which embolden the audience to react in ways surprising to the speaker. The choice for the speaker was to go along with the audience and capitalize on their unexpected reaction or try to keep control over the meaning of his own words. Capps was able to edit his speech and reformulate his stance in a number of key issues to retain some control over his message and present himself as person who could be critical without being mean. This struggle to find the right balance between pleasing others and asserting oneself shows that the promises of political candidates are as much a collective enterprise than an individual one.

The rest of the book is a discussion of the theoretical problems, trends, and possible paths to understand discourse. Chapter seven is a reproduction of an email exchange between Duranti and Teeun van Dijk about the role of intention in discourse; chapter eight is Duranti’s reservations about the “theory of mind”; chapter nine examines Husserl’s concept of modification – how we change our relationships to objects in the world – as a possible analytical tool to document how children learn; chapter ten is a criticism of Searle’s collective intentionality because of its binary account of individual and collective intention; and chapter eleven is Duranti’s answer to Searle’s collective intentionality with an international continuum that draws upon phenomenology and analysis of face-to-face interaction to understand intention.

Duranti’s The Anthropology of Intentions is a wonderful read that explores the problem of intention both theoretically and empirically and why it matters. The book blends empirical research with theoretical scholarship in a way that is accessible to readers. By providing a cross-cultural comparison, Duranti is able to present a persuasive case why there are many intentions as there are societies. In a world that is increasingly becoming smaller with globalization, The Anthropology of Intentions is an important book to consult to understand others and their intentions.

Higher Calling: The Rise of Nontraditional Leaders in Academia

New Television: The Aesthetics and Politics of a Genre