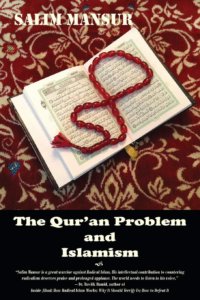 Salim Mansur writes as a self-described “dissident Muslim,” which he defines as “someone who either critically questions or rejects the ‘officially’ sanctioned views, doctrines, and dogmas of traditional Islam in favour of ‘rethinking Islam’ within the modern context” (3).  His concern is the “crisis of Islam” caused by the rise of Islamism, or political Islam, and the pre-existing and ongoing failure of Muslim leaders to provide a satisfactory religio-political alternative in the context of modernity.  The central conflict as Mansur describes it—the “war within Islam”—is between Islamists and anti-Islamists, theocrats vs. anti-theocrats, Salafists vs. modernists.  Islamism is an “ideology” that reduces Islam to a political project.  The Islamists are essentially Salafist theocrats—theocrats who want to return to the ostensible ways of the al-salaf al-salih, the “pious ancestors” of the first three generations of Islam.

The ancestors’ way of life, as they interpret it, was determined by the rule of Sharia law as enforced by an Islamic state, meaning a government of pious Muslims who adhere faithfully to the true Islamic creed.  Concerning the creed, they take the oneness of God (tawhid) indicated in the first part of the Islamic statement of faith (“There is no god but God”) to imply that there is no legitimate sovereignty but God’s—not only no sovereignty of other gods (since there are no other gods) but no legitimate human sovereignty—and thus that the only legitimate government is one in which the human leaders act as God’s vicegerents imposing God’s law.  As to the second part of the Islamic statement of faith (“and Muhammad is his Prophet”) they understand Muhammad, God’s final Prophet and His vicegerent par excellence, to have provided the model of Islamic government in the order he established at Medina.  The meaningful opposition to the Islamists, according to Mansur, is not Islamic traditionalists, who have not been able to adapt to the modern world any more effectively (even if less destructively) than the Islamists have.  In Mansur’s view, the only real Muslim alternative to Islamism is a spiritually vibrant Islamic modernism.

Unlike many other observers who want to explain the problems of the Muslim world in strictly or primarily political or economic terms, Mansur takes the essential crisis to be fundamentally religious, and in particular rooted in varying interpretations of the Quran, the basis of Muslim faith.  The “Quran problem” referenced in the book’s title is the interpretive problem posed by Muslim disagreements about the Quran’s meaning.  He stresses that there are “many faces of Islam” (Sunni, Shia, Sufi, etc.), each understanding the Quran and therefore Islam itself somewhat differently.  Significantly, Mansur sees many of the disagreements over Quranic interpretation as rooted in “conflicts of interest” related to struggles for power within the Muslim community.  In other words, the differing interpretations have in many cases been a product of power struggles—over who should rule after the death of Muhammad, caliphal and dynastic rivalries, Sunni vs. Shia and other Islamic sub-groupings, the establishment of competing orthodoxies through the work of Islamic scholars (ulema) and jurists (fuqaha), etc.  Assumptions about Islam and the Quran, then, were significantly shaped by those in power, and interpretations of Islam, often questionable, were imposed on populations in violation of the Quranic injunction that “There is no compulsion in religion.”

In any case, if Muslim nations have failed to modernize, the reason in Mansur’s judgment is that their religious beliefs, based on assumptions about the Quran, will not permit them to make the necessary adjustments.  Therefore, the prerequisite to success in reforming troubled Muslim populations is to reform Islam itself, and that means reading the Quran differently than either the traditionalists or the Islamists.  This does not mean for Mansur giving up anything essential to Islam.  It means, rather, separating out what is essential from what is historically contingent and, from the standpoint of this essential Islam, spiritually and pragmatically problematic.  This effort requires, Mansur argues, a historical-critical analysis of the Quran and of the Prophet Muhammad himself.

The first task is to distinguish between the “sacred history” of Islam (the providential history of its establishment through Muhammad) and Islam’s “profane” or “mundane” history.  One of the fundamental errors of both Muslim traditionalists and Islamists has been to confuse these histories and thereby to take elements of the profane history as essential to Islam rather than as situation-specific, sometimes highly dubious, developments.  The task of determining what is sacred and what is profane will necessarily require a reexamination of Muhammad’s mission and of the Quran.

Mansur first critically examines the “myth of Muhammad,” trying to sort out, in the spirit of Albert Schweitzer’s The Quest for the Historical Jesus, what we actually know about Muhammad from the images of Muhammad that developed over the decades and centuries after his death.  He then examines the “historical Quran”—“a text that has a history in terms of its compilation and how it is read and understood by successive generations of Muslims and non-Muslims,” and a text that is something “distinct from the revelation a Muslim recites, commits to memory, and which he believes draws him near by imitating Muhammad, the Prophet of Islam, to the Lord of the Universe and Master of the Day of Reckoning whose mercy he asks.”  He concludes about the Prophet that Muhammad is important not because he was perfect but because God used him like the often quite imperfect Hebrew prophets to communicate the divine word.

Of the Quran he concludes that is not a scientific book and “not a book of history, a biography of prophets, or a manual of jurisprudence,” but rather a “revelation by which God reveals Himself to people, or to those among people, Muslims who take the revelation as a matter of belief to be God’s Word.”  The Quran should be read in light of its most dominant theme, the compassion and mercy of God.  (The words “In the Name of God, the Compassionate, the Merciful” precede every sura, or chapter, in the Quran save only one, and that one is thought to have been originally part of another sura.  The Quran, then, is literally framed in terms of God’s compassion and mercy.)

Beyond the foregoing critical analysis of Islamic sources, the bulk of Mansur’s book is taken up with the profane history of Islam and derailments along the way from the Quranic ideal as just outlined.  Among the most critical episodes for purposes of Mansur’s story were the following:

One of the unintended consequences of the Iraq War was to set up a greatly intensified conflict between Sunni and Shia, stoked by the likes of the brutal Sunni jihadist Zarqawi of AQI, and leading to heightening tensions between Iran, the self-appointed representative of Shia Islam, and Saudi Arabia, the self-appointed representative of Sunni Islam.  Mansur warns of the possibility or likelihood of first Iran, and then Saudi Arabia, getting nuclear weapons, raising the prospect of an “apocalyptic war” between the two powers.  Mansur’s hopeful alternative is a Saudi acceptance of the Jewish state of Israel in an effort to get support from the latter country against the Iranians, who are after all supporting Hezbollah and Hamas, Israel’s primary terrorist foes.

As the foregoing analysis hints, Mansur’s main suggestions for reform of Islam are that Muslims should restore reason and philosophy in Islam and reopen the “doors of ijtihad,” thereby enabling creative solutions to modern Muslim problems, and in particular spiritually enriched, creative adaptation to modernity and modernization.  Concerning non-Muslims, he argues that the West should not remain neutral with respect to the “war within Islam” but should frankly distinguish between Islam and Islamism, “provide moral and material assistance to Muslims struggling against Islamists,” and develop a grand strategy for containing and combatting Islamism on the model of George Kennan’s Long Telegram outlining the US containment policy during the Cold War.

This reviewer has been uncertain about the degree to which Western nations should engage in open ideological warfare against Islamism, given how much animus Islamists, and many Islamic traditionalists as well, have against the West and their corresponding tendency to discount totally what whatever Western nations in general and the US in particular might say.  Mansur has persuaded me that an open and relentless ideological attack is called for in order to bolster Islamic modernists and “dissident Muslims” who might otherwise be less bold than Mansur himself.  The Middle East is rife with conspiracy theories about US machinations, so there is no point in hiding US opposition to Islamism or support for Islamic modernism.  Consistent, energetic US side-taking on this particular divide may embolden Muslim dissidents the way Reagan’s “Evil Empire” rhetoric emboldened dissidents of the Soviet regime and similarly accelerate the process of reform.

In conclusion, Salim Mansur’s book is refreshingly frank and unflinching, most strikingly in his critique of Muslim orthodoxy and of Muslim anti-Semitism, which unlike many other Muslim commentators he does not try to minimize or explain away.  The analysis of the subject matter is extraordinarily rich, comprehensive, and wise, and the basic argument compelling.  If I had to recommend one book on the question of the relation between Islamism and problems of Quranic interpretation, this would be it.  I will in fact be assigning the book as one of the required readings for my upcoming Religion and Politics course and would consider making it a permanent fixture of the reading lineup for the course, which I teach regularly.

Scott Segrest is an Assistant Professor of Political Science at the Citadel. He is author of America and the Political Philosophy of Common Sense (Missouri, 2009).