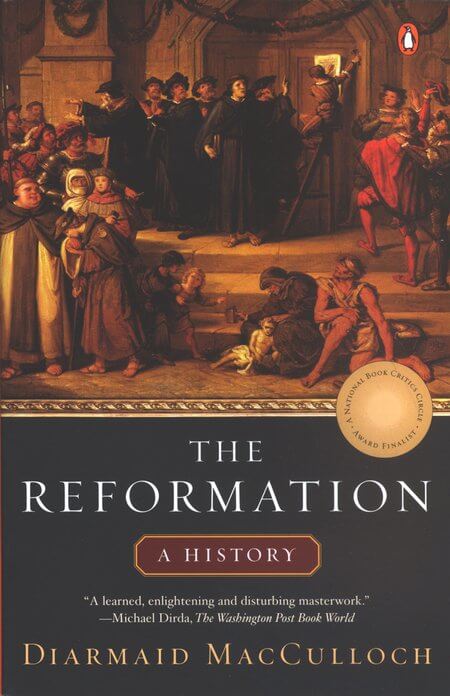 The word “Protestant” was originally related to a specific occasion in 1529 when at the Holy Roman Empire’s Diet a group of princes and cities who supported the programs of reformation promoted by Martin Luther and Ulrich Zwingli found themselves in a voting minority. To keep their solidarity they issued a “Protestatio,” affirming the beliefs they shared. The word entered the English language when, planning for the 1547 coronation of King Edward VI in London, a place was appointed for the “Protestants,” the diplomatic representatives of the reforming German states.

Instead of “Protestant,” MacCulloch prefers the word “evangelical” because it was widely used  at the time and encapsulates what was important to these Christian reformers, the good news of the Gospel, the evangelium. In The Reformation, MacCulloch recounts the Reformation beginning in the sixteenth century when Latin Christian Europe’s common culture was falling apart and Europeans established their power in America, Asia, and Africa. Ideas matter in MacCulloch’s account where reformers were able to seize the imagination of enough people to overcome the power of old church structures and spread them throughout Europe, partially because of the common language of Latin among its educated people.

Buttressed by the intellectual movement of humanism and a renewed interest in Augustine, European Christians were open to reform church teachings and practices, particularly transubstantiation and purgatory, papal primacy, and the role of Church in politics. Martin Luther (1483-1517) was one of these Christian Europeans who sought to reform the Church and, in the process, led an “accidental revolution” in 1517-21. According to Luther, the Pope was a threat to good government, transubstantiation was to be rejected, and grace alone granted salvation.

The Reformation also started in Zurich with Ulrich Zwingli (1484-1531) convincing its city council that the Bible was the only source of doctrine to accept. Zwingli also believed that the sacraments were symbolic acts that humans did for God rather than what God did for humans. They were also seen as welcoming one to a human community; consequently, there was no need for a physical sign of bread and wine at the Eucharist or baptism to be administered to little children.

After the Holy Roman Empire’s Diet in 1529, Protestantism was officially born with political alliances made and remade among states in support and against it. From these political machinations was the flight of Jean Calvin (1509-64) from France to Switzerland where he spread his beliefs about the absolute sovereignty of God in salvation. Other reformers were Henry VIII, James V, and the Anabaptists who believed the last days were arriving. In response to these developments, the Jesuit order was founded and the Council of Trent (1545-63) was held by the Catholic Church, which not only reaffirmed its teaching but exported them to America, Africa, and Asia. However, the failure to reconvert Protestant principalities resulted in a divided Europe.

As these religious divisions became greater, confessionalization emerges across Europe: the creation of fixed identities and systems of beliefs for separate churches. While confessionalization was a defeat to rebuild a unified Latin Catholic Church, it also provoked widespread warfare, such as the Thirty Year War (1618-48), leading to an exhausted and polarized Europe afterwards. MacCulloch describes the roles that Philip Melanchthon (1497-1560), Zacharias Ursinus (1534-1583), and others played in this period of confessionalization, warfare, and eventual modus vivendi in Europe.

At the end of his narrative, MacCulloch reserves a chapter on the British legacy (1600-1700) of the Reformation because of its internal civil war where Charles I was put on trial and executed in 1649 – nowhere else in Europe did this transpire – and its external expansion to North America from which eventually would emerge the United States. Out of this turmoil came the Anglican Church that took a different course than other Reformed Protestant Churches.

Rather than continuing his history, MacCulloch concludes by examining social and intellectual themes, such as an iconoclasm, widespread literacy, the family with its role of women and children, and Protestantism’s relationship with Judaism, natural philosophy, and the Enlightenment. It is a shame because MacCulloch is a compelling and lucid narrator of a complex phenomenon; but it may be a fitting way to end the book about Protestantism because it was its ideas where it started and gained its power. How these ideas are translated into the patterns of life in European society is masterfully and marvelously told in MacCulloch’s The Reformation.