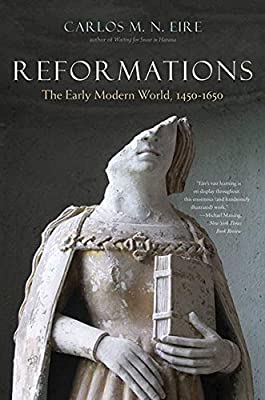 Reformation is a retelling of this epochal change in western civilization to understand the modern world in which we live. Eire takes religion seriously as a factor in human events that shaped that age, a phenomenon that we in the West today take less seriously, although it still given great weight in other parts of the world, e.g., the Islamic world. For Eire, religion was the language of conceiving and expressing ideas and feelings, a way of interacting with people, and sparked social, economic, political, and cultural exchanges. It was the fundamental way that early modern Europeans understood and participated in the world.

The Reformation was the sixteenth-century break with the Catholic Church in order to reform Christianity from the false Latin Church. Of course, Catholics mocked this presumption of reformation and instead labeled reformers as heretics. For them, genuine Christian reform transpired in the Catholic Church. Today there is growing acceptance of the usage “early modern” instead of Reformation or Counter-Reformation with a focus on the plural reformations that occurred in sixteenth and seventeenth centuries Europe. This perspective emerged from historians less interested in theology and more attentive to social, cultural, economic, and political issues. Eire accepts the concept of multiple Reformations in his book but still proposes that religion is the driving force behind social, cultural, economic, and political change. Furthermore, he stresses the interrelatedness of these reformations to understand their inception and flourishment.

Reformations consist of four distinct parts: 1) the late medieval period (or pre-Reformation period or Renaissance); 2) the emergence of Protestantism; 3) the reform of Catholicism; and 4) the outcome of the various Reformations in the seventeenth century. The first part explores the corruption and abuses of the Catholic Church that made it an object of disdain and the emergence of dissenters like the Waldensians, Lollards, and Hussites. It also examines the early attempts at reform by the Catholic Church as well as the European revolutions in trade, travel, information, and culture.

The second part is a history of the churches that broke openly with the Pope: Lutherans, Swiss Reformed, Radical, Calvinist, and Anglican. In two chapters, Eire magnificently recounts Martin Luther’s life from student to monk to rebel to heretic to reactionary. Ulrich Zwingli plays a central role in Eire’s history of the Swiss Reformation. Felix Mantz, Michael Sattler, and other Anabaptists are accounted as part of the Radical Reformation that was loathed by both Catholics and Protestants. John Calvin’s revolutionary redefinition of the sacred and its implications are examined and the establishment of the Anglican Church is surveyed. In their various ways, these churches redefined not only religious belief and behavior but also community, politics, and culture.

The third part explores the reforms undertaken in the Catholic Church after the advent of Protestantism and analyzes the full complexity of early modern Catholicism. This includes the Council of Trent with the standardization of ritual; the promotion of saints, mystics, and miracles; education of the clergy; and greater participation of the laity. Also covered is the Society of Jesus and Christian missions to the Americas, Africa, and Asia. All of these reforms laid the foundation for a resurgent Catholicism in the modern world.

The fourth part deals with the immediate outcome of the Reformations and how European Christendom became fragmented into modern Europe. Eire reviews the Thirty-Year War (1618-48), the French religious wars (1562-98), and other conflicts that ultimately led Europeans to back off from religion to find truth and instead turn to logic and empirical observation for answers. The search for religious orthodoxy among Protestants and Catholics and its resulting religious intolerance also contributed to this intellectual turn from religion for truth. It was the age of reasonable doubt, of the confessionalization of Europe, and the pursuit for a new social glue other than religion to bind society together.

In Reformations, Eire starts at 1450, when around this time Pope Nicholas V conceived of a new basilica of St. Peter’s of Rome and Johannes Gutenberg invented movable-type printing, and concludes at 1650, two years after the end of the Thirty Year War, for the sake of symmetry (1450-1650). For Eire, the Protestant Reformation is “above all a metaphysical and epistemic revolution, a new way of interpreting reality and of approaching the ultimate” (746). Specifically Protestant desacralized the world by reducing the scope of the supernatural on earth in three ways.

With idolatry and iconoclasm, Protestants made matter and spirit less compatible with each other. Religion was the search for the divine in the unseen spiritual realm rather than in sacred spaces, relics, or images. Second, Protestants rejected the possibility of merging with God in mystical ecstasy or miracles. The supernatural was confined to heaven and the natural limited on earth. Finally, the dead and the living lived in segregated society for Protestants with mediation and intimacy with the dead stripped away. The Catholic response to Protestant desacralization was hypersacralization and ushered in a golden age for miracles and mysticism in the Catholic world.

While Latin Christendom ceased to exist, Christians nonetheless thrived in the chaos, although Europe would remain – and continues to this day – fragmented. To understand this current condition, we need to back to its origins, the Reformations. Eire has offered us such an account. Reformations is an introduction and survey of the pivotal sixteenth and seventeenth centuries in Europe that ushered in the modern world and a wonderful read for the nonspecialist. Transparent and elegant, Reformations explains our modern present by looking back to our medieval past.