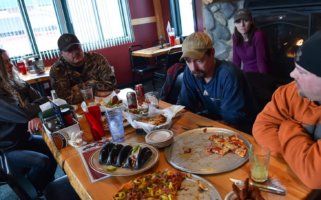 Strangers in Their Own Land: Anger and Mourning on the American Right. Arlie Russell Hochschild. New York: The New Press, 2016.

Hillbilly Elegy: A Memoir of a Family and Culture in Crisis. J.D. Vance. New York: Harper, 2016.

In my previous essays we have looked at the political polarization of the country, the marginalization of religion in our civic culture, and the inability of the Democratic Party to respond to these events other than an appeal to identity politics. Compounding these problems is the unraveling of the white working class in the United States. Started under Carter, both Republican and Democratic administrations have pursued policies that have undermined the white working class. Globalization, deregulation, and free trade have eliminated its economic base, while the collapse of Christianity have removed the moral fiber that had guided them. Seeing neither Republicans nor Democrats offering them any hope, the white working class in 2016 – to paraphrase Peter Sloterdijk – voted for an illegitimate unknown than an illegitimate known.

In Charles Murray’s Coming Apart, we see the white working class is in a state of dysfunction with its economic, social, and capital absent. The virtues for a successful life in America – industriousness, honesty, marriage, and religion – are now the monopoly of the upper class, “the Belmont’s” of the country. By contrast, the “Fishtown’s” of the white working class is one of despair, addiction, and family instability. But what is truly of concern is that these two communities no longer interact with each other in a meaningful way. The elites live in a cognitive bubble of bourgeoisie virtues and aspirational expectations, while the working class has the vulgarity of popular culture to guide it in its behavior and desires. If this trajectory continues, the future of the country is class polarization with the inability to find a common civic purpose for all citizens.

Robert Putnam’s study in Our Kids reports similar findings that are found in Murray’s book. Focusing on children, Putnam records the discrepancy between rich and poor children in their family structure, schools, and social networks. This increasingly inequality in opportunity between rich and poor children is creating a permanent underclass that bodes ill for economic growth, social mobility, and democratic life. The solutions of parental support, robust schools, and strong communities are well-known, as Putnam concludes in his book. What he doesn’t touch upon is what roles should government and civil society play in these solutions and how government and civil society can reinforce rather than oppose each other in diminishing the opportunity gap for our children.

If the first two books in this essay are social science accounts of the white working class, the last two books are from an anthropological perspective. Hochschild’s Strangers in Their Own Land reiterates Frank’s What’s the Matter with Kansas? theme but sets her story in Louisiana. Most people are distracted from their authentic interests by the Republican Party’s concerns of big government, left-wing media, and the disappearance of religion in public life. A few recognize and acknowledge the costs of economic development by the energy industry (e.g., pollution) but believe it is worth it if jobs are created. For Hochschild, what Louisianans need to recognize is that their beliefs of smaller government, deregulation, and traditional values actually don’t advance their economic and environmental interests. They need to be removed from their false consciousness and see that an active government is more aligned with their true interests.

Unlike the other three books, Vance’s Hillbilly Elegy avoids policy prescriptions and instead focuses on his own journey and family. Raised by his grandparents in Appalachia, Vance manages to graduate from high school, enter the Marine Corps, enroll in Ohio State, and attend Yale law school. Along the way, we see how a loss of agency looms over the people of Appalachia and results single-parent households, drug addiction, and death. But perhaps more significant is that we see those who manage to escape lack the social norms, values, and cues of how to succeed in college (e.g., networking, job interviews, internships). Good grades are not enough to secure a good job. Fortunately for Vance, he had mentors who guided him through these unspoken rituals so he could succeed. But one wonders what happen to those who were not so fortunate.

To complement these books, which have explored the unraveling of the white working class, is Borjas’ We Wanted Workers. This book examines the economic dimensions of the white working class and how immigrants adversely affects them. After discrediting various studies that claim immigration has an overall positive economic benefit for the United States, Borjas shows that free trade policies have benefited both the elites in the developed world and the poor in the undeveloped one. However, for the working class in the developed world, their wages are stagnant and employment opportunities declined as a result of legal immigration into the United States. Furthermore, Borjas show how there has been a slowdown in cultural assimilation of recent legal immigrants which, in turn, influences their social and economic mobility and thereby creates the conditions for a permanent underclass. To address this, Borjas calls for a reform of the American immigration system with an emphasis on high-skill workers given preference for entry and stay.

Condescend or romanticize them, the white working class will continue to hold disproportionate political power in presidential elections in the near future, as they are concentrated in key swing states of the upper Midwest and Pennsylvania. But the white working class is in a state of crisis with their economic base damaged and their culture destroyed. As the contemporary opioid crisis indicates, they are committing suicide. As their support for Trump in the last presidential election shows, they can no longer be ignored; and thus to understand them – their problems, their anxieties, and their expectations – is to understand ourselves.

Also see “Sorting Out Who We Are,” “What’s the Matter with the Left,” “The Collapse of Christian America,” and “The Resentful Politics of Populism.”