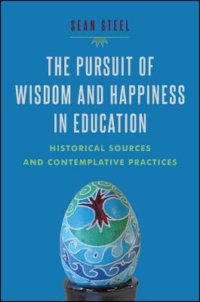 Aimed at primary and secondary school educators, Sean Steel’s The Pursuit of Wisdom and Happiness in Education argues that philosophy, contemplative practices of wisdom properly understood, should be incorporated into a school’s curriculum in order for students to live well and be happy. For Steel, the neglect of philosophy in the school system is due to a multitude of reasons: the state requirements of demanding critical and analytical thinking, technology, and assessment above all else; the confusion, if not outright hostility, among academics about philosophy and its role in the school system; and debates among classical and medieval thinkers about the nature and purpose of philosophy itself. In this book, Steel not only clarifies the points of agreement and dissension among these parties about what constitutes philosophy, but how philosophical practices of wisdom can be incorporated into the classroom for the benefit of students.

The book has sixteen chapters, with an introduction and bibliography, and is divided into five sections. The first section (chapter 1) reviews the contemporary academic literature about the role of wisdom in primary and secondary schools; the second (chapters 2-5) examines how selected classical and medieval thinkers understood wisdom; the third (chapters 6-8) shows how contemporary schools discourage practices of wisdom; the fourth (chapters 9-11) points out the limitations of current attempts of incorporating contemplative practices into schools; and the fifth (chapters 12-15) explores the state of wisdom-informed pedagogies in school today. Steel concludes with his own account (chapter 16) of what a wisdom-infused education would look like, offering a vision of a Platonic metaxy with students ascending towards as well as descending down from the apex of wisdom.

In the first chapter, Steel shows that contemporary academics in education who think about wisdom conceive of it as a type of cognitive skill or a process of self-discovery that can be assessed: Robert Sternberg, Patricia Arlin, Paul B. Baltes, Mihaly Csikzentmihalyi and Kevin Rathu all fail to see wisdom as a type of character or spiritual desire within a person. Other thinkers suffer from a conceptual confusion about the nature of wisdom. John Kekes and Douglas Lawson focus only on prudence and neglect wisdom; Glen Gray equates wisdom with theoretical knowledge but is not sure how it is related to prudence; and Charles Hartshorne thinks wisdom is a type of excellence (arete) that is tragedy-free, contrary to the Greeks’ understandings of it. Finally, John Dewey and his followers dismiss wisdom entirely from student learning, thinking that society can progress with only ratio (discursive reasoning) and discarding intellectus (contemplation).

In the next four chapters, Steel reviews Aristotle’s, Boethius’, Maimonides’, and Aquinas’ understandings of wisdom to find a definition that, unlike contemporary academic accounts, is richer, fuller, and more accurate in the way humans know the world. The wise person in Aristotle knows how first principles are related to truth and, with prudence, are related to particulars. Thus, the wise person (spoudaios) is one who knows both universals (wisdom) and particulars (prudence), seeking the end of happiness (virtue and self-sufficiency) for human beings in their education. Schools therefore should be oriented to contemplate the highest things in life, the truth, instead of preserving biological processes of nutrition, reproduction, and self-preservation (the ends of critical and analytical thinking). By contemplating truth, students partake in the immortalizing activity of philosophy around which school should be centered.

Aquinas adds to this Aristotelian paradigm of wisdom with a love of God that is a gift from the Holy Spirit. It orders a person’s intellectual and moral virtues for happiness. This account of wisdom differs from contemporary educators (e.g., Benjamin Bloom) who fail to distinguish between discursive reasoning and contemplation, having only discursive reasoning as the ultimate objective for students. By contrast, discursive reasoning is at the bottom of Aquinas’ account of reason with contemplation at the top. Even if one were to remove God from the classroom, Aquinas’ understanding of wisdom still is useful for educators by encouraging students to work without consideration of their grades and instead study for a love of knowledge. But if discursive reasoning is the ultimate end, then students are motivated to learn only for their grades, becoming preoccupied with busywork and neglecting contemplation.

Contemplation arises within oneself in resistance to the disorder in the world around him or her. The desire to discover a right order within oneself is the philosophical response to tragedy, as Boethius’ life demonstrates. However, as Maimonides tells us, only a few will become philosophical because of the difficulty that this activity demands. This does not condemn the many to total ignorance if they learn the cultural traditions of their societies, which are the carriers of wisdom for the many. Wisdom consequently is possible for all students to learn, albeit their learning will differ according to their abilities and characters. What these classical and medieval thinkers offer is a portrait of wisdom that is more comprehensive than contemporary academics’ versions. Whether their insights can be incorporated into the classroom is the subject of the rest of this book.

In the third section, Steel describes the drive to integrate technology into the classroom with the role of the teacher as an authority of knowledge being replaced as an architect of knowledge who is focused on process rather than content in the education of students. Citing Barry Cooper’s works, Steel shows how technology is fundamentally about technique and pragmatism and therefore cannot be a substitute for wisdom. The contemporary promotion of technology in the classroom is similar to Augustine’s time, when successful teachers were sophists and proud of their techniques compared to lesser known educators who were humble but genuine seekers of truth. Whether in ancient times or today, the problem of introducing philosophy, a sense of wonder, into schools is a perennial one, where students are not concerned with particular goals and thereby possess leisure to contemplate and celebrate the truth.

In the fourth section Steel reviews the recent attempts to infuse wisdom into schools, known as the P4C (Philosophy for Children) Movement. Steel provides two examples, one which is genuinely philosophical and the other which is not. The first is Gareth Matthew whose studies show that children engage in philosophical inquiry, contrary to the claims of educators like Jean Piaget. Teachers and students consequently must be protected from the suffering of naïve questioning and allow courage to philosophizing with no apparent benefit to them. By contrast, Matthew Lipman conceives of philosophy as a type of self-corrective thinking that teaches critical and analytical reasoning, making philosophy a handmaiden to the arts and sciences, whereas it should be the opposite. These two different approaches raises the question what is philosophy: is it the love of wisdom or a type of metacognition? For Steel, philosophy is the former: it is a basic existential disposition to the world that is not a concept, method, science, or even teachable subject. The most a teacher can do is show students how to study philosophy, for to philosophize must emerge within the person itself.

In the fifth and final section of the book, Steel shows how philosophy, “contemplative education,” can be incorporated into classroom practices. Steel begins by discussing the problems that technology poses to contemplative education, citing George Grant’s criticisms that computers actually deform students’ consciousness of reality, prompting curiosity and “surfing” instead of inquiry and study. He next discusses specific techniques that teachers have adopted to introduce philosophy in the classroom, like meditative practices, mindfulness, journal reflections, attention to primary texts, and the use of visual material and physical objects. Undergirding these practices is both an epistemological and erotic (spiritual) commitment to contemplation about the truth. They are attempts to awaken in students’ consciousness that aspect that seeks immortality and their place in the world, seeking answers to the purpose of their existence.

In the conclusion Steel invokes Plato’s symbol of the metaxy, the in-between state in which humans exists between the divine and the mortal, as for the type of contemplative or philosophical education he advocates. Both teachers and students must be attune to this existential tension and explore both the ascending and descending aspects of the metaxy so they can acquire wisdom and prudence together. If schools truly desire to become philosophical, if they wish to have wisdom in their students, then they must paradoxically must make time and place for “doing nothing” so students can live in leisure.

For those interested in education, Steel’s The Pursuit of Wisdom and Happiness in Education is a required read. Grounded in both theory and practice, the book provides an alternative perspective of what schools can and should be. Realistic about the obstacles implementing such an education, Steel nevertheless suggests practical ways that create a space and a time for leisure in the classroom. If you believe education is more than accountability and assessment, technological mastery and prowess, or global competition and job-training, The Pursuit of Wisdom and Happiness in Education shows that you are not alone.

Also see “Teacher Education and the Pursuit of Wisdom: A Practical Guide for Education Philosophy Course.”

Hitler’s Monsters: A Supernatural History of the Third Reich

Timelessness of Proust: Reflections on In Search of Lost Time

Theorizing Without Theory: A Review of The People vs. Democracy: Why Our Freedom is in Danger and How to Save It