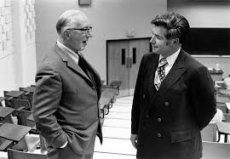 I’m not that happy with the “master teacher” title, bearing in mind André Glucksmann’s questioning of the so-called “master thinkers,” except in the sense that I think everyone here is thinking of. That is to say, of Voegelin as an intellectual and spiritual authority. Unlike the other contributors to this panel, I didn’t have Voegelin as a teacher in the sense that I attended his lectures or that he directed my thesis. Still, I had no hesitation in the Foreword of my 1980 doctoral thesis in thanking him “for his wisdom and kind guidance — for me he has been the Socrates who bears in his heart the image of Everlasting Beauty.”

When Voegelin visited Ireland in September 1972, he graciously agreed to meet some of my friends for a question and answer session that we tape-recorded and typed up as his “Irish Dialogue.” Due to my lowly reputation as a just-beginning lecturer at University College Dublin, I couldn’t manage to interest any of my colleagues to come along. So I scraped up some friends and acquaintances from the highways and byways, several of whom happened to be Marxist in orientation. One was involved in a movement that perhaps in other countries would have been revolutionary (1).

What was interesting that evening was how Voegelin, like Socrates in the Gorgias and the Symposium, (2) had a genius for grasping the varying existential stance of people he’d never met before. With those he experienced as akin to Callicles, he was robust, while gentler with an older participant I’d perhaps compare to Gorgias. But with one of the youngest participants (who was in the process of disengaging from a Marxist and perhaps revolutionary path), Voegelin took quite a different approach, that of Socrates helping to lead a genuine inquirer towards the unmentioned Agathon. Though it wasn’t to him that he said that philosophy was “the service of the gods” (echoing, I think, Marcus Aurelius, or maybe the Euthyphro), that was the tone of his whole advice to this younger searcher. In fact, that younger man played and replayed the tape of his dialogue with Voegelin to the point that it became one of the more important threads in the fabric of his life.

My way of recalling Voegelin as a teacher here will be to simply read some passages from letters Voegelin wrote to me, because, even as a correspondent, he took on the role of the kind of teacher Tilo [Schabert], Thomas [Hollweck], and Ellis [Sandoz] have already outlined. I’ll start with his letter of June 14, 1972, (3) where he already was drawing me into what Tilo has so well explained was his “workshop”:“I am delighted to lea

rn that you are a psychologist, and I would appreciate it greatly, if you would let me know on occasion what from the psychological side has been done to interpret such phenomena as the ones treated in the enclosed essays on Hegel and Henry James. I am always in difficulty with terminology, because obviously there is a split of personality, something like a schizoid character, but certainly not a schizophrenic case in the clinical sense. Unfortunately I have found little help from my casting around in psychological literature. Perhaps you know more about such questions than I ever will.”

This was to a doctoral student, treating me somehow as an eminent colleague. How could you not want to enter into dialogue with such a democratic teacher?

In his letter of August 10, 1972, (4) he replied — again as someone appreciating help from wherever he could get it:

“Thank you for your long letter of July 22.”

“There were so many interesting references in it that I had my secretary make a typescript of it, so that I could read it more easily.”

He went on to deal with my problem with the famous “non-existent reality” of his “Immortality” essay:

“For the moment let me only say that the use of the term ‘non-existent reality’ is not haphazard. At the present stage of our empirical knowledge of early civilizations the problem of “non-existence” as the chaos over which the order of the cosmos is built is fundamental.”

“Only with the development of the ‘Unknown God’ beyond the intra-cosmic gods does the problem of “non-existence” go over into the new type of transcendent god. Since in a scientific study I cannot limit my perspective to the Christian-theological horizon, such unaccustomed terminology is unavoidable. There are further reasons for this usage, but we can talk about such matters perhaps in Dublin.”

When rereading these letters after many years for this round table, I came to appreciate Voegelin’s style as a teacher — offering encouragement and carefully thought-out correction in equal measure.

“Now let me thank you for your kind help in further penetrating the megalithic enigmas, especially for the articles on Knowth by Eogan(6). About your interpretation of symbols by means of number speculation, I am a bit skeptical — not because you could not be right, but because it would be too beautifully simple. That is not to say that I have any better explanation, but I am accumulating also petroglyphs from Indians [Native Americans] — and some, the obviously cosmological ones, are the same, while others differ widely. I would not risk an interpretation before I have more comparative materials.”


This reminds me of one of the remarks he made of himself when he visited the Irish megalithic monuments in Newgrange, and the then just excavated sites in the North West of Ireland now called Céide Fields (7) — miles and miles of stone walls preserved under four and a half millennia of turf indicating a highly organized neolithic farming culture. When I asked him, more or less point blank, why a philosopher would be wasting his time visiting such sites, Voegelin answered, “I am an empirical anthropologist.” He explained that while he couldn’t put in the years of archaeological work to discover and explore such sites, when that work was done, it was his task to try to understand it in the context of what I understood to be a philosophical anthropology, even if Voegelin’s framework was richer even than that.

Replying to an essay where I used as well as I could his understanding of anamnesis at the personal, social, and historical dimensions to interpret Solzhenitsyn’s (8) work, he wrote in May 8, 1976:(9)

“Thanks ever so much for your essay on Solzhenitsyn. It is an excellent piece of work, going to the core of the experiences which move Solzhenitsyn. And I am very happy that my own analysis of experience could be of such obvious help in bringing out the decisive points.”

Perhaps for me his most important letter contained some comments he generously made in December 21, 1976 (10). As before, not only did he carefully read a long partial draft of my Ph.D., commenting encouragingly on various points, but he went on to make a fundamental criticism. First, the encouraging remarks:

“Thanks for your charming letter, and for the Ms on the ‘human person.'”

“I have read the Ms immediately, and am greatly impressed by the enormous amount of reading you have pressed into this psychology of the person. Your use of the ‘Oedipus’ is splendid, as is the use you make of Dostoevsky and Solzhenitsyn. What interested me most was your classification of the ‘destructure’ phenomena in #3. Of course, I am in agreement with what you are doing, but I do not yet quite see how you connect this conception of the person with the problems in contemporary psychopathology, as for instance the discovery of chemical causes behind certain mental disturbances, etc. I have also my doubts about your reliance on Laing for the problem of schizophrenia at large. There is more to schizophrenia than Laing sees in it.”

But now for the substantive weakness he diagnosed in my work — I’d been trying to elaborate an understanding of the human person in terms of his or her orientation towards beauty, truth, goodness, and mystery, but had obviously not given my key notion of love its required historical grounding. What he says fits in very much with some comments William Petropulos was making yesterday, and exposed, perhaps, my desire, in the rather secularist atmosphere of my university, to avoid calling a spade a spade, thus, in fact, deforming the experiences I wished to employ:

“The only point at which I am seriously wondering is your reliance on human love. Where does this love come from, unless it is the divine love that lives in us and obliges us to let it live? Isn’t there a bit too much Buber in your I-Thou relationship? And isn’t there the danger of derailing into the Sartrean determinative relation of the self to the other? Just questions. I am sure you have considered these problems yourself.”

In my letter to him which this letter was replying to, I’d suggested (as far as I remember) that the prayer of Jesus in St John’s Gospel, chapter 17, “That all may be one,” was something that he was helping to bring about at a philosophical level by his reaching out to all of humanity, from the paleolithic period to our own. He continued:

“Reading your letter together with the Ms has very much touched me — you have gotten the point of my work. If we don’t respect those who have gone before us, who will respect us when we are gone? If we exclude the community of mankind, the community will exclude us.”

Certainly I came from a background quite different than Voegelin’s, immeasurably less informed and less thought out. Yet Voegelin would work on the manuscript of a comparative stranger as if I were his own doctoral student. And his spiritual authority was so delicately asserted and gifted that it seemed to echo from within the student’s heart as if it were from himself.

[Paul Caringella remembered typing out what was Voegelin’s last letter to me, on December 25, 1984, (11) shortly before he died, which I’d intended to read out, so I asked him to read it for me:]

Thank you for your Christmas greeting.

I am rather ill, probably not to last too long, but nobody knows how long.

All good wishes for the New Year to you.

I’m no Robert Heilman, but rereading these and other letters for this presentation made me appreciate very well Charles Embry’s account of Heilman’s regret in not corresponding more with such a magnanimous soul as Voegelin’s. And yet I’m enormously grateful for the privilege of having had him, even at a distance, as indeed a masterly and Socratic teacher.

(1) One participant did not wish to have his name used so is listed as “Anonymous” in “The Irish Dialogue with Eric Voegelin.”

(2) Complete texts of the Jowett translation of the Dialogues of Plato, including the Gorgias, Symposium, and Euthyphro can be found at The Internet Classics Archive: Plato, where may also be found the Long translation of the Meditations of Marcus Aurelius.

(8) You may read more about Alexander Solzhenitsyn at the Nobel Laureates website.

(10) Previously published in Vol. 30 of the Collected Works.

(11) Previously published in Vol. 30 of the Collected Works.

Brendan Purcell is a Board Member of VoegelinView and an Adjunct Professor in Philosophy at Notre Dame University in Sydney. He is author of several books, including From Big Bang to Big Mystery: Human Origins in the Light of Creation and Evolution (New City, 2012).