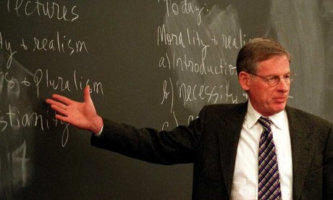 In my last essay, I wrote about Leo Strauss’ defense of liberal education as a possible antidote to the narrowness of specialization of knowledge and the moral aimlessness of positivist ideology. One way to teach liberal education is to have students read the great thinkers of one’s tradition. In his chapter on Harvey Mansfield in Teaching in an Age of Ideology, Travis D. Smith writes about how Mansfield breathes new life into old books, ask students to be courageous, and invite them to participate in the conversation about the true, the beautiful, and the good.

As the William R. Kenan, Jr. Professor of Government at Harvard, Harvey Mansfield is not only a prolific scholar, sophisticated patriot, and one of the best known public intellectual of conservatism but he is also an outstanding teacher who challenges his students’ preconceptions and prejudices where they will feel at unease but not displeased with the world. Raising more questions than resolving them in the classroom, Mansfield pitches his lectures slightly over the heads of everyone in class to engender puzzlement, confusion, and frustration in the hope that students realize that genuine education is neither glib performance nor academic condensation but to be shaken at the soul from the dogmatic laziness of our contemporary culture. The starting point of liberal education therefore is not one of self-satisfaction or skeptical smugness but a genuine wondering of the world that is prompted by puzzlement and bewilderment.

Speaking in accessible rather than jargon-laden language, Mansfield explores the author’s ideas as if they were his own and draw out the implications, assumptions, and incongruities in the arguments. He leads his students through the books in a spirit of wonder and thereby causing students to wonder about themselves, the things they hold dear, and the things that they should value in their lives. Instead of expounding upon a theory or aping after the latest academic fashion, Mansfield’s style is more suggestive and consequently more inviting to students to return to the text to figure out the questions that were raised in the classroom. What is more important than reciting the right answer for Mansfield is for the student to discover how to ask the right question that the author, and maybe the student, is trying to ask.

To combat the prevailing ideologies of modernity, Mansfield encourages students to be responsible for themselves in their thoughts, their actions, and their beliefs. To be responsible for oneself in turns requires one to accept risk and be courageous. When an “A” student at Harvard therefore receives a B’s or C’s in his class, Mansfield is not only evaluating the student’s assignments as it should be but also challenges the student to take responsibility for his or her own work and to have the courage to do better. Students often react in gratitude for Mansfield’s candor of their work but also fear that the low mark will hurt their chances at law school or on Wall Street. Their reaction to their grades is a reflection of a desire for genuine education and the implicit recognition that higher education is corrupt where everyone receives an A and where equality rather than excellence is the prized virtue.

Thus the age of ideology is not only marked by historicism, relativism, positivism but also by a cultural undercurrent of equality at the expense of excellence. Although the watering down of academic standards of our schools continue – or, to be more precise, the transformation of academic standards to appear to be rigorous to accreditors rather than to teachers – there are those who still hold the waves of mediocrity at bay, like Harvey Mansfield. Courage consequently is not only for students but for teachers, too, in asking themselves to be responsible in holding their students to the highest academic standards possible.

But for those professors without tenure or do not teach at a place like Harvard, the question remains how one can be courageous and responsible while, at the same time, hold onto their position with the increasing demands of assessment, accreditation, and the mindset that every student is excellent. How can professors make sure their classes have full enrollment to satisfy administrators’ budgets while evaluating students as they should be instead of how they are entitled? Although it may be possible to pursue the true, the beautiful, and the good at institutions like Harvard, is it possible elsewhere? Or are we doomed to a culture of academic equality and intellectual mediocrity in this age of ideology?


This essay was originally published in The Imaginative Conservative on May 17, 2013.