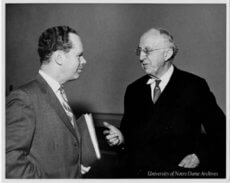 In my previous essays about teaching in an age of ideology, I had looked at two teachers – Eric Voegelin and Ellis Sandoz – who sought to clear the ideological rubble in the modern academia so students could study the true, the beautiful, and the good. In his accessible lectures about complicated philosophical topics, Eric Voegelin elicited an erotic restlessness in his students in order to prompt them in their own search for the true, the beautiful, and the good, while Ellis Sandoz asked his students to reflect upon their own experiences to see whether the subjects they were studying comported with their commonsensical understanding of reality. For both professors, teaching was not the mere recitation of facts and figures to be quickly remembered, recalled, and forgotten but rather it was the incarnation of thinking itself. To teach was to be the incarnation of what one sought, and what they sought was the true, the beautiful, and the good.

Another professor who belongs to this class of teachers is Gerhart Niemeyer, as Michael Henry expounds in his chapter from Teaching in an Age of Ideology. Niemeyer was born in Germany, studied law, and fled to Spain, after Hitler came to power, and later to the United States, after the outbreak of the Spanish Civil War. He taught law and politics at Princeton University, where he directed the dissertation of his first doctoral student, John Hallowell (who will be the subject of my next essay). He left Princeton for various academic and governmental positions and eventually landed at the University of Notre Dame where he spent almost forty years of teaching and writing. Perhaps the biggest spiritual and intellectual moment in his life was his conversion to Christianity in the 1940s when he was trying to make sense of the breakdown of Europe with the rise of fascism and communism and from his intellectual encounter with Kierkegaard and Augustine and his personal conversations with Eric Voegelin.

As a teacher, Niemeyer was a combination of old world formality and personal warmth and generosity of spirit (apparently he always addressed his students by their last names preceded by Mr. or Miss). He was an exacting grader and sought a clarify in thinking for both himself and in his students, for he believed that it was the lack of clear thinking that led to the collapse of Europe to ideological movements. Like Voegelin and Sandoz, Niemeyer conceived of teaching as showing his students that the intellectual life was a quest for the true, the beautiful, and the good. He did not seek disciples but wanted intellectual progeny who, as teachers, would pass on the tradition of accumulated wisdom to the following generation. It was in these small circles of teaching and learning that Niemeyer believed that the ideological damage of the twentieth century could be alleviated and lead people back to inquiry about the true nature of reality.

It is this circle of friendship and fellowship that became the core of Niemeyer’s class that allowed him to say what he believed with conviction and authority but without slipping into dogma and despotism. Niemeyer understood his role as a teacher as acting as an elder friend in the tradition of Socrates who help the young grow into a spiritual maturity that will lead them into a genuine questioning. For it is this genuine questioning about ourselves and reality in which we live that inspires our desire to learn about the true, the beautiful, and the good. This type of “wondering questioning” was what Niemeyer instilled in his students, as they strove to become spiritually and intellectually mature teachers who sought clarity in thought, warmth in relations, and openness to reality.

Niemeyer therefore was a teacher in the same vein as Voegelin and Sandoz: someone who was the incarnation of what they believed, nudged students onto a path of genuine questioning, and avoided ideological indoctrination. Although he taught with authority and conviction, Niemeyer also was humble, curious, and compassionate in his search for the true, the beautiful, and the good. From the recollections of his students, it appears that these are the features of Niemeyer as a teacher that they remember – and cherish – the most. In some sense this is not surprising, for it would seem that these characteristics – humility, curiosity, and compassion – are necessary to avoid ideological teaching and thinking. More than anything else, perhaps, this is what we can learn from Niemeyer as a teacher.


This essay was originally published in The Imaginative Conservative on February 13, 2013.